Several months ago, Senator Elizabeth Warren unveiled a campaign to “make banking boring” by reinstating a modern version of the Glass-Steagall Act and separating basic financial activities — checking and savings accounts — from the riskier parts of investment banking. The idea that banking should be boring has caught on, not just among Warrenites, but among people like Senator John McCain and former Citigroup chairman Sandy Weill.

The bad news: Senator Warren’s Glass-Steagall 2.0 bill hasn’t gone anywhere, and probably never will. The good news: Banks are getting amazingly dull all by themselves. In fact, Warren may want to adjust her message, because the era of boring banking is, in a sense, already here.

This morning, Morgan Stanley — a bank that was once crammed with casino gamblers like every other big bank, but whose CEO decided several years ago to boring-ify it by focusing on (zzzz) wealth management instead of bond trading — had its strategy validated in a big way. The bank wowed investors by reporting $906 million in profits last quarter, with the largest gains coming in the snooze-worthy brokerage business. It even generated more revenue than Goldman Sachs — an occasion that once would have been like having the Washington Generals beat the Harlem Globetrotters.

Meanwhile, the banks that have decided to stick to their strategy of building huge, risk-filled trading units are suffering. Goldman, for one, made 44 percent less money in its once-powerful FICC (fixed-income, currency, and commodities) division last quarter than it did a year ago. JPMorgan Chase had a bad quarter as well — except in its “consumer and community banking” division, where profits rose by 15 percent.

Here’s how Morgan Stanley’s stock price stacks up to its rivals: 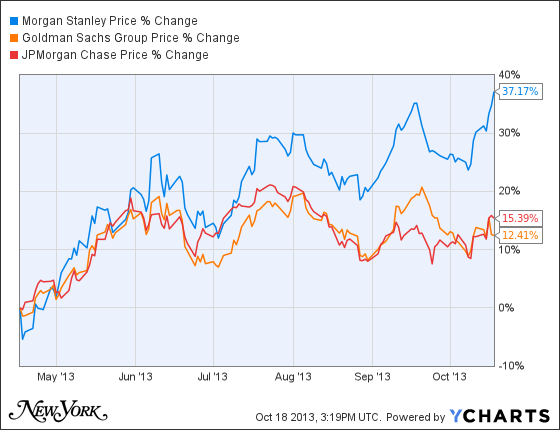 The slow death of Wall Street’s old casino model — in which “investment bank” was really a misnomer, since bond trading, mortgage derivatives, and other nontraditional banking activities were really pulling in most of the money at most firms — has alarmed the financial sector’s old guard. The Times reports that analysts now believe that the boring-is-better trend among investment banks “is not short term and could be the new normal.”

You can kind of see why this would be worrisome. Banks, especially old-line investment banks like Goldman Sachs, have survived for decades by aggressively pursuing whichever asset class was in vogue at the moment. In the eighties, they flooded into bond trading. In the nineties, they built huge commodities-trading arms. This ability to shape-shift — to follow the money and wring profits out of everything they touched — is what separated them from their dullard commercial-banking peers, who made money by taking in deposits and lending out money at higher interest rates. But now, with a rising stock market and a more tightly regulated sector, the hottest asset class is the boring stuff. And the firms that have been too proud or short-sighted to follow that trend have been hurt by their hubris.

Meanwhile, the Journal reports that money-management firms like Charles Schwab — which used to be sneered at by Wall Street investment banks — are having their best year ever. “Schwab posted third-quarter net income of $290 million, a 17% increase from the same period a year ago. Schwab said total client assets rose 13% from a year earlier. Third-quarter revenue of $1.37 billion was the highest in 13 years.”

As people like Elizabeth Warren love to note, the regulations put in place after the financial crisis have been watered down and systematically undermined by the financial sector’s lobbying. But while better regulation is still needed, these new rules are still doing their most basic job, which is to incentivize the kinds of things we want banks to be doing (lending responsibly to qualified borrowers, building up safe, explosion-proof asset-management businesses) and deter them from proprietary trading, subprime lending, and the other things that got them in trouble in 2008.

These are real, genuine changes, and they’re shocking, once you stop to think about them. Bloomberg View columnist Matt Levine, writing about Morgan Stanley’s transformation, is almost incredulous that a Wall Street investment bank has actually succeeded by making itself less of a casino:

Morgan Stanley seems to be de-risking by cutting back on risky activities, and responding to new regulations by obeying them. That’s … I feel terrible saying this, but that’s weird. That’s not how it’s done … It’s like Morgan Stanley really believes that the government is client number one, and that their aim is to please and delight, rather than just minimally appease, their regulators.

One upshot of the boringification of the financial sector is that Wall Street firms (and, by extension, the rest of the economy) are slightly less likely to implode. Another subtler but important change is that Wall Street’s career hierarchy has shifted. “Equities in Dallas” used to be shorthand for the most undesirable, powerless job at a firm (it’s a reference to Michael Lewis’s Liar’s Poker). If you wanted to make money, and move up on the career ladder, you wanted to be in bond trading, commodities, rates, or some other exotic area of finance.

But now, with plain-vanilla stock trading becoming one of the more profitable activities on Wall Street (Morgan Stanley’s stock-trading revenue jumped 31 percent last quarter), the prestige has migrated. Now, if you’re a young banker considering where to spend your career, you might well jump at the chance to sell equities, in Dallas or anywhere else.

THE FEED
8/14/2022
what we know
what we know
Salman Rushdie Is on the ‘Road to Recovery’ Following Gruesome Attack
By Chas Danner and Victoria Bekiempis
The acclaimed author was grievously wounded and remains hospitalized but was taken off a ventilator and again able to speak on Saturday.
8/14/2022
the city politic
the city politic
New York Times Sticks It to Progressives in New York’s Democratic Primary
By Ross Barkan
The editorial board’s backing of Dan Goldman, Jerry Nadler, and Sean Patrick Maloney for Congress also shows a disdain for identity politics.
8/14/2022
u.s. capitol
u.s. capitol
Man Dies by Suicide After Driving Car Into Barricade Near U.S. Capitol
By Chas Danner
The man drove into a barricade and fired a gun in the air, but police don’t seem to believe he was targeting any members of Congress.