My partner, Miles Smith, and I awaited October 1, the first day of open enrollment for Obamacare, all summer. After quitting his job at a Washington, D.C., television station earlier this year to go back to school in Michigan, Miles tried to buy an individual policy on the open market, only to be rejected for a (minor) preexisting condition. Since then, he’s been stuck paying for a very expensive COBRA policy. As an example of the extent to which we have planned our lives around the advent of Obamacare, we postponed getting legally married so he would be in the best position to benefit from the program’s income-based subsidies.

Despite bipartisan warnings of glitches aplenty in the new system, we nonetheless decided to lock in his new coverage as soon as we could. This is one couple’s messy 21-hour journey into Obamacare.

October 1, 2 a.m.: Wired after live coverage of the shutdown on MSNBC, we log on to healthcare.gov. Rachel Maddow, after all, told us after midnight the government was closed and the exchanges were open.

The greeting is promising …

… and we fill out the registration form with ease.

2:14 a.m.: Miles receives a verification e-mail. Check. But when he clicks the link, these messages appear: 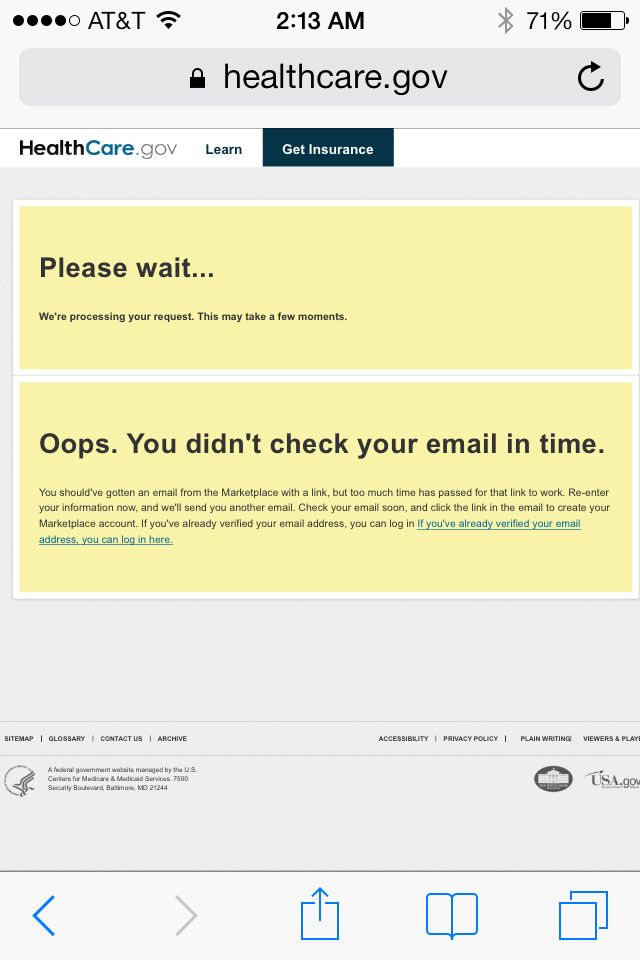 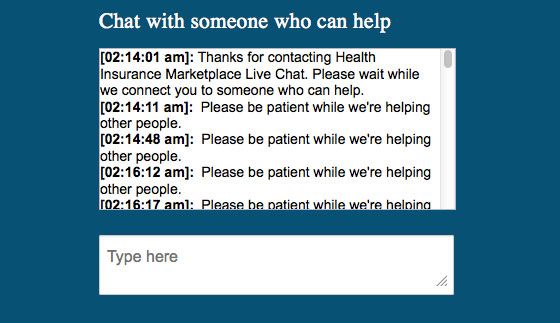 2:43 a.m.: In our chat window, we get a response from someone named Eliza. But our attention has drifted, and by the time we see her message seven minutes later, she is gone.

2:51 a.m.: Eliza is back! Miles explains to her that the link from the e-mail doesn’t work.

Eliza — who we are beginning to suspect is a bot — then punctures any hope of getting insurance before morning: “I apologize for the inconvenience. We have escalated this issue. Online access will be available at 8am Eastern Time. Please try again at that time.”

3:14 a.m.: Miles finally gives up on having his phone call answered, and we go to sleep.

12:17 p.m.: It’s a new day with new hope! After an unsuccessful attempt to log in with his user name and password, Miles again calls the toll-free number. An attendant picks up within two minutes. She has a thick Southern accent. “A lot of people are calling with the same problem,” she says. “All I can tell you is to wait five minutes or wait an hour and try clicking on the verification link again. If that don’t work, try entering your information again.”

“Poor thing,” Miles mutters to me as he hangs up the phone.

1:22 p.m.: Obama delivers his Rose Garden speech spanking Republicans. He says 1 million people have been on healthcare.gov shopping or signing up for coverage. Meanwhile, this is what we see: 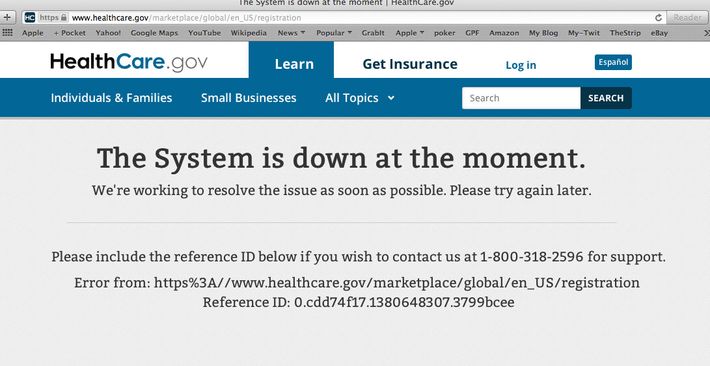 1:44 p.m.: We try reregistering, but the security questions aren’t working.

1:47 p.m.: Miles opens Firefox and closes Safari. That helps with the security questions … but now the site is down again.

5:17 p.m.: After a break to run errands and host the maintenance guy to “winterize” our sprinklers, Miles tries again to register. The security questions, which had appeared on Firefox but not Safari earlier, now are missing on both browsers.

6:04 p.m.: It is our ninth anniversary, and we have imminent dinner plans. Miles tries the chat window again. Nineteen minutes later, “Chris” joins him and suggests Miles call the toll-free number. “The people on the phone will explain all the plans and benefit details, give me the prices, explain my subsidy options, and fill out my application for me?” he asks. “Yes,” Chris says. We don’t believe him (her?) — and we have to leave for dinner.

10:35 p.m.: Full and getting sleepy, Miles tries his I.D. and password again. It works! He moves through several screens with ease …

… before hitting a wall at the contact-information page. The site won’t believe he’s him:

We look closer. The form is asking for Miles’s e-mail address, but there’s no field to enter it.

10:44 p.m.: Miles calls in one last time. His wait time is predicted at five minutes.

10:49 p.m.: A woman with a thick New York accent joins him right on schedule. She confirms that she is empowered to go over the four plans with him and sign him up if he wishes. Or, she says, he can wait a couple of days and try the website again.

10:56 p.m.: After getting some details, Miles decides he doesn’t have the stamina to do this on our anniversary. But, in theory, we have finally broken through the morass of glitches — here is someone who can register Miles for health insurance. Still, we’ll ink the deal tomorrow.