One of the two bridges spanning the length of Madison Square Garden.

Madison Square Garden has undergone major renovations — or a “transformation,” to use their preferred word — over each of the past three summers. The finished product will be unveiled to the public tomorrow night, when the Knicks take on the Bobcats in a preseason game, but officials showed off the building’s new look earlier today. 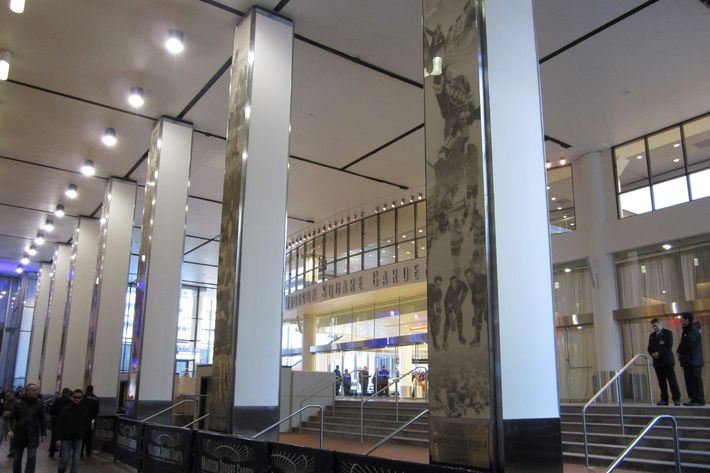 The Seventh Avenue entrance was totally redone this summer. The arena doors are now located at the top of these steps, in front of the entrance to the theater. (Previously, the doors were located closer to the box office.) 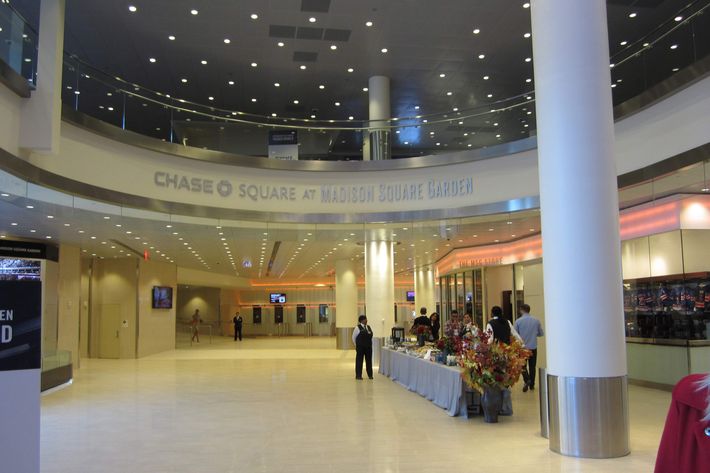 Beyond those doors is an area called Chase Square, which is more open than this space was pre-renovation. On the right of this photo — taken from the south side of the lobby area — is a Madison Square Garden store. To orient yourself: In the back of this photo is the box office, and the ramp that leads to the turnstiles is to the left of the ticket windows. 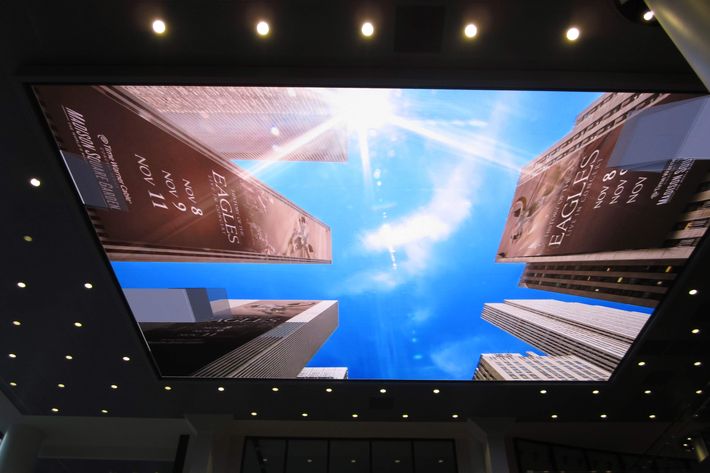 On both the north and south sides of Chase Square, just beyond the arena doors, there’s a video board built into the ceiling. This photo was taken during a video presentation shown during today’s press conference. It’s just like looking up at the real skyline, in a horrifying version of the city where all the buildings are covered with ads for Eagles concerts! 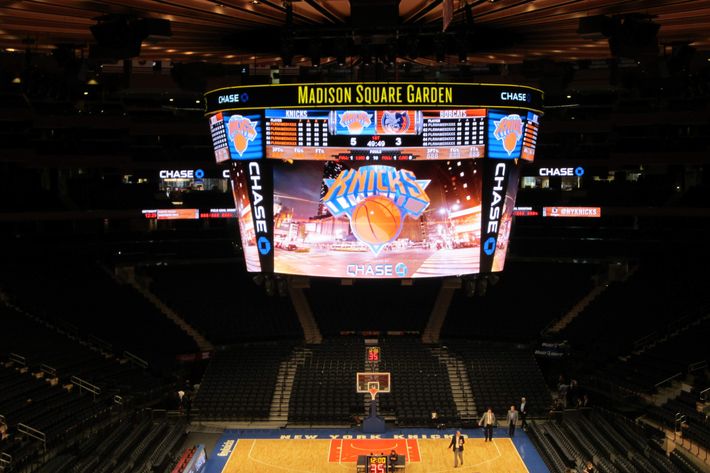 The new, larger center-hung scoreboard. During the press tour, that Knicks logo was the only image shown, but at first glance it appears to be a big improvement over the old scoreboard.

Smaller screens are built into the bottom of the scoreboard for fans with seats near the ice or court — and for the players themselves to look at, if necessary. 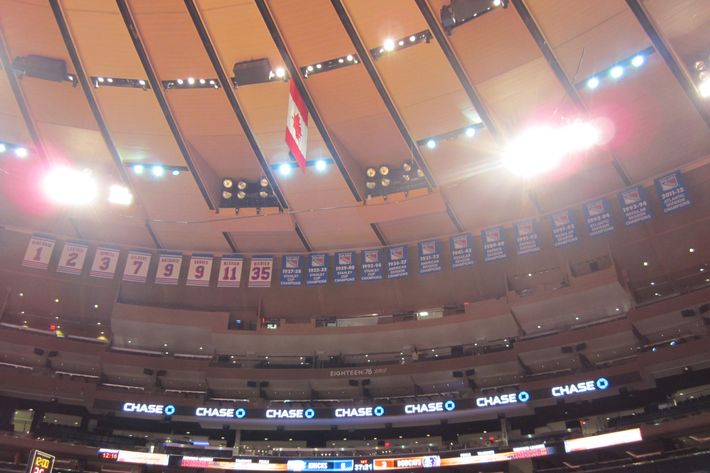 All the Rangers banners are grouped together on the Seventh Avenue side of the arena. (At least some of these banners appear to be updated versions of the ones that had been hanging in the Garden. Curiously, there’s no banner for the Rangers’$2 1994 Eastern Conference title.) There’s also a second LED ribbon board on both the Seventh Avenue and Eighth Avenue ends of the arena. (Update: We reached out to the Garden and learned that they decided not to include conference title banners for either the Knicks or Rangers if the team also won the championship that year.) 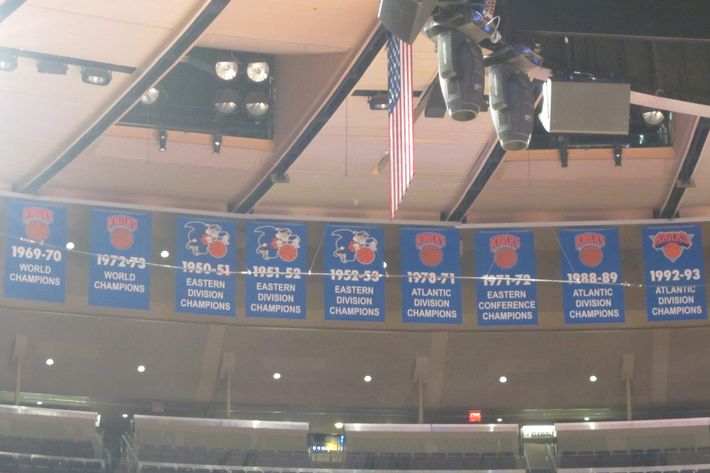 There are new versions of the Knicks’ banners, as well. Note the era-specific logos. (The use of the old Father Knickerbocker logo is particularly awesome.)

The Garden added ten more “Defining Moments” displays in the concourses this year. This one commemorates the Rangers’$2 1994 Stanley Cup title. (That’s the jersey Craig MacTavish was wearing when he took the final face-off in game seven of the finals.) Other new displays include Larry Johnson’s four-point play in 1999, and Syracuse’s six-overtime win over UConn in the 2009 Big East Tournament. 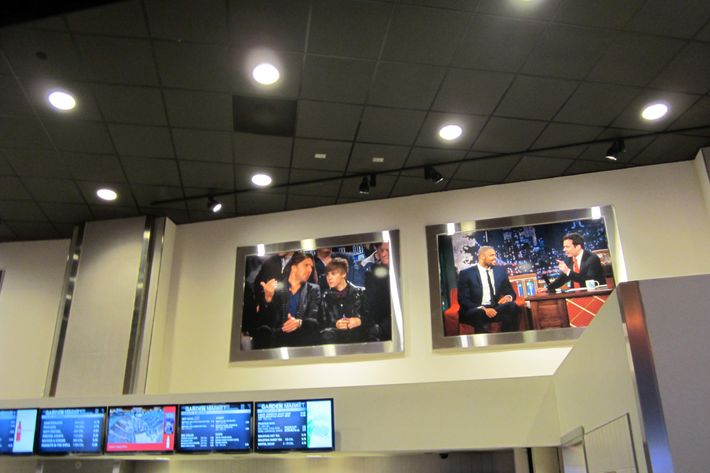 This is a photo of Rangers goalie Henrik Lundqvist and Justin Bieber. (It’s part of a series of photos, on the eighth floor concourse, of players away from the ice or court.) 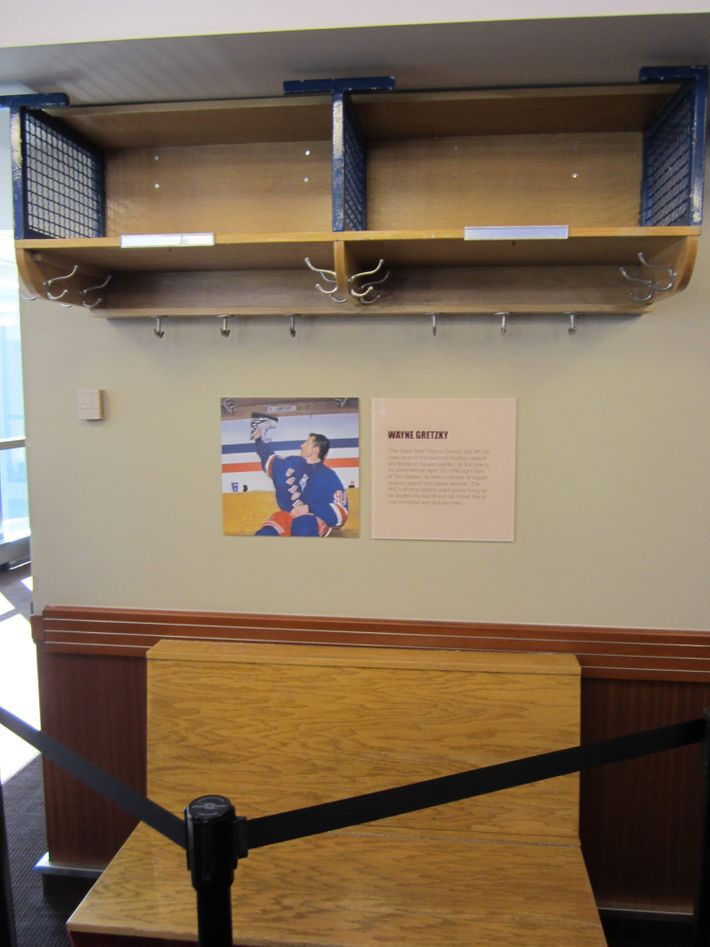 The good news is the Garden has added a bunch of cool displays, like this one with Wayne Gretzky’s locker. The bad news is you need to have a ticket on the Signature Suite Level to see them.

The walkway on one of the two Chase Bridges that span the length of the arena. The bridges actually blend in better than we expected them to. (You can get a sense of this from the photo at the top of this post.)

The first row of seats on the northern Chase Bridge.

The view from the northern Chase Bridge. We only spent a few seconds in these seats during the tour, but when facing the court, it didn’t feel drastically different than sitting in the front row of the upper level in any other arena. (The major difference is that, instead of looking over a railing, you’re looking through a pane of glass, similar to the design of the West Balcony seats installed last year.)

Our biggest concern about the bridges is that they’d obstruct the views of the seats in the back rows of the main seating bowl. But the views from these seats weren’t as bad as we expected. This photo was taken from the last row, and though the main scoreboard is blocked, it doesn’t feel as cramped as we feared. (There are smaller video boards built onto the back of the bridges.) The real test will be whether fans walking along the bridge will be a distraction during an actual game. For what it’s worth, Garden officials insist it won’t be. Today’s tour didn’t include a visit to the blue seats on the Eighth Avenue side of the building, though Hank Ratner, CEO of the Madison Square Garden Company, said that there are no obstructed views there, even in the back rows.

The new capacity for hockey will be 18,006; for basketball, it’ll be 19,812. That hockey capacity is roughly 200 seats fewer than the pre-renovation number of 18,200, though a Garden spokesperson says the actual capacity has been fluctuating in recent years, so the building hadn’t necessarily held that many for Rangers games in recent seasons.