Today, the Bitcoin experiment took a spectacular new turn when the FBI charged Ross Ulbricht, a 29-year-old hacker who went by the alias “Dread Pirate Roberts,” with running Silk Road, the online bazaar that sold all kinds of illicit drugs, illegal weapons, and shady services through anonymous Bitcoin-based transactions. (Ulbricht was also accused of, among other things, hiring a contract killer to take out a potential threat to his Heisenberg-like empire.)

The Silk Road community is freaking out, as it should be — the federal seizure of $3.6 million-worth of Bitcoins and data related to the site could mean that users’ identities could be compromised as well, and of course they’ll have to go elsewhere for their drugs and firearms from now on. But beyond the immediate response to Ulbricht’s arrest, Bitcoin enthusiasts who hope to take the currency mainstream should be breathing a sigh of relief. In fact, the closure of Silk Road is the best thing that could have happened to Bitcoin.

This seems counterintuitive, given the sharp drop-off in Bitcoin prices following news of Ulbricht’s arrest: 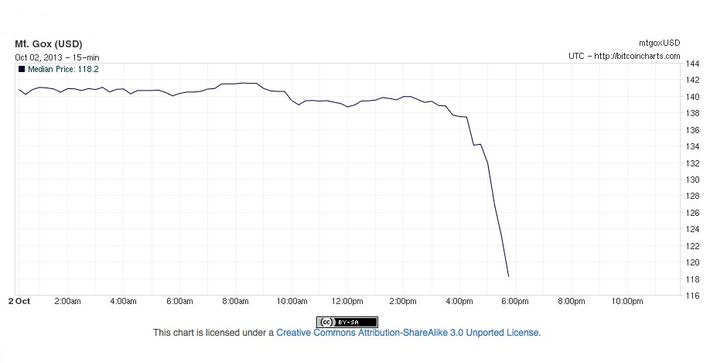 But look at the long view. Bitcoin, since inception, has been struggling to shed its image as a tool for money launderers, drug dealers, and other online ne’er-do-wells. During its boom cycle this spring, hardly a story about Bitcoin went by without multiple mentions of Silk Road or other criminal activity taking place using the currency.

That muddled reputation was fine back when Bitcoin was a hacker hobby and not much else. But now, with legitimate venture-capital firms pouring money into Bitcoin technology and ETFs and trusts popping up to allow normal people to speculate on Bitcoin prices, the currency’s countercultural reputation is a serious liability. Forget the drug deals — would any normal person invest money in a financial instrument that was being actively targeted by every regulatory agency under the sun?

The problem, for those pushing for Bitcoin’s mainstream adoption as an alternative currency, has always been how to flush the bad guys out of the system. You can’t stop Bitcoin transactions from certain regions or accounts, since they don’t take place over a regulated exchange. And you can’t keep shady people from using Bitcoin, since the currency’s anonymity accounts for much of its appeal. The only thing you can do is shut down the places where the bad guys tend to congregate. Silk Road, which has done $1.2 billion in sales since 2011, according to the FBI’s complaint, was the global headquarters for Bitcoin-based criminal activity. And it might have remained safely in the shadows, had Ulbricht not slipped up and (allegedly) given himself away.

Bitcoin does have promising noncriminal applications. It’s a good, frictionless payment mechanism and could be fused with existing services like PayPal or Venmo to make paying for things across the world a much easier and cheaper experience. I’ve always thought that, with the right infrastructure, Bitcoin might actually succeed as a supplement to existing currencies.

But it wasn’t going to happen as long as normal people — people who don’t use Tor and PGP encryption — thought of cocaine and AK-47s whenever they heard the word Bitcoin. Now Silk Road’s closure (and the fact that the FBI has likely deterred other potential Bitcoin drug kingpins from starting up replacement sites) means that the people fighting to legitimize Bitcoin can credibly claim that the old days of the crypto-currency as a tool for vice are over. And after Bitcoin prices stabilize, these people can make a push for a new beginning.

THE FEED
11 mins ago
politics
politics
Rudy Goes on Media Blitz After Supposed Near-Fatal Slap
By Benjamin Hart
The man who clapped Giuliani on the back on Sunday has been arrested for second-degree assault.
7:00 a.m.
#metoo
#metoo
The First Female Referee in WWE Says Vince McMahon Raped Her
By Abraham Riesman
Rita Chatterton does not want to be forgotten.
6/26/2022
life after roe
life after roe
Outrage, Uncertainty, and Instant Abortion Bans After Roe v. Wade Overturned
By Intelligencer Staff
Some Republican leaders are already calling for a nationwide ban, while protesters assemble outside the Supreme Court to express their outrage.