You’ve probably heard the big start-up news of the week: Snapchat, the disappearing photo-sharing app, reportedly turned down a $3 billion acquisition offer from Facebook. Tech watchers are agog at the decision, which they either think is a brave display of independence or a horrible, hubristic mistake for a start-up that makes no money and should have jumped at the chance to cash out.

Opinions on what Snapchat’s co-founders, Evan Spiegel and Bobby Murphy, should have done are as numerous as the stars. But not enough attention has been paid to why Snapchat turned down Facebook and the game theory behind such a huge decision.

Timing the sale of a tech start-up correctly is an extremely risky proposition, especially for companies with explosive growth and minimal revenue. Accept a lucrative offer too early, as some people apparently think Instagram did, and you’re missing out on an even more lucrative offer that could have come up later. But wait too long, and you risk peaking, and becoming one of those Silicon Valley tragedies like Friendster — which passed up a $30 million offer from Google, right before it got eclipsed by Facebook and veered into irrelevance.

The three best-timed start-up sales I can think of are OMGPop (sold to Zynga), Bebo (sold to AOL), and original MySpace (sold to Newscorp). Each sold at the very top of their curves, days or weeks before growth slowed and decline began. For a start-up that is destined to be a short-lived phenomenon, this is the optimal outcome.

When it was considering selling itself to Facebook, the question, for Snapchat, was whether it was more of a MySpace or more of a Facebook — whether disappearing photos are a fad, or part of something more enduring. Given both possibilities, there are four possible outcomes. 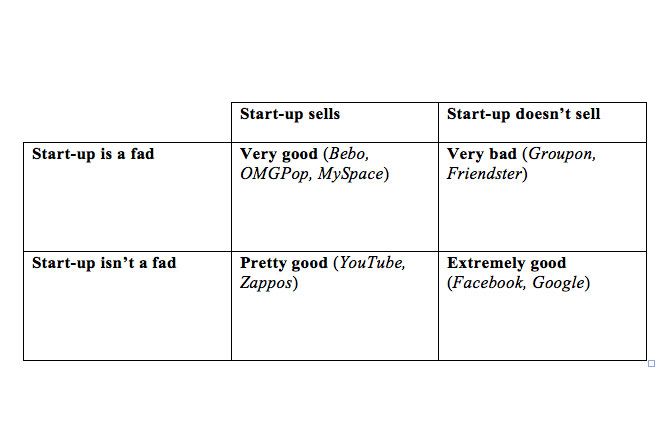 If you sell out and accept a lucrative acquisition offer, you’ve got two ways to win: your start-up fades from view and you’ve cashed out at the right moment, or your company grows under its new ownership and you’re still rich (because you accepted a lucrative offer). Both are great outcomes.

But Snapchat is most likely betting it will end up in the lower-right quadrant. It looks like Spiegel and Murphy are intent on staying solo: They reportedly turned down other billion-dollar deals from Tencent and Google, and are going to raise another boffo funding round next year instead of entertaining more acquisition offers. And $3 billion should be near the peak of what Snapchat could command in a sale: There are only a few companies with both the cash and the incentive to buy at that scale, and Facebook was the most likely candidate.

So Snapchat probably wants to be Google, Facebook, or Twitter, all of which turned down early acquisition offers, then went public and became some of the world’s biggest companies. This is the most lucrative quadrant for founders, who often become billionaires if the gambit works, but the downside is that it’s extraordinarily hard to do. If you guess wrong, you’ll end up on the upper right.

Spiegel and Murphy doubtless believe in their business. But I have another, less quantifiable theory about their decision — it has to do with the fact that, ever since Mark Zuckerberg turned down Yahoo’s $1 billion offer, it’s become a badge of honor in Silicon Valley not to sell your company to an established tech giant and a sign of weakness if you do. In other words, Facebook’s founder might have given his targets the best reason not to sell.