Guns & Ammo, a popular magazine about firearms, does not welcome a diversity of ideas. In fact, it actively seeks to stamp them out. Contributing editor Dick Metcalf, a veteran of Shooting Times, has been straight-up fired for his December back-page opinion column titled, mildly, “Let’s Talk Limits.” Guns & Ammo does not talk limits.

In conclusion, Metcalf makes clear that these are just one man’s thoughts: “I don’t think that requiring 16 hours of training to qualify for a concealed carry license is infringement in and of itself,” he writes. “But that’s just me …” Can you believe it?

Guns & Ammo readers cannot believe it. His take sparked a response that could be accurately described as a mob with semi-automatic pitchforks: 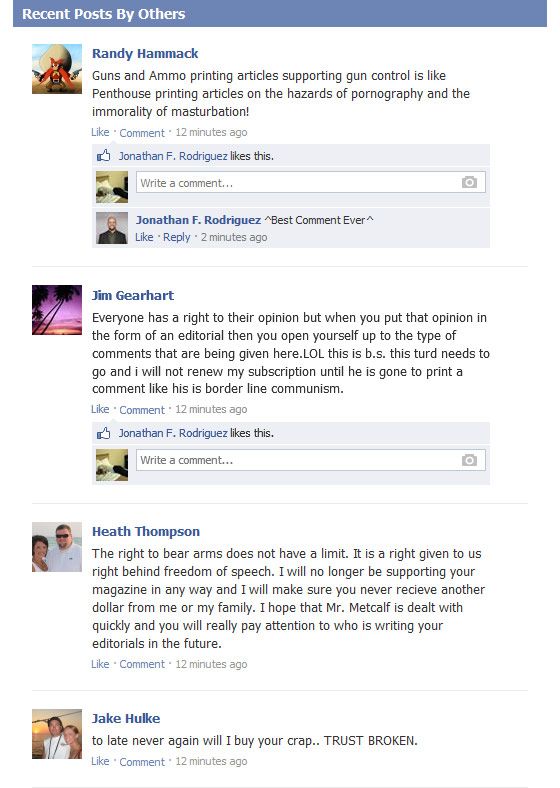 It worked. “Dick Metcalf has had a long and distinguished career as a gunwriter, but his association with Guns & Ammo has officially ended,” writes the magazine’s editor Jim Bequette in “a personal apology” to readers, insisting, “No excuses, no backtracking.”

I made a mistake by publishing the column. I thought it would generate a healthy exchange of ideas on gun rights. I miscalculated, pure and simple. I was wrong, and I ask your forgiveness.

But the groveling apology and sacrifice to the Gun Gods were not enough: The editor also fell on his sword. (Er, gun?) “Plans were already in place for a new editor to take the reins of Guns & Ammo on January 1,” says Bequette. “However, these recent events have convinced me that I should advance that schedule immediately.” It’s time to put the guns and ammo back in Guns & Ammo.

Again, this all stems from one guy saying maybe weapons could be handled more carefully, in case you were wondering about the current state of the gun-control conversation in this country.