Prickly Cablevision, Madison Square Garden, and New York Knicks boss Jim Dolan, who recently said he’d take this year’s last-place team over last year’s playoff squad, is currently opening for the Eagles, whom he loves. While the Knicks have lost their last six games, Dolan’s band, JD & the Straight Shot, have been playing for dozens of classic-rock fans who accidentally got to the show early at arenas across the country. He’s living the dream; Knicks fans are frustrated. As pointed out by the New York Times today, one coping mechanism for the bored and depressed is messing with the Wikipedia entry for Dolan’s group, whose discography has been altered (again!) to reflect the sad reality of this season.

The fake song titles, which still exist as part of the historical record as of this writing, include “Wasting Knicks Fans Time,” “Reunion With Isiah in Hell,” “Dirty Little Secret: Dolan Blows,” “Smile When Dolan Is Dead,” “Fall From Grace As an Average Owner,” and “Slow Motion Turnaround Jumper (feat. JR Smith).” 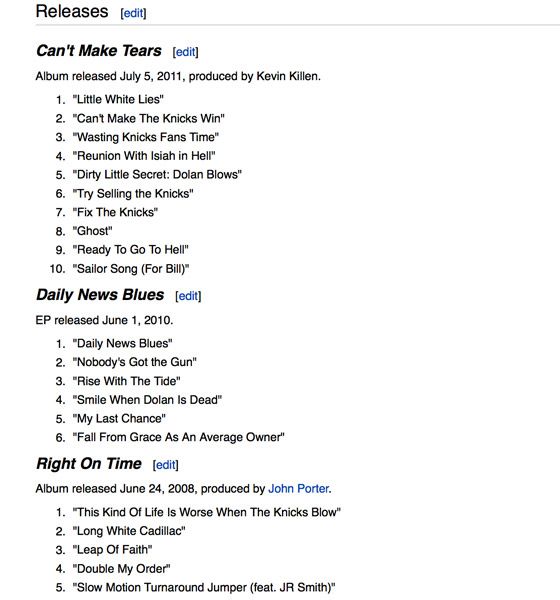 Add to that list: “Whoever Is Supposed to Keep an Eye on Dolan’s Wikipedia Pages Is Fired.”