I am a tactical genius at the foot-ball. Photo: Alex Wong/Getty Images

Today’s New York Times reports, somewhat breathlessly, that Republicans in Congress are carrying out, with military-like precision, a brilliantly conceived strategy to drive opposition to Obamacare. The Times even obtains a copy of the “House Republican Playbook,” complete with an actual football-play diagram on page three. The diagram, meant to instill confidence in the House GOP’s tactical acumen, actually implies that it is run by idiots.

Here is the play: 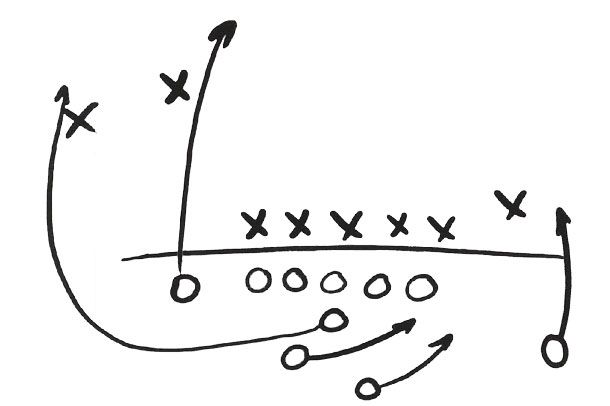 A number of serious problems present themselves.

1. The offense is only fielding ten players. That would be legal, if not smart, as long as seven of them were on the line of scrimmage, as football rules require. But only six are on the line, which would result in an illegal formation penalty.

2. The defense only fields eight players.

3. Compounding the problem, this defense is weirdly misaligned, with five defensive linemen, three defensive backs, and zero linebackers, with one of the defensive backs sitting out in the left flat guarding nobody. Designing a play against a badly aligned defense with three missing players ought to be extremely easy, even if the offense is missing one player itself. A simple run up the middle would have an easy numeric advantage for the offense. Running the flanker on the right side off the field to clear out the one defensive back on that side and leaking a running back to the flat would likewise result in a wide-open receiver.

Instead, the play is a naked bootleg to the left, running straight into the defensive back who isn’t guarding anybody. That is to say, imagining they’ll face an outnumbered and horribly misaligned defense, the offense proposes to attack the only part of the field where the defense has an unblockable defender. This is literally the only play I can imagine that could not work against this defense.