It turns out that the intentionally provocative atheist billboard in Times Square has managed to … provoke someone! Staten Island State Senator Andrew Lanza says he finds the digital billboard — which claims that the “true meaning” of Christmas involves Chinese food and snow, among other things, but has absolutely nothing to do with Jesus Christ — “hateful and malicious,” and went so far as to compare the organization behind it to the Nazis and call for a boycott of, um, all of Times Square:

Religious persecution of the kind that similarly lead to the Holocaust began with small evil baby steps of ridicule and hatred of the religious beliefs of others. …

I would have hoped that the people who own this billboard, those who live in Manhattan and around Times Square and the community’s political leaders would have decried this hate speech as something not to be tolerated or allowed.

I am calling upon all decent people to send a message loud and clear that there is no room in our society for religious hatred or persecution. To send this message, people should boycott and stay away from Times Square and all those affiliated with  hatred of this kind.

Because obviously the best way to forestall Nazi-like behavior is to stamp out minority opinions that dare to dissent from societal orthodoxy and oh god wait a sec.

In response to Lanza’s call for a boycott of Times Square, American Atheists have now placed a billboard on the Goethals Bridge leading into Staten Island from New Jersey. 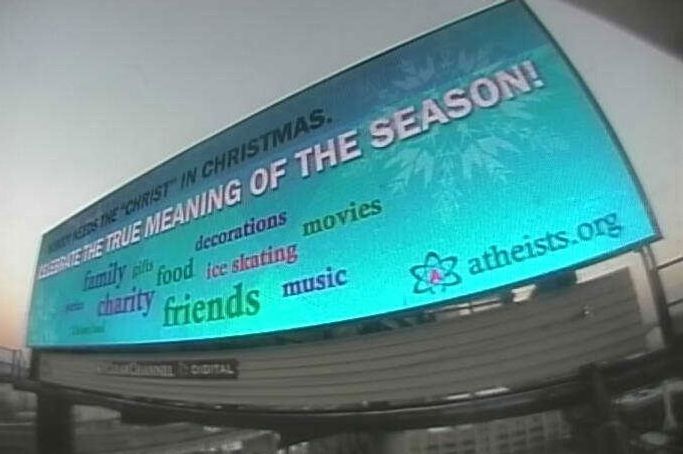 Lanza has yet to call for a boycott of the Goethals Bridge.