The nascent Knicks-Nets intra-city rivalry, infused with off-season trash talk and the Nets’ acquisition of some longtime Boston Celtics, appeared not long ago as if it would reach new levels of intensity this year. Had the Nets put together a championship team? Could the Knicks hold off these uppity Brooklynites and keep their crown as the best team in the city? Fasten. Your. Seat belts.

Unbuckle your seat belts. Five weeks into the season, as the squads are set to face off for the first time tonight at Barclays, the Knicks and Nets are holding down the bottom two spots in their division with a combined record of eight wins and 26 losses. The question no longer is which team is better? but which team is more of a disaster? Let’s break it down.

Performance vs. Expectations:
While the Knicks were supposed to be an above-average team this year, many thought the Nets could be championship contenders. Also, one might reasonably expect that the more money a team spends on acquiring players, the better it should perform. The Nets and Knicks, have the two highest team payrolls in the league, but the Nets have the highest payroll, by $14.5 million.
Advantage: Knicks.

Injury Excuses:
Both teams have been coping with injuries to key players. On the Knicks, former Defensive Player of the Year Tyson Chandler only played four games before breaking his leg. But the Nets have played seven games without their All-Star center, Brook Lopez, and nine games without their All-Star point guard, Deron Williams.
Advantage: Nets.

Coaching Drama:
Amid reports of friction between the two colleagues, Nets coach Jason Kidd (five weeks of NBA coaching experience) has, um, “reassigned” assistant coach Lawrence Frank (seventeen years of NBA coaching experience) to some kind of desk-bound research position. But over at MSG, there’s already rampant speculation that Knicks coach Mike Woodson, who led to the team to an impressive 54-28 record last season, could get canned if the Knicks lose their tenth straight game to the Nets tonight.
Advantage: Nets.

Other Drama:
The Knicks’ starting shooting guard, Iman Shumpert, has been the subject of trade rumors. Shumpert yelled at Carmelo Anthony during a time-out. Metta World Peace and Kenyon Martin got into a heated argument during practice. One report claims that Anthony has already decided not to re-sign with the Knicks after his contract expires at the end of the season. The Knicks have had as many “team meetings” as wins. The Knicks are a complete shit show.
Advantage: Nets.

General Clownishness:
Kidd literally told one of his players to bump into him, spilled his soda on the court on purpose, and used the clean-up delay as a time-out, because he had run out of actual time-outs. The NBA fined him $50,000. This really happened.
Advantage: Knicks. 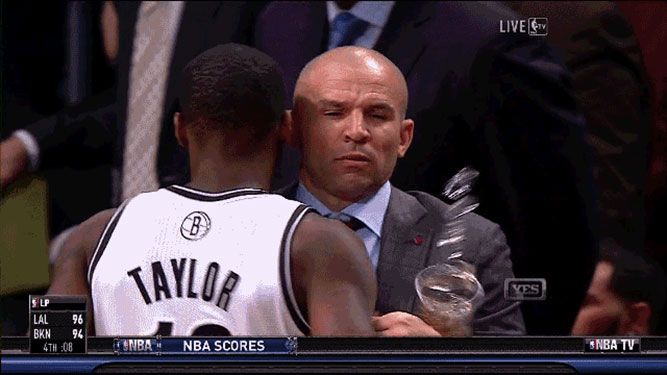 Long-Term Prospects:
If Anthony ditches the Knicks this summer, the team could be screwed for next season. But after jettisoning Amar’e Stoudemire’s huge contract in 2015, the possibilities for the Knicks are endless. The Nets, on the other hand, won’t be able to make any big free agent signings for another three seasons, and traded away many of their first-round draft picks for the next five.
Advantage: Knicks.

In conclusion: It’s the Nets by a hair!