Tim Draper, the third-generation venture capitalist and Silicon Valley money man behind companies like Skype, Hotmail, and Tesla Motors, is no stranger to throwing tons of money behind crazy-sounding ideas. A decade ago, he spent $15 million of his own money trying to pass a school-voucher program in California. When that failed, he launched the Draper University of Heroes, a wacky school for start-up aspirants that I wrote about earlier this year. Now, after leaving DFJ, the venture firm he co-founded, Draper has landed on his newest off-the-wall passion project: a legislative proposal to split California into six pieces, and make Silicon Valley its own state.

TechCrunch got hold of Draper’s plan, which it calls “secessionist.” It’s more of a “partitionist” scheme, really — under Draper’s vision, Silicon Valley wouldn’t drop out of the United States, but it would become its own semi-autonomous region, with its own regulations and governance. It’s a fantasy that Silicon Valley techno-utopians have probably been kicking around in their living rooms for years. But now, Draper is prepared to make it real. 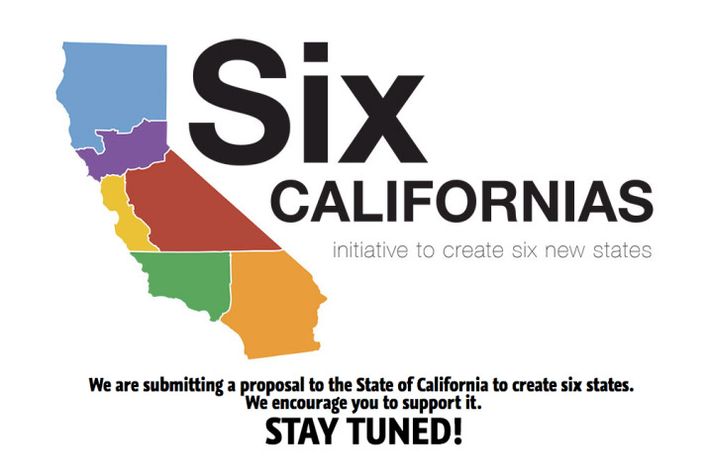 Draper hasn’t yet responded to a request for comment. In an e-mail to TechCrunch, Draper said that his plan would give greater representation to all Californians (“It is about time California was properly represented with Senators in Washington.“) But it’s fairly clear that the proposal is at heart an isolationist manifesto for the tech sector — a slightly more democratic take on Peter Thiel’s call for floating libertarian islands. Draper, and others like him, want Silicon Valley to make its own regulations, to allow companies to experiment with not-yet-legal technologies like commercial drones and self-driving cars, and they want the money that results from those technologies to flow back into the tech economy, not be used to subsidize farmers in Fresno.

Draper’s five-page plan is a little light on details. But among the things it calls for:

It’s worth saying now that Draper’s vision stands very little chance of becoming law. Not only would California voters need to amend the state constitution to usher in the six-state era, but Congress would need to approve it. If it were that easy to turn economic hotbeds into their own states, Silicon Valley (and, for that matter, New York City) would have done it years ago.

But Draper’s proposal is fascinating, insofar as it represents a sort of third-way solution for Silicon Valley technologists who are fed up with the encroachment of government. It’s not exactly dropping out, as people like Peter Thiel and Balaji Srinivasan are calling for. But it’s also not a participatory reform movement, like the one represented by the tech executives who went to meet with President Obama this week.

Instead, it’s a passive-aggressive swipe at the less economically productive regions of California, cloaked in a measure that purports to be good for all citizens of the state. Tim Draper wants the protection afforded by the United States government, without having to submit to the taxes and regulatory slow-footedness coming out of Sacramento. He wants Silicon Valley to be independent enough to play around with drones and genetic engineering, but not so independent that it needs its own military.

It’s an odd proposal, especially since federal, state, and local lawmakers in California are already bending over backward to appease Silicon Valley tech companies. But it shows just how fed up some elements of the tech community are getting with the existing legal and political framework, and how much effort they’re willing to put in to finding an alternative. Tim Draper has already started an alternative school for Silicon Valley aspirants – now, he wants to replace the state itself. It’s a good reminder that when Draper asks his students to face a flag, hold their hands over their hearts, and recite a pledge that begins, “I will promote freedom at all costs,” he’s not just speaking metaphorically.