Politico magazine has a big piece out today about the financial industry’s dissatisfaction with the Obama administration’s cold embrace, and its hopes that a Hillary Clinton administration would “lead us out of the wilderness” and give industry titans better access to cabinet members and high-ranking administration officials. They’re hoping this in spite of the fact that Clinton’s Wall Street ties constitute perhaps her greatest political vulnerability, and might need to be put on the back burner when she actually starts running.

Matt Yglesias is confused by the article’s core theme – that “Wall Street seems to want low taxes and light regulation and bailouts and they want political leaders to thank them for it” – and that Wall Street CEOs expect more influence in Washington than, say, pizza-company CEOs. But the industry’s nostalgia for the Clinton years, and its hopes for another Clinton in office, are actually fairly simple to explain.

Take a look at this chart, via The Atlantic. The blue line shows the financial industry’s share of U.S. corporate profits, and the red line shows manufacturing’s share. For decades, manufacturing absolutely crushed Wall Street. But in the early nineties, amid a huge deregulatory spurt, finance briefly overtook manufacturing, then stayed roughly equal to it until the George W. Bush administration, when it absolutely exploded, becoming a full 40 percent of the nation’s corporate profits. 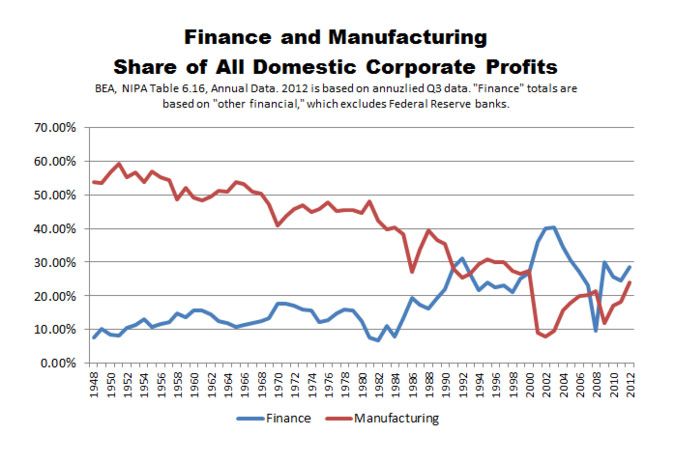 Now, of course, both finance and manufacturing have been taken off their highs – finance by the crisis and the new regulatory regime that followed, and manufacturing by globalization. And their importance in Washington has been diminished as well. If you asked steel executives in Pittsburgh if they miss their round-table discussions with Ronald Reagan, they’d probably share the same laments.

Profits aside, financial executives have always had closer relationships in Washington than other industry chiefs, since they’re big campaign donors who often share social and professional circles with the lawmakers who oversee them. It makes sense that, in the mid-nineties, the top executives of Goldman Sachs could expect to have a direct line to the Treasury Secretary’s office, because the Treasury Secretary was a former Goldman Sachs executive.

Now, things are different. Treasury Secretary Jack Lew is no creature of Wall Street, despite having worked briefly at Citigroup. And the Obama administration has been mostly swept clean of pure financiers in the Rubin mold. So the easy inroads the financial sector used to have are blocked off. (“It’s not that there weren’t any meetings. It’s just that nothing ever happened after the meetings, and people fell out of love,” one senior Wall Street banker told the magazine.)

This is what Wall Street is nostalgic for — an era when their executives could call the president on a whim and expect to be taken seriously, both because their companies represented an outsize portion of the nation’s economy and because they had backslappy relationships with lots of people in the West Wing. Those years happen to have coincided with the Clinton administration, so their nostalgia is Clinton-shaped, but the actual president in power is almost incidental. What they miss is being statistically special, in the scheme of the U.S. economy, and the credibility and access that favorite-son status bought them.

Now, with its profits shrinking, Wall Street is just one more special interest, like pharmaceuticals or oil companies. And that’s not sitting well with the titans of finance. They miss the White House garden parties, the invitations to state dinners, the friendly greetings that awaited them whenever they picked up the phone to dial a 202 number.

I doubt a Hillary Clinton–led White House would restore the financial industry’s access as completely as Wall Street hopes she would. Clinton, after all, is being pushed leftward by the Elizabeth Warren wing of the Democratic Party, and the financial industry is still politically radioactive. (Despite the enthusiasm for Chris Christie among Wall Street elites, there is no Republican administration, Christie’s included, that would have the nerve to put a bank CEO in its cabinet.) But Clinton’s willingness to cash Wall Street’s checks at speaking gigs seems to have opened a door of slim possibility for financiers who want the glory days back. If Clinton could restore even an iota of the industry’s former clout, she’d be a candidate worth rooting for, even if she’s a Democrat.