For something described as “a beautiful space, where everyone walks in and says, ‘wow this place is incredibly gorgeous,’” this 1200-square-foot Nolita loft is taking a pretty chill route, hunting for takers on Craigslist. Especially since — no big deal — it was one graced by the presence of someone who starred in not one, but two projects with rabid fan bases: Lost and Twilight. 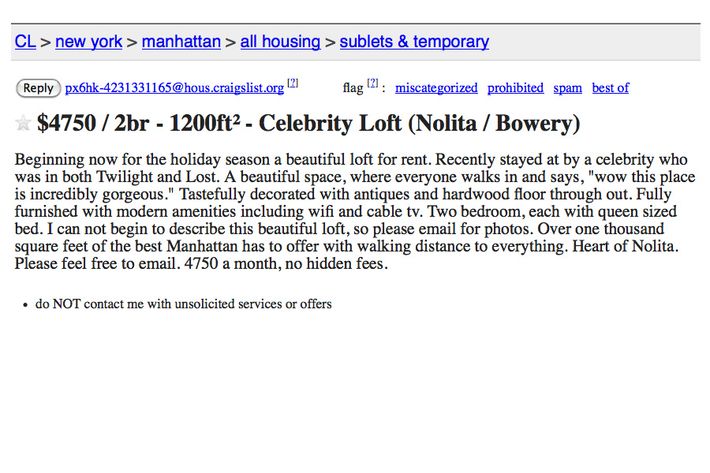 So who is the mystery thespian who turned this regular old loft into a “celebrity loft”? An exhaustive cross-check — we broke out the highlighters, yo — of cast lists for both projects revealed a single crossover name: Maggie Grace, who happened to perform on Broadway earlier this year in the Roundabout Theatre’s Picnic. (In March, she tweeted about the philosophical virtues of having few closets.)

Of course, this could be a classic case of real-estate oversell.  After all, the listing doesn’t specify how long said celebrity “stayed” there. For all we know, Grace (if it is her) may have just crashed on the couch one night.

+Comments Leave a Comment
Who Stayed at This Craigslist ‘Celebrity Loft’?