In case you hadn’t noticed, preparation for this snowstorm was pretty serious. The Long Island Expressway and New York State throughway were closed, flights were canceled, the city deployed about 1,700 snow plows to clear the roads, and Governors Chris Christie and Andrew Cuomo declared states of emergency.

On Friday morning, the metro area woke up to about five inches of snow, enough for new Chancellor Carmen Fariña to close all of the city schools for the day. (Dante’s friends will be pleased.) With Manhattan temperatures near the single digits, wind gusts of 35 mph, and a couple more inches expected, it’s a bit rough out there. And yet, some are truly weathering the storm in style.

Bill de Blasio wore his finest to meet with the snow plow crews:

Thanks to this hardworking team at Brooklyn Garage 6 and all those who are keeping our city safe tonight. pic.twitter.com/Nh3jCbFimw

And started Friday morning off with regular guy duties:

But Chirlane warned yesterday that Dante should wake up ready to work as well:

What Dante will be doing if he does not go to school tomorrow. pic.twitter.com/hizkGImhaD

This guy has some remarkably good dance moves, considering the weather:

There’s no such thing as “not ice cream weather”:

Love that the only person outside in this blizzard is this dude slowly eating his ice cream. #IHeartNewYork pic.twitter.com/6Wky43WgKP 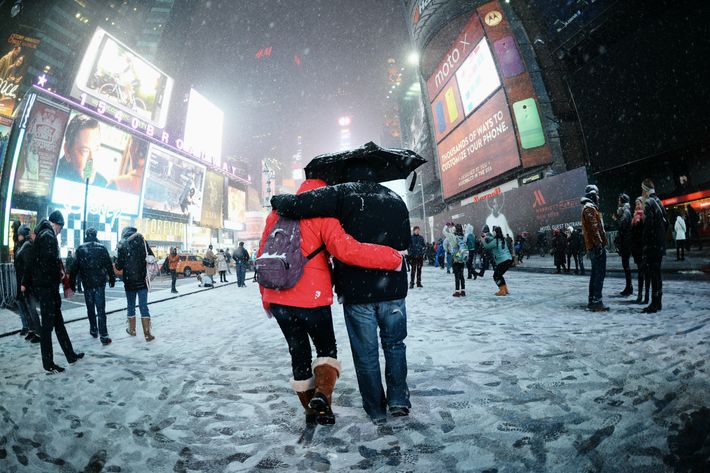 Snow inside the subway is pretty impressive (until commuters have to walk in it).

Trains are running, but the MTA is managing expectations:

"I <3 New York" is stenciled into the snow in Lower Manhattan during Winter Storm #Hercules http://t.co/GoU2YpxJmj pic.twitter.com/fc0lIn41Lj

SoHo unicyclist finds a way to show up snowstorm joggers. 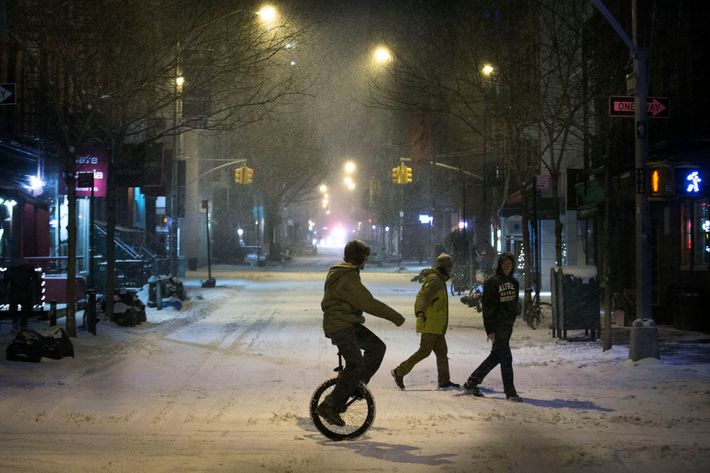 CNN's @brianstelter is LIVE in Islandia, NY with the latest on the snowstorm and its effect on Long Island. pic.twitter.com/9IOhAv9jCH

The Eastern Seaboard wins points just for standing up under this monster. See Florida poking out there?

MAP: It's not just the snow. The "feels like" temperatures are as cold as you think. pic.twitter.com/87B83BCKUs