Former Virginia governor Bob McDonnell and his wife, Maureen, were quite cozy with a local peddler of diet pills, according to a federal indictment that finally came down this week, after a long FBI investigation and much media teasing. The McDonnells are accused of accepting a wide array of gifts — Louis Vuitton, Oscar de la Renta, Rebecca Minkoff, Rolex, Apple, etc. — from the entrepreneur Jonnie Williams, CEO of something very-legit-sounding called Star Scientific, in exchange for soaking up “the prestige of the governorship.” Apparently that’s frowned upon.

In a statement, McDonnell, who left office at the start of this year, said, “I deeply regret accepting legal gifts and loans from Mr. Williams, all of which have been repaid with interest, and I have apologized for my poor judgment for which I take full responsibility. However, I repeat emphatically that I did nothing illegal for Mr. Williams in exchange for what I believed was his personal generosity and friendship.” The couple faces fourteen felony counts, including wire fraud and obtaining property under color of their official office.

The long-developing corruption charges against the once-promising Republican, the Washington Post reports, began with “a tip to a state fraud hotline alleging that the chef at the state’s 200-year old executive mansion was pilfering food from the kitchen”:

When questioned by authorities, the chef quickly offered up information about potentially far more serious wrongdoing in the mansion.

In March 2012, chef Todd Schneider handed over documents that showed Williams paid $15,000 for the catering at the 2011 wedding of McDonnell’s daughter. McDonnell had not disclosed the gift, later saying there was no need because the money was a wedding present to his daughter and state law requires only elected officials, not their family members, to annually disclose gifts.

But the chef also provided evidence that it was McDonnell himself who had signed the catering contract, assuming financial responsibility for the event. A $3,500 refund check from the catering company had gone to McDonnell’s wife Maureen, not Williams or to the young couple.

Maureen continued to clean up, according to the indictment’s forfeiture list, totaling $140,805.46 in largely women’s clothing, although Bob didn’t do so bad himself, thanks to his (allegedly) bold and thoughtful wife: 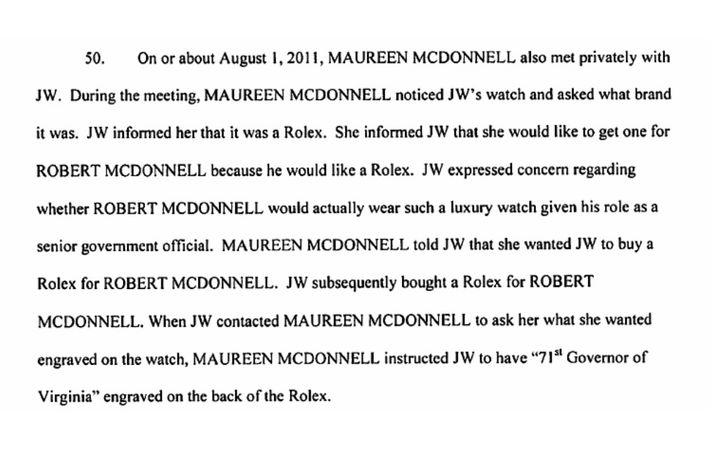 Here’s the full list of goods, to say nothing of the money (supposedly since “repaid with interest”): 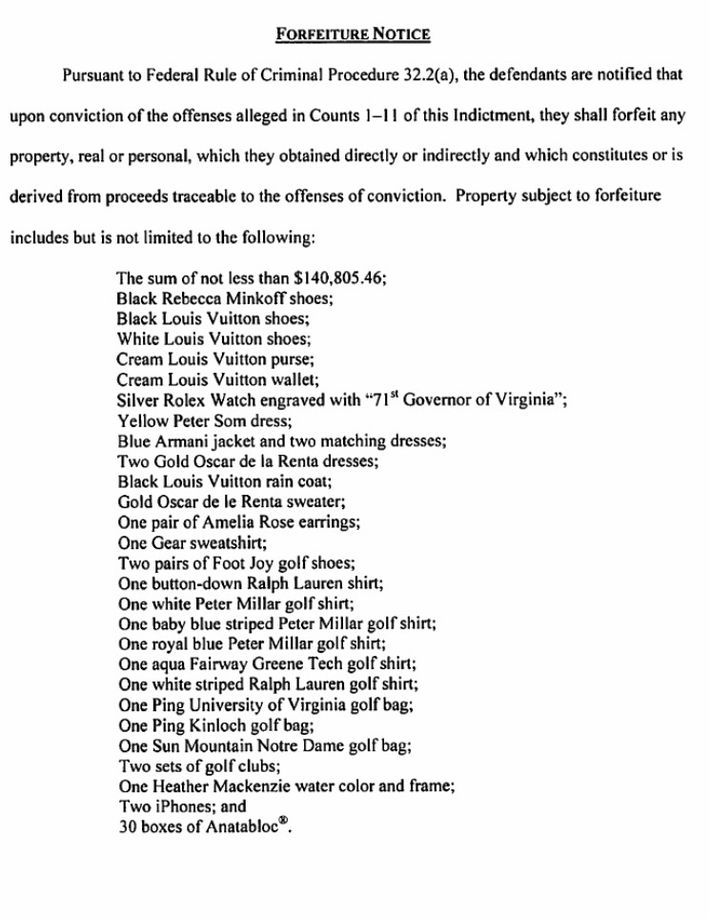