New Jersey Governor Chris Christie will meet the press at 11 a.m. to discuss the blossoming bridge scandal, in which members of his staff arranged, with malice, to shut down lanes of the George Washington Bridge as a political spanking for an enemy. It’s been a rough 24 hours for Christie, who avoided the public yesterday and claimed in a statement that “this completely inappropriate and unsanctioned conduct was made without my knowledge.” Regardless of what he comes up with this morning, Christie and his political future woke up bruised.

Newspapers across the country, but especially in New Jersey and New York, took their shots (although the Post is just disappointing): 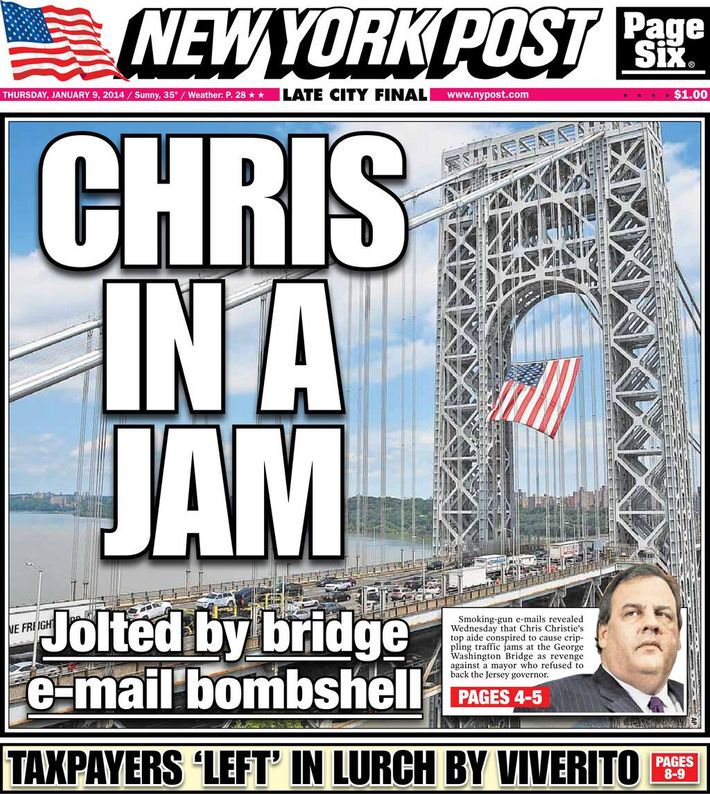 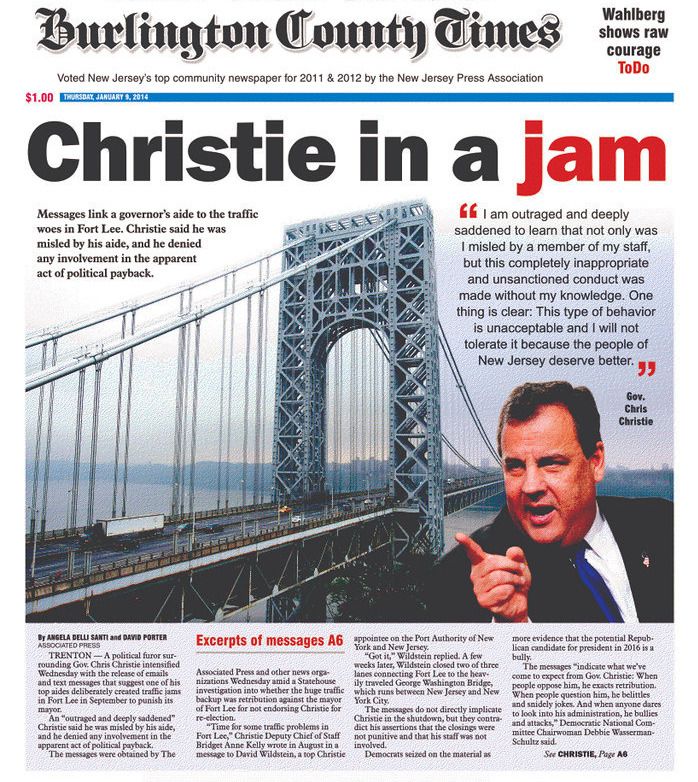 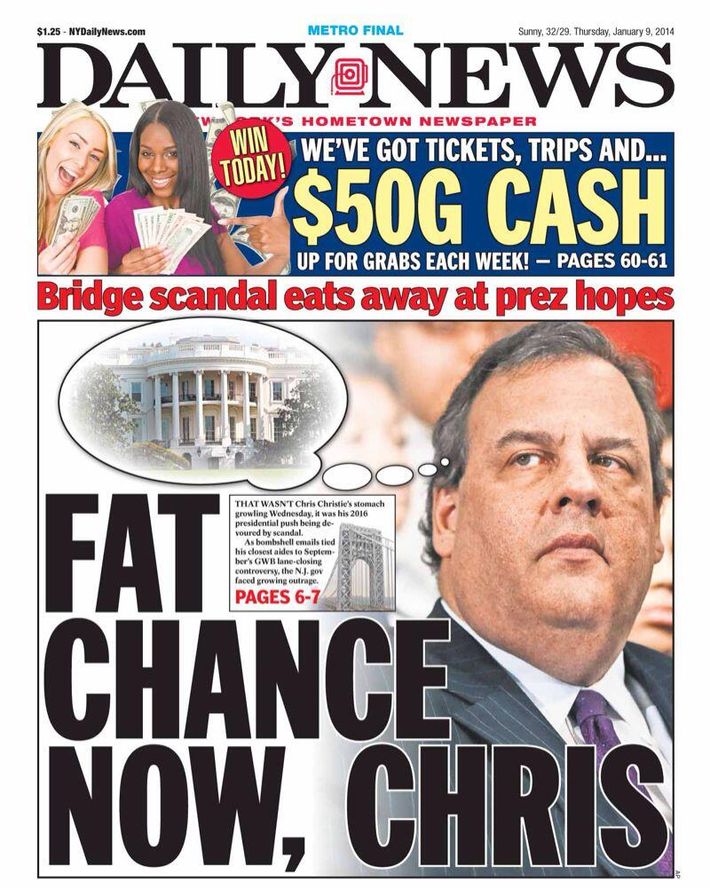 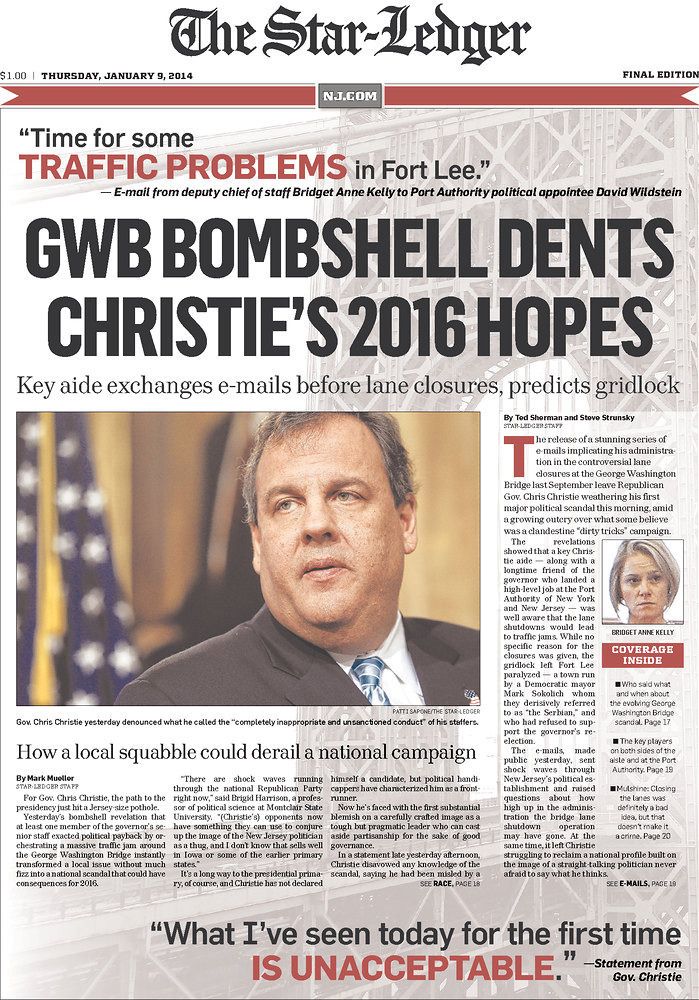 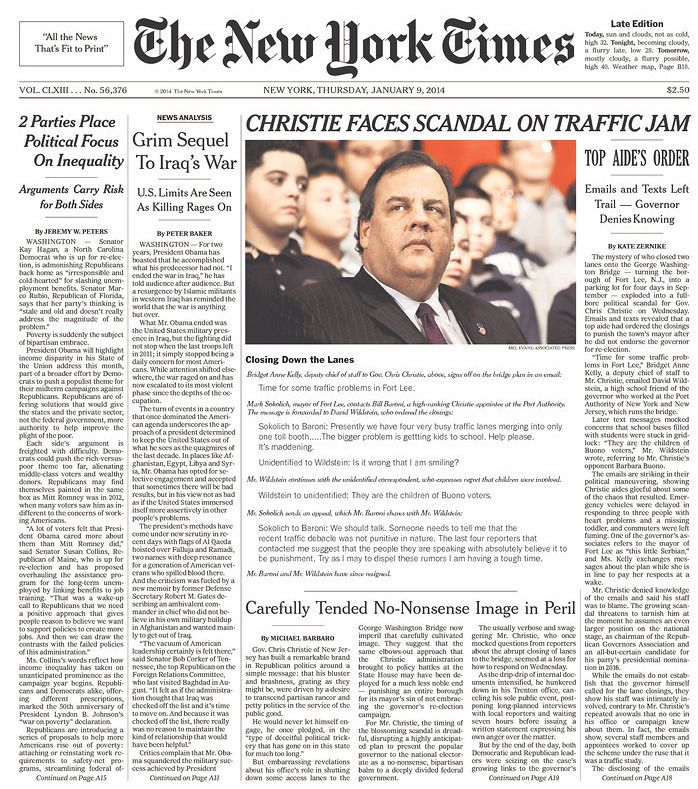 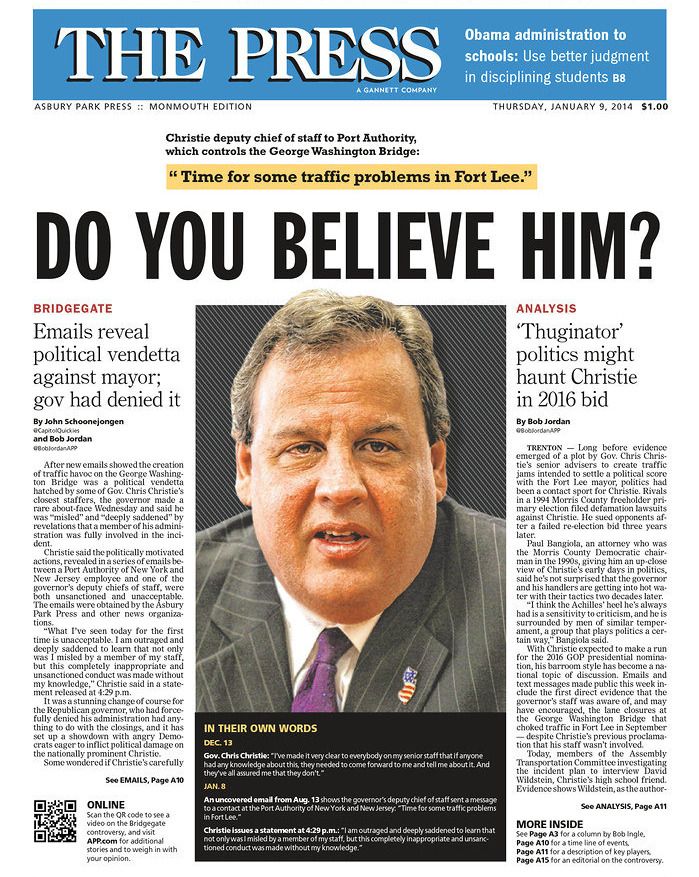 As did The Daily Show, where Jon Stewart said, on the subject of Christie’s damaged 2016 presidential ambitions, “You can probably now see Paul Ryan’s boner from space.”

For Christie, worse than the jokes are the facts — like the one about a 91-year-old woman who died during the coordinated traffic jam, which delayed emergency responders. As Stewart noted, what Christie’s comments on the matter so far lack are any sort of apology. In fact, his previous references to the growing bridge drama, before the damning e-mails, consisted of only outrage and sarcasm, from “I worked the cones, actually … You cannot be serious with that question,” to “I think in the end this will be shown to be speculation by folks who want to play political games.” Today we’ll see if he can admit that he was wrong.

5/27/2022
what we know
what we know
Texas Officials Acknowledge Botched Police Response to School Shooting
By Intelligencer Staff
The local police chief in charge delayed confronting the gunman — while kids trapped inside the classroom repeatedly called 911 asking for help.
5/27/2022
early and often
early and often
Will Trump Ruin Georgia Republicans Out of Spite?
By Ed Kilgore
Trump really dislikes Governor Brian Kemp, who thwarted his primary purge attempt. But Georgia Republicans want a united front against Stacey Abrams.
5/27/2022
the national interest
the national interest
Republicans Block Bill to Monitor Their Violent Allies
By Jonathan Chait
“Domestic extremists — hey, that’s us!”
5/27/2022
just asking questions
just asking questions
A Different Way to Prevent Mass Shootings
By Benjamin Hart
Talking with Mark Follman, whose new book explores how behavioral threat assessment could help a country paralyzed by gun violence.
5/26/2022
early and often
early and often
Is Trump Really a Republican Kingmaker?
By Ed Kilgore
The former president is still touting his highly inflated endorsement record, but his humiliating losses in Georgia tell a different story.
5/26/2022
gun violence
gun violence
There Is a Future for Gun Control
By Kevin T. Dugan
The NRA won after Sandy Hook, but today the gun lobby is in disarray and gun safety is slowly making gains in states.
5/26/2022
the money game
the money game
The Rise and Fall of Wall Street’s Most Controversial Investor
By Jen Wieczner
Cathie Wood built a thriving brand out of price-prediction porn — then the tech bubble popped.
5/25/2022
the national interest
the national interest
The Conservative Playbook for Deflecting Anger After Mass Shootings
By Jonathan Chait
Ignoring the obvious connection between gun deaths and lax gun laws in three easy steps.
5/25/2022
texas school shooting
texas school shooting
Beto O’Rourke Confronts Greg Abbott Over Shooting: ‘This Is on You!’
By Matt Stieb
The Democratic candidate for governor interrupted a press conference about the elementary-school shooting before he was pulled away by security.
5/25/2022
early and often
early and often
2022 Midterms: A Guide to the Races Worth Watching
By Ed Kilgore
A cheat sheet to keep track of all the crucial races, primary upsets, and campaign drama — Trump-fueled and otherwise — from now through Election Day.
5/25/2022
early and often
early and often
The Bush Political Dynasty Ends With a Whimper
By Ed Kilgore
The once-dazzling George P. Bush lost badly to Trump-backed Attorney General Ken Paxton, whom he called a “philandering felon.”
5/25/2022
gun violence
gun violence
Why We Keep Letting This Happen
By Ross Barkan
A non-exhaustive list includes the filibuster, radical red states, the archconservative Supreme Court, and a toxic national tradition.
5/25/2022
early and often
early and often
Trump Dumped Mo Brooks. He Made the Senate Runoff Anyway.
By Ed Kilgore
The January 6 speaker survived Trump’s ludicrous “woke” accusation and will face Katie Britt in next month’s Alabama GOP Senate runoff.
5/25/2022
early and often
early and often
The Devil Went Down to Georgia and Lost
By Ed Kilgore
Trump spent the past two years working to exile Brian Kemp and Brad Raffensperger from the GOP, but he couldn’t do it.
5/25/2022
early and often
early and often
President Mike Pence Would Be Worse Than Trump
By Ross Barkan
The former vice-president is attempting to bolster his chances in 2024, but Democrats would be wise to beware any attempt to rehabilitate his image.
5/25/2022
foreign affairs
foreign affairs
The American Running Rescue Missions in Ukraine
By Rachel Nostrant
Kathy Stickel has pulled dozens of people out of harm’s way by putting herself in it.
5/25/2022
plagued
plagued
Welcome to the Next COVID Wave
By Chas Danner
The new wave fueled by the BA.2.12.1 subvariant might not be as big or bad as the last one, but there are still plenty of ways it can go wrong.
5/24/2022
2022 midterms
2022 midterms
Republicans May Have Sabotaged Their Best Chance to Beat Whitmer
By Matt Stieb
Five GOP candidates for governor in Michigan — including the top two contenders — faked signatures to get their names on the ballot.
5/24/2022
adam neumann
adam neumann
Adam Neumann’s New Business Plan
By Kevin T. Dugan
The former WeWork CEO wants to get rich(er) by helping corporations appear more environmentally sustainable than they really are.
5/24/2022
partygate
partygate
Millionth Boris Johnson Pandemic Party Exposed
By Benjamin Hart
Will this be the one that forces his resignation? Nah, probably not.
5/24/2022
early and often
early and often
Perdue Ends Flailing Campaign With Racist Remarks About Stacey Abrams
By Ed Kilgore
The former senator capped off his Trump-inspired challenge to Governor Brian Kemp by accusing the Democrat of “demeaning her own race.”
5/24/2022
games
games
The Most Disturbing Part of the Yankees’ ‘Jackie’ Incident Was the Fans
By Will Leitch
Yankee Stadium picking up Josh Donaldson’s taunt was another example of crowd dynamics gone haywire.