During the marathon press conference yesterday on his massive bridge scandal, New Jersey Governor Chris Christie said he just didn’t understand why his staff would create a traffic jam to target a small-time political rival: “The other part of this that just shocks me,” he said, is that Fort Lee’s Mayor Sokolich “was never on my radar screen.” The obscure Democrat’s endorsement in an election Christie was going to win handily no matter what never really mattered. “So part of this is I never saw this as political retribution because I didn’t think he did anything to us,” he said.

But on her show last night, Rachel Maddow presented an alternate theory: What if the bridge play never had anything to do with Sokolich? Instead, she posited, maybe the intended target was another Fort Lee politician with whom Christie definitely had beef. Meet Senate Majority Leader Loretta Weinberg.

As Maddow laid out, Weinberg, who also represents Fort Lee, was at the center of an ongoing battle over state Supreme Court appointees. The day before the now-infamous “time for some traffic problems in Fort Lee” e-mail from Christie’s deputy chief of staff, the governor had called the Senate Democrats “animals.” And it wasn’t the first time he made his displeasure with Weinberg known.

Way back in 2011, Christie slammed the then-76-year-old Weinberg for collecting both a pension and a paycheck: “I mean, can you guys please take the bat out on her for once?” he said to reporters. “The hypocrisy meter has got to tilt on her.” Weinberg, unlike Sokolich, was definitely on his radar. In response to the Maddow segment, Weinberg (who did not immediately respond to a request for comment) posted the clip to her Facebook page: 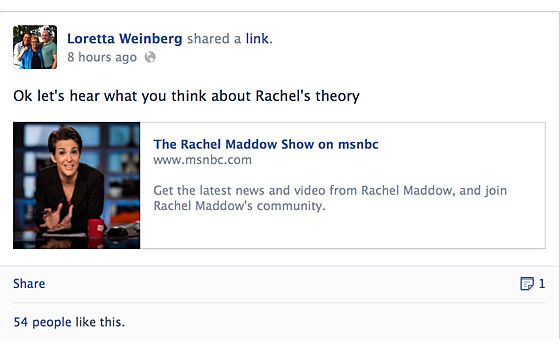 Meanwhile, it was the press who first prompted the Fort Lee mayor to wonder if he was the target of the traffic jam: “We should talk,” he wrote to a Port Authority official on September 17, according to e-mails and texts released this week. “Someone needs to tell me that the recent traffic debacle was not punitive in nature. The last four reporters that contacted me suggest that the people they are speaking with absolutely believe it to be punishment. Try as I may to dispel these rumors I am having a tough time.”

On November 7, The Wall Street Journal story that broke the scandal open made a similar suggestion: “People familiar with the matter and some local officials … believe it was a gesture aimed at the borough’s Democratic mayor, who had declined to cross party lines to endorse Mr. Christie for governor two weeks earlier.”

But as Christie said yesterday, “I don’t have any recollection of at any time, anybody in the campaign ever asking me to meet with Mayor Sokolich or call him, which was the typical course that was used when we were attempting to get an endorsement.” If Maddow’s version of events has any credence, that may very well be true. In which case, Christie may need to make a whole new set of denials.