It’s a mayoral rite of passage — not just the first snowstorm, but dressing for it. Like watching a ball game in a T-shirt or doing a shot with the union guys in blue jeans, braving the elements during a weather event is the perfect photo op for a politician hoping to telegraph an aura and an attitude. Bill de Blasio cruised into City Hall as the anti-Bloomberg Brooklynite everyman, and he’s hoping not to lose that cred now that he’s in office.

Last night’s snow — not quite enough of a blizzard to paralyze the city — was the perfect opportunity for some posturing: Beforehand, De Blasio toured the bureaucratic behind-the-scenes (all business), and in the morning, he hit the sidewalk outside his home to shovel snow (down-to-earth). As with his predecessors and contemporaries, the outfits said it all.

In an attempt to prove he was taking preparations seriously, De Blasio wore his signature suit while doing a nice job of “feigning interest” with some snowplows. (It wasn’t his first picture next to a plow: Earlier on Thursday, before sunrise, the mayor stepped out in his favorite Brooklyn hoodie to make some serious-looking calls.)

Thanks to this hardworking team at Brooklyn Garage 6 and all those who are keeping our city safe tonight. pic.twitter.com/Nh3jCbFimw

Avoiding a repeat of Mayor Bloomberg’s missing-in-action Bermuda getaway during the 2010 blizzard was obviously first priority, even though De Blasio has neither a tropical vacation house nor the jet to get there. On Friday morning, as seen up top, De Blasio went back to the regular-guy look to shovel some snow: jeans and a black jacket — nothing flashy, just simple and classy. 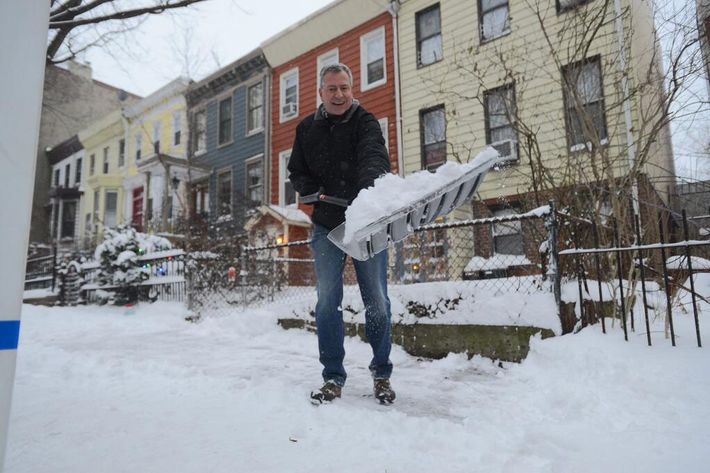 And at an official press conference this afternoon, he looked active and practical in a “Mayor’s Office” blue windbreaker and what can only be described as dad jeans: 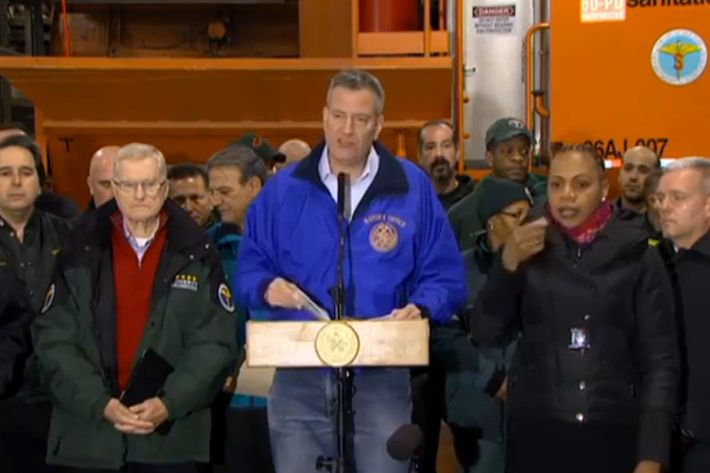 Asked about his selections, the day-three mayor offered sassily to show off his layers:

In all, De Blasio’s carefully studied clothes played directly against his foil, Bloomberg, who favored colorful rich-guy sweaters and staying inside. “I do remember as a kid hoping for lots of snow,” said Bloomberg during his first storm in charge. “Now as the mayor, I don’t.”

(We were unable to find a photo of Michael Bloomberg shoveling snow.)

While De Blasio stuck to his own sidewalk, he did seem to take a page from the similarly telegenic, next-generation progressive Cory Booker, former mayor of Newark, who seems to be addicted to shoveling snow (and the photos that come with it). Note the serious face of a veteran shoveler:

Rudy Giuliani too modeled with a shovel during the snowstorm of 1996, rocking the FDNY hat because of course. In 2000, he switched it up with a Department of Sanitation hat. Call it Staten Island chic:

New Jersey Governor Chris Christie, known for his hurricane fleece, is all about staying warm in a bold purple sweater and bonus scarf, a continuation of his trademark Don’t Be Stupid school of thought:

New Yorkers whining over five inches have nothing on Chicago, where Rahm Emanuel has also been known to pick up a goddamn shovel, here adding a colorful beanie to the otherwise classic look: 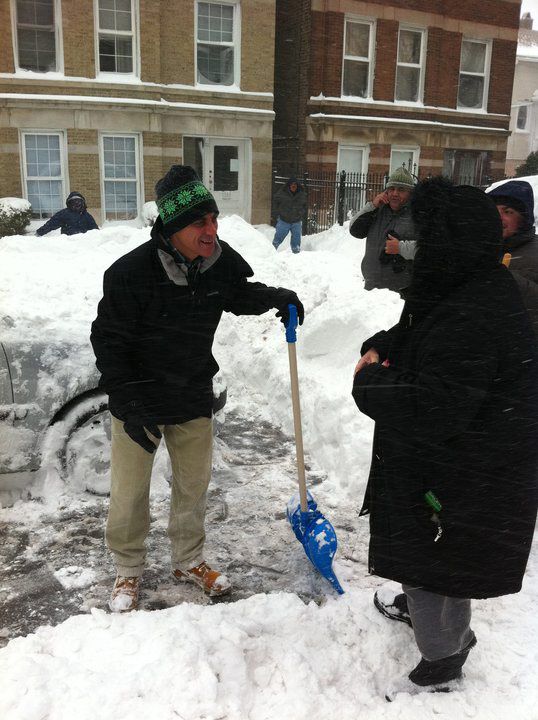 But the real experts on winter weather are to our north, in Toronto. Rob Ford, rocking the turtleneck in front of a plow, knows his way around some snow:

THE FEED
11:20 a.m.
tremendous content
tremendous content
All the Juicy Gossip From Jared Kushner’s Book
By Margaret Hartmann
Breaking History, the forthcoming memoir from the former First Son-in-Law/top Trump adviser, is brimming with dirt, jabs, and score settling.
10:05 a.m.
2022 midterms
2022 midterms
Liz Cheney and the Demise of Anti-Trump Republicanism
By Ed Kilgore
Until recently, the Wyoming representative was a rising GOP star and heir to the party’s conservative conquerers. Then she ran afoul of Trump.
9:00 a.m.
games
games
The “Real” Home-Run Record Is 73, Not 61
By Will Leitch
Aaron Judge’s tremendous season has rekindled a tiresome argument about the purity of the game.