Last night, Douglas Kamerow and I debated Megan McArdle and Scott Gottlieb at Intelligence Squared over the notion, “Obamacare is now beyond rescue.” Intelligence Squared picked the topic two months ago, when the website was still broken, insurers were frantic, congressional Democrats were in a full-scale panic, and it seemed genuinely possible to many people that the law would simply fail.

The arguments McArdle and Gottlieb made last night bore little resemblance to the sorts of failure predictions that were widely circulating last November. Many of their arguments simply took issue with the law’s goals; they argued that Medicaid does not make people healthier, that healthy people ought to be able to enjoy the financial benefits of being skimmed out of the insurance pool, and that politicians will reverse all the mechanisms needed to finance the law. In other words, they argued that the law was doomed for the reasons opponents had argued it was doomed in 2010, or for reasons a conservative could offer to suggest Medicare and Social Security are also doomed.

In the frantic autumn days, conservatives were offering a gorier prognosis — a rapid death, not an extended, ideologically preordained demise. The botched website rollout forced insurers and allies of the law to cancel their outreach campaign, leaving the new exchanges filled only with the customers most desperate to obtain insurance. In a caveat-laden yet still breathless report, Republican adviser Yuval Levin wrote that insurers were furious and contemplating “unthinkable options”: “At this point, it looks as though we may be witnessing a failure of the administrative state on a level unimagined even by its staunchest critics.” McArdle was writing columns with headlines like “Is Obamacare in a Death Spiral?” and “Why Obamacare Is Like Three Mile Island.”

Today, the website is working (though still not flawlessly). News stories recently emphasized that the exchanges have attracted disproportionately older customers to date, but that is expected. The website failure in October and November compressed the rollout time, and the age composition of the exchanges is following the same pattern as Massachusetts — older people enrolling first, and then the proportion of younger customers steadily rising. 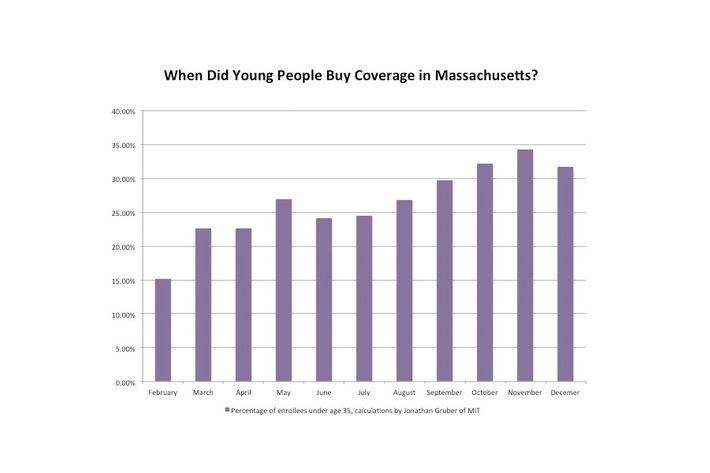 The enrollment surge from December is continuing. Sarah Kliff reports that once-panicky insurers are now expressing satisfaction with the customers they’re enrolling.

And even if none of the optimistic projections are borne out — even if, unlike Massachusetts, the age distribution of the exchanges freezes into place — a death spiral still will not occur. The Kaiser Family Foundation crunched the numbers and found that even this worst-case scenario would result in a 2.4 percent premium hike. That’s a trivial increase, nothing like the kind of premium hike that would chase healthy customers away and trigger a death spiral. The website botch may mean that the exchanges enroll fewer customers for 2014 than originally hoped. But the effect on the long-term prognosis of the law turns out to be essentially nil.

With the grand threats of a massive technical failure and an actuarial death spiral dispatched, what remains? In the feverish autumn panic, Democrats in Congress appeared ready to stampede away from Obamacare. The Hill panic peaked out with the Upton bill, a Republican proposal that would have genuinely impaired the functioning of the law, and which attracted nowhere near enough support to override an Obama veto. The failure of the Upton bill marked the end of any nascent legislative threat to Obamacare while Obama still holds office.

Meanwhile, a newer legislative challenge has lurked on the sidelines. Conservative legal activists had seized on a quirk in the legislative text of the law which, if taken out of context, could be read to deny tax credits to any customers in the exchanges run by the federal government rather than the states. Yesterday, a judge laughed this challenge out of court.

The point I tried to make in last night’s debate — with limited success, at least as judged by the voting audience — was that Obamacare opponents had merely fallen back on their original, ideologically driven opposition to the law. To call their opposition ideologically driven is not to say it is wrong. It is merely to say that they philosophically oppose the goal of national health insurance. They have persuaded themselves the law can’t accomplish its goals, when their real fear is that it will.

My favorite moment from the debate, and I’m obviously biased, occurred when McArdle denied that she philosophically opposes national health insurance, prompting me to quote the headline of this 2009 McArdle column, “Why I Oppose National Health Care.”

There will be no glorious triumph of Obamacare, no cinematic score playing in the background, and no concession of defeat by the law’s opponents. That’s not how politics and public policy work. In my opening remarks, I compared Obamacare’s progress to renovating a house. It’s a frustrating process with fits and starts, disappointments, and constant frustrations. Obamacare opponents have tried to paint the frustrations as a collapse in progress — every time an electrician fails to show up or a part is unavailable or a design plan has to be reijiggered, they use it as proof that the whole thing is going to collapse. But it was never going to collapse, because renovating a house, like having a national health-care system, is something that is fundamentally doable. Obamacare opponents are going to have to let go of their hopes that the law cannot work and face up to their honest belief that they don’t want it to.

THE FEED
2:43 p.m.
royals
royals
Australia Banishes King Charles From Its Banknotes
By Margaret Hartmann
In the battle to succeed his mother on Australian $5 bills, Charles loses to the First Australians.
1:42 p.m.
early and often
early and often
The Hunter Biden Counteroffensive Begins
By Matt Stieb
Tired of being a GOP punching bag, he threatened Fox News with a defamation suit and encouraged the DOJ to investigate how his laptop became public.
12:39 p.m.
the national interest
the national interest
The GOP Attack on Ilhan Omar Trivializes Antisemitism
By Jonathan Chait
Elevating Marjorie Taylor Greene exposes the hypocrisy.

11:47 a.m.
religion
religion
Badass Pope Briefly Endorses Giving People the Finger
By Benjamin Hart
A weird Thursday-morning tweet from the pontiff.
11:17 a.m.
crime
crime
New Jersey Councilwoman Shot and Killed Outside Her Home
By Nia Prater
Eunice Dwumfour, a 30-year-old member of the Sayreville Borough Council, was found shot dead on Wednesday night.
10:57 a.m.
early and often
early and often
The Latest Hunter Biden Revelation Is a New Low
By Matt Stieb
Texts reportedly show he withheld an employee’s pay for sex.
10:32 a.m.
the talented mr. santos
the talented mr. santos
Here’s Every Single Lie Told by George Santos
By Matt Stieb
Navigating the many exaggerations and falsehoods of New York’s newest representative.
10:02 a.m.
creature capers
creature capers
The Hunt Is on to Find the Dallas Zoo Bandit
By Matt Stieb
Police are looking for whoever is responsible in a strange crime wave in which animals have been killed and apparently stolen from the zoo.
9:10 a.m.
what we know
what we know
New FBI Search of Biden’s Home Finds No Classified Documents
By Margaret Hartmann
The search of Biden’s Rehoboth, Delaware beach house was planned and consensual, like the searches of his office and Wilmington residence.
8:00 a.m.
early and often
early and often
The GOP Can’t Remember Why It Took the Debt Ceiling Hostage
By Eric Levitz
Republicans are fighting Biden for the sake of fighting.
2/1/2023
politics
politics
Eric Adams’s Approval Rating Is Falling
By Nia Prater
Crime is the top issue for New Yorkers, and very few say it’s gotten better under his watch.
2/1/2023
early and often
early and often
Nikki Haley Is Taking on Trump 2024 (or Running for VP)
By Ed Kilgore
The South Carolinian is expected to announce her run later this month, but Trump has already staked a claim on her crucial home state.
2/1/2023
tremendous content
tremendous content
Watch Trump Repeatedly Plead the Fifth, Like a Mobster
By Margaret Hartmann
New deposition video shows Trump, who once said only criminals and “the mob” take the Fifth, asserting his constitutional right more than 400 times.
2/1/2023
politics
politics
There’s Another Push to Change New York’s Bail Reforms
By Nia Prater
Governor Kathy Hochul reaffirmed her intent to give judges more discretion in setting bail during her budget presentation Wednesday.
2/1/2023
let it snow
let it snow
Our Long Local Snowmare Is Over
By Benjamin Hart
New York City finally saw some flakes stick to the ground on Wednesday morning. Better late than never.
2/1/2023
the big picture
the big picture
The End of ‘Zombie Neoliberalism’?
By Eric Levitz
There is burgeoning, bipartisan support for big government.
2/1/2023
the national interest
the national interest
It’s Republicans Who Won’t Negotiate Over the Budget Deficit
By Jonathan Chait
The other big lie in this hostage crisis is hiding in plain sight.
2/1/2023
the system
the system
The Government’s Telling Response to Tyre Nichols’s Death
By Zak Cheney-Rice
The reforms being considered would probably not have prevented his killing. But officials have gotten better at preempting outrage.
1/31/2023
life after roe
life after roe
RNC Tells Republican Politicians to Stay Extreme on Abortion
By Ed Kilgore
The RNC passed a resolution scolding politicians who backed off after the end of Roe v. Wade and urging them to stay on the offensive in 2024.
1/31/2023
tyre nichols
tyre nichols
Eric Adams Defends Specialized Police Units Following Tyre Nichols Case
By Nia Prater
The New York mayor said that, while he did not want to second-guess the decision to disband Memphis’s SCORPION unit, “units don’t create abuse.”
1/31/2023
the money game
the money game
Jerome Powell’s Crazy Balancing Act
By Kyla Scanlon
The Fed chairman faces a big decision with the world watching. No one said his job would be easy.
1/31/2023
the national interest
the national interest
Why DeSantis Is on Track to Beat Trump
By Jonathan Chait
The main Trump alternative has learned the lessons of 2016.
1/31/2023
what we know
what we know
A Seventh Officer Has Been Suspended After Tyre Nichols’s Death: Updates
By Intelligencer Staff
The officer was relieved of duty the same day the five officers charged with murder were fired for the beating.
1/31/2023
games
games
The Lost Joy of Hating Sports Announcers
By Will Leitch
Self-righteous jerks like Billy Packer don’t exist on TV anymore, and that’s a shame.
1/31/2023
lost in translation
lost in translation
The Spy Who Wasn’t
By Paula Aceves
Baimadajie Angwang wanted a visa for his daughter. He got charged with being an “insider threat” instead.