The lead story on Sunday’s 60 Minutes — a journalistic franchise that has had a run of dicey “big” stories lately, including its now-withdrawn Benghazi report — was an exclusive interview with Tony Bosch, the unlicensed doctor who claims to have been baseball superstar Alex Rodriguez’s steroid dealer. Major League Baseball’s suspension of Rodriguez, upheld over the weekend, rests almost exclusively on the testimony of Bosch, and Rodriguez’s legal team has spent much of last year hammering away at his credibility and character. 60 Minutes offered Bosch and Major League Baseball a chance to air their own broadsides against Rodriguez.

Bosch didn’t go easy on his former client. He said that he supplied banned substances to the superstar as part of a program to improve his strength and performance, that he injected Rodriguez himself, and that he carefully calibrated the doses and timing to avoid detection.

Correspondant Scott Pelley acknowledged that Bosch is a flaky character whose credibility has to be carefully considered: “To us he seemed like a troubled guy — heavy smoker, heavy drinker.”  Pelley also pointed out that he’s changed his story.

Still, the arbitrator hearing Rodriguez’s challenge to his 211-game ban found Bosch credible. His decision, made public Monday, is a sweeping denunciation of the Yankees superstar. It finds that he took banned substances for years, and also that he attempted to obstruct MLB’s investigation.

But Bosch and Rob Manfred, MLB’s chief operating officer, used their 60 Minutes appearances to expand the charges. In their telling, Rodriguez wasn’t just a steroid user. Both Bosch and Manfred, the person who in effect “turned” Bosch, accused Rodriguez of a series of potential felonies, including an attempt to bribe Bosch. To them, he was essentially a gangster.

60 Minutes seemed to accept at face value the most explosive charges against Rodriguez — and, except for giving Rodriguez’s attorney a say, left them largely unchallenged. Some digging, though, demonstrates that there is reason to be skeptical of Bosch’s and MLB’s most dramatic claims.

Among them was Manfred’s assertion that Rodriguez tried to bribe Bosch by wiring money to Bosch’s criminal attorney, Susy Ribero-Ayala. 60 Minutes showed a paper with the wired sum: $49,901.51. It was a bizarrely precise figure for an unsolicited bribe, but Manfred claimed it convinced him that Rodriguez had tried to buy Bosch’s testimony.

“I do,” responded Manfred.

In fact, documents obtained by New York suggests that the wire transfer was a legal payment made in error. Rodriguez’s attorney Roy Black sent Rodriguez a bill for that same amount on April 2, 2013 – six days before the payment to Ribero-Ayala. According to e-mails examined by New York, Rodriguez’s business staff confused the wiring information and accidentally sent the payment to Ribero-Ayala on April 8.

Rodriguez’s employees had Ribero-Ayala’s name in their payment system because Rodriguez  had previously paid her $25,000 to help cover Bosch’s mounting legal fees, when the two were still telling the same story — and Bosch had thanked him for that.

On April 9, 2013, Rodriguez realized that the second payment was in error, according to the e-mail chain, and Ribero-Ayala returned the money, which was then transferred to Black’s law firm’s account.

Here’s the bill (with a few redactions):

The billed sum is identical to the alleged bribe payment shown on 60 Minutes (screenshot on top):

In its segment, 60 Minutes didn’t provide Rodriguez’s side of the story. And Manfred made the claim on-air even though Rodriguez’s lawyers had supplied Black’s bill, along with the e-mails, to Major League Baseball.

Alex Rodriguez may well have taken banned substances as charged. Arbitrator Frederic Horowitz pointed out that Rodriguez never denied the charge under oath, and on the contrary had invoked his Fifth Amendment rights when asked directly by MLB in an early interview. (Horowitz nonetheless reduced his ban from 211 games to 162.)

Still, after the 60 Minutes broadcast, the charges that Rodriguez used banned substances are mixed with, and perhaps overshadowed by, the unsupported claims that one of the greatest baseball players in history is, in effect, a thug capable of anything. (Bosch and Manfred also tossed around a claim that Rodriguez participated in a threat to kill his accuser.)

Rodriguez has lately tried to portray himself as a crusader against a bullying organization willing to do anything to get its man. Some fans believe that. Unsupported claims by MLB and by Bosch give them little reason to change their minds.

Update: MLB spokesman pat Courtney said: “We continue to believe that this payment, and the $25,000 payment that Rodriguez made to Bosch’s attorney, was an attempt to silence Bosch.” 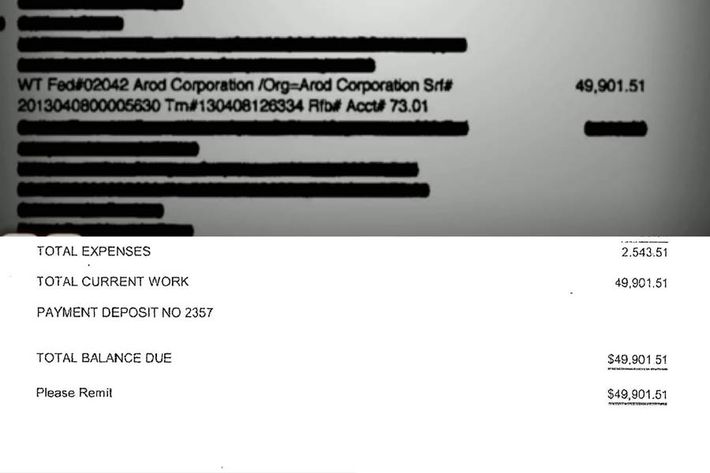