When George W. Bush left office in January of 2009, the Republican Party was firmly in the grips of a quasi-theological belief in the power of low tax rates for the rich. In the face of a collapsing health-care system, rising global temperatures, an engorged financial system, and rising inequality, it produced an agenda that either ignored these problems or aggravated them. Some pundits hopefully posited that the twin shocks of the economic crisis and the 2008 election might prod the GOP back to reality. It seemed, at the very least, that the party’s economic policy apparatus could not possibly get any worse.

It got worse. Much worse.

The post-2008 GOP kept the basic structure of Bush-era plutocracy on taxes and regulation but abandoned its grasp of Keynesian counter-cyclical economics (which Bush employed in 2001 and 2008), its embryonic acceptance of climate science (John McCain ran on cap and trade in 2008), and its gestures of compassion. In their place came an Ayn Rand–tinged frenzy, imagining a future of spiraling debt and hordes of takers lay immediately ahead. Even as sober and moderate a figure as Mitt Romney had genuinely succumbed to the enveloping fever. In the new documentary showing behind-the-scenes footage of his campaign, Romney is seen brushing off advice that in the wake of defeat he soothe his supporters:

“I believe we’re following the same path of every other great nation, which is we’re following greater government, tax rich people, promise more stuff to everybody, borrow until you go over a cliff. And I think we have a very high risk of reaching the tipping point sometime in the next five years.”

In the year since Romney’s defeat, the party’s descent into madness has halted, and may even be slowly reversing. This is an encouraging development, given the reality that the Republicans can’t be kept out of total power forever. (Given their map-based hammerlock on the House of Representatives and the red-state tilt of the Senate, it would not take much for them to regain the full control of government they enjoyed before 2007.) If this does come to pass, what will the new, saner (or less insane) Republican Party look like? And how will this come to pass?

President Obama expressed the hope that, if reelected, “the fever would break.” In the way he cared about most directly, this has not happened. Republicans still refuse to come to terms with a health-care law they once favored, refuse to compromise on the long-term budget on even highly favorable terms, refuse modest short-term ideas to support infrastructure or otherwise spur employment, ideas their own allies favor. The logic of total opposition hasn’t changed: Republicans still face a risk of fratricidal attacks if they cooperate with Obama on anything, and gridlock and high unemployment still help Republicans by driving down Obama’s approval ratings.

Yet Republicans have clearly responded to the sting of Obama’s reelection — and, in particular, his success at using economic populism against them. They haven’t abandoned any of the central tenets of their party philosophy, which remains anchored in the conviction that the central problem in American life is a government that takes too much from the rich and gives too much to the non-rich. They have, however, cast around for policies to augment their platform for 2016, or to dilute its plutocratic character.

The New York Times’ Ross Douthat lists a few in his most recent column: Senator Mike Lee endorsing family-friendly tax reform and more lenient sentencing, and Marco Rubio endorsing more generous tax credits for low-income workers without children. (One could add Chris Christie, who used his inaugural address to endorse a rethinking of the war on drugs.) Douthat is, as always, buoyant about the impending triumph of his conservative reform movement. Douthat always sees promise for conservative moderation lurking just over the horizon. In his column now, he favorably contrasts Lee and Rubio with the austerity of Paul Ryan and Romney (“about whose substance the less said the better”). Of course, when Ryan and Romney were the party vanguard, he fiercely defended Ryan and Romney as vehicles for conservative reform. Douthat is always more reliable at evaluating the last Republican idea than the current one. Yet just because he always sees the day of conservative reform close at hand does not make him always wrong.

The weakness of these plans is that, because they add on to the existing party agenda rather than try to replace it, they don’t fully make sense. For instance, Rubio claims his tax credit plan is deficit neutral, which means his proposal to redirect more tax credits to low-income workers without children would have to come out of the pockets of low income workers with children. Or else he’d have to break his vow and add to the deficit. Lee’s tax reform likewise has no real numbers, for the same reason: The math does not work.

This dilemma binds all the Republican plans to boost economic mobility. The Ryan budget, which is the essential statement of Republican party doctrine, imposes staggering cuts on subsidies for the poor and sick. It is not possible to credibly pose as a champion of social mobility without jettisoning it absolutely.

There’s an obvious way for Republicans to escape this dilemma: They can stop caring about budget deficits. That is what happened the last time Republicans held the presidency, under George W. Bush. During the nineties, like now, the Republicans sat in opposition to a Democratic president whom they accused of wild fiscal profligacy, and centered their platform around austerity. Bush campaigned for president by distancing himself from their proposals to “balance the budget on the backs of the poor.” On whose backs would Bush balance the budget? Well, nobody’s. Bush financed his entire agenda — tax cuts, a defense buildup, Medicare part D, energy subsidies — through debt.

At this moment, it may be hard to imagine Republicans abandoning their demands for austerity after having waxed hysterical over the debt for five years. But the budget deficit has, with little fanfare, diminished sharply. The long-term, upward-swooping arc of rising debt against which Paul Ryan warned in movie trailer panic tones? It’s been reduced to a gentle slope: 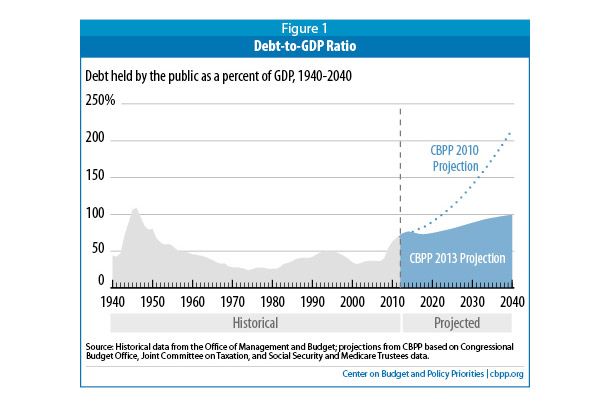 By 2017, the immediate deficit may be completely gone, or certainly low enough to be forgotten.

Swinging from utter complacency about deficits to bug-eyed fear as they move in and out of the White House is a natural transition for both parties, but especially so for Republicans. Dick Cheney easily went from insisting, “Reagan proved that deficits don’t matter” during his own administration to warning of a “debt crisis” under Obama’s. (Democrats have swung less sharply – note how Nancy Pelosi supported budget stimulus under Bush in 2001 and 2008, and agreed to back a deficit-cutting deal negotiated by Obama and John Boehner in 2011.)

If and when Republicans regain the White House, profligacy holds the key to their ideological salvation. Liberating themselves from austerity will allow them to back away from their brutal campaign of confiscating food stamps, Pell grants, and low-income tax credits, and still hand out tax cuts for the 1 percent. Tax cuts for one and all! That, after all, was the Bush formula: small elements of programmatic reform for low-income workers, stapled onto the agenda of The Wall Street Journal editorial page, all costs deferred.

A Republican Party that reprises the Bush era was a grim and unfathomable prospect in 2008, and is not exactly palatable now. But in the wake of the party’s thrall to Ayn Rand and Rand Paul and Paul Ryan, a return to Bushism sounds almost comforting.

THE FEED
7:00 a.m.
covid-19
covid-19
What We’re Not Telling the Public When They Get the Vaccine
By Jeremy Faust
The time to prevent rumors is when people’s sleeves are rolled up.
1/20/2021
inauguration liveblog
inauguration liveblog
Biden Reverses Trump Orders From Oval Office: Live Updates
By Intelligencer Staff
Kamala Harris swears in history-making senators as the nation turns the page from Trump.
1/20/2021
president biden
president biden
What Did President Biden’s Day-One Executive Orders Achieve?
By Charlotte Klein
The U.S. is now back in the Paris climate accords, border-wall construction has been halted, and there is a mask mandate on federal grounds.

-Rejoin Paris accord
-Fortify DACA
-Undo Muslim ban
-Stop border wall
-Order unified Covid response
-Eviction/foreclosure freeze —> 3/31
-Extend student loan pause —> 9/30
-Rescind Trump’s 1776 commish
-Undo Trump EO on Census
—@sahilkapur
1/20/2021
inauguration
inauguration
Watch President Trump Leave the White House for the Last Time
By Benjamin Hart
“Have a good life, we’ll see you soon.”
1/20/2021
coronavirus
coronavirus
I Work in a Restaurant. When Will I Get Vaccinated?
By Jaime Wilson
Am I “essential,” or not?
All
1/20/2021
games
games
7 Ways Trump Changed Sports Forever
By Will Leitch
He left a permanent imprint — and not entirely in a bad way.