George Will hates climate science, and everything that springs from climate science, including any non-carbon-intensive mode of transportation, like fuel-efficient cars, or, heaven forbid, trains. Will’s column today celebrates his belief that Americans are once again disproving President Obama’s Big Government Social Engineering by flocking to ever-larger and less-fuel-efficient vehicles:

Have consumers thanked him for trying to wean them from their desire to drive large, useful, comfortable, safe vehicles that he thinks threaten their habitat, Earth? The 2013 numbers tell the tale of their ingratitude. In 2013, for the 32nd consecutive year, the best-selling vehicle was Ford’s F-Series pickups. This supremacy began, fittingly, in the first year of Ronald Reagan’s deregulatory presidency.

It is nice, in these dark socialist times, that Will can still detect the flicker of freedom in the hearts of Americans flocking toward Reaganite Freedomcars. And it is true that the Ford F-Series is the single best-selling vehicle in the U.S. But the single best-selling vehicle by itself accounts for less than 5 percent of all vehicles sold. The single most popular item on a long list does not, by itself, tell you what all customers want. (To explain this concept in terms Will might understand: If the Yankees have the biggest television audience of any baseball team, it would not prove that most baseball fans love the Yankees.)

So, are Americans on the whole flocking toward gas-guzzling vehicles? No, just the opposite (via Brad Plumer): 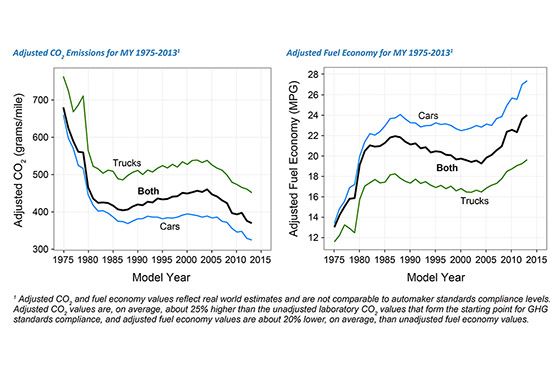 Americans are also driving less in general. Will can rest assured that, even though Americans do not share his weird mania for emitting greenhouse gasses to spite Barack Obama, they aren’t cutting back for political reasons, either. The steady increase in fuel efficiency has occurred largely because the government has raised fuel-efficiency standards.

Even if Will didn’t have his facts backward, the larger point is that his analysis of transportation choices as a cultural struggle is bizarre and wrong. Will considers climate science a gigantic hoax, and obviously nothing is going to change his mind. Yet he takes his mania a step further by failing to understand that Democrats actually do believe in climate science, and are not merely pretending to believe it as a pretext to enlarge their nefarious control of the populace.

+Comments Leave a Comment
George Will Keeps Getting Nuttier

THE FEED
21 mins ago
what we know
what we know
Trump’s Mar-a-Lago Raided by FBI: Everything We’ve Learned
By Intelligencer Staff
DOJ reportedly got a tip that Trump was still holding classified documents, and they were “so sensitive” that officials felt they had to act.
1:09 p.m.
what we know
what we know
An Armed Man Attacked the FBI’s Office in Cincinnati
By Intelligencer Staff
This is a developing story.
1:05 p.m.
life after roe
life after roe
The Anti-Abortion Movement’s Divisions Suddenly Have Huge Consequences
By Ed Kilgore
Fights over rape-incest exceptions and when exactly life begins are in danger of undermining already low popular support for abortion bans.

9:00 a.m.
what is elon musk?
what is elon musk?
‘I Don’t Talk to Any of My Normal Friends About This’
By Alex Yablon
Two members of Elon Musk’s Twitter army explain their decision to enlist.
8:00 a.m.
what is elon musk?
what is elon musk?
‘I Began Just Losing Money Every Day’
By Jen Wieczner
Four short sellers on the specific agonies of betting against Elon Musk.
8/10/2022
life after roe
life after roe
Abortion-Rights Fight Finally Gives Kamala Harris a Chance to Lead
By Ed Kilgore
After being assigned several no-win tasks, the veep is emerging as the White House’s biggest champion on the crucial issue of reproductive rights.
8/10/2022
just asking questions
just asking questions
‘You Can’t Play the Cable-News Game in Court’
By Benjamin Hart
National security lawyer Bradley P. Moss on the seriousness of Trump’s predicament and the unseriousness of his lawyers.
8/10/2022
early and often
early and often
Trump Scores More Primary Wins While Basking in GOP Support
By Ed Kilgore
The ex-president got more post-raid consolation with wins by his candidates in Connecticut and Wisconsin, plus the loss of another impeachment backer.
8/10/2022
early and often
early and often
2022 Midterms: A Guide to the Races Worth Watching
By Ed Kilgore
A cheat sheet to keep track of all the crucial races, primary upsets, and campaign drama — Trump-fueled and otherwise — from now through Election Day.
8/10/2022
early and often
early and often
Trump, Who Once Said ‘the Mob Takes the Fifth,’ Takes the Fifth
By Margaret Hartmann
The former president says he has finally learned about the value of the Fifth Amendment after repeatedly mocking people who invoke it.
8/10/2022
early and often
early and often
The Heir to Bernie?
By Ross Barkan
The career of America’s leading socialist has to end at some point, and he might have a worthy successor in Vermont’s own Becca Balint.
8/10/2022
the money game
the money game
Pretty Soon You’ll Be Able to Afford Things Again
By Kevin T. Dugan
July’s inflation rate saw an unexpectedly large drop, driven by the price of gas. This could be the beginning of the end of the era of high prices.
8/10/2022
the city politic
the city politic
Dan Goldman on the Problem With Trump, Republicans, and Members of His Own Party
By Nia Prater
The veteran federal prosecutor tries politics.
8/10/2022
what is elon musk?
what is elon musk?
SpaceXCadets
By Sarah Jones
If you want your child to become the next billionaire industrialist, Astra Nova might be a good place to start.
8/10/2022
what is elon musk?
what is elon musk?
Musk As Muse
By Fran Hoepfner
Elon’s romantic partners keep putting him into their art.
8/9/2022
2022 midterms
2022 midterms
Senate Control Could Come Down to a Georgia Runoff Once Again
By Ed Kilgore
If neither Raphael Warnock nor Herschel Walker wins a majority in November, which looks plausible, they’ll face off in a December runoff.
8/9/2022
crime
crime
Police Arrest Suspect in Killings of Muslim Men in Albuquerque
By Benjamin Hart and Nia Prater
At least three Muslim immigrants have been ambushed and killed in recent weeks, terrifying the local community.
8/9/2022
exhibit a
exhibit a
Making Sense of the Trump Raid
By Ankush Khardori
After a summer of intense criticism, Merrick Garland’s Justice Department takes its boldest step yet in pursuit of the former president.
8/9/2022
the power trip
the power trip
What’s in Trump’s Safe the FBI Raided?
By Olivia Nuzzi
Former aides consider the contents of the vault at Mar-a-Lago.
8/9/2022
mar-a-lago raid
mar-a-lago raid
Convicted Felons Are Leaping to Trump’s Defense
By Matt Stieb
Fellow politicians and operatives who also had run-ins with the Feds are claiming him as one of their own.
8/9/2022
the national interest
the national interest
What Is Really Unprecedented Is Trump’s Criminality
By Jonathan Chait
Republicans are angry at the FBI, but they choose to yoke themselves to a flagrant crook.
8/9/2022
early and often
early and often
Republicans Go to the Mattresses to Defend Trump From the Feds
By Ed Kilgore
The gestures of loyalty to Trump and fury at law enforcement by leading Republicans with no idea of the raid’s purpose or findings are revealing.
8/9/2022
goat
goat
Serena Williams Announces Her Retirement From Tennis
By Claire Lampen
In a Vogue essay, she says she plans to step away from the sport after the U.S. Open wraps next month.
8/9/2022
the city politic
the city politic
Yuh-Line Niou on Her Especially Personal Run for Congress
By Nia Prater
From representation to disability policy, she says there’s a common theme: Courage.
8/9/2022
games
games
The Mets Are Having an Extremely Un-Mets Season
By Will Leitch
They’re overachieving their way to the playoffs — and having a great time doing it.