No offense, but you’re crazy and dangerous and nobody likes you. Photo: Mark Wilson/2013 Getty Images

If John Boehner’s support for immigration reform is a kind of Prague Spring for the mainstream of the elected Republican Party, the equivalent among conservative intelligentsia can be found in the latest issue of National Affairs, which launches a double-barreled assault on conservative dogma. The first is an essay by Bush administration veterans Michael Gerson and Peter Wehner, setting the philosophical and historical precedent for a non-dogmatic Republican domestic agenda. The second is a manifesto by the American Enterprise Institute’s Michael Strain laying out a Republican agenda to aid the jobless.

The two pieces represent an important moment in the conservative reform movement, displaying a heretofore rare confidence of the party’s movement to frontally attack their own party’s shibboleths. They also display the dodges and compromises that make conservative reform both so infuriating and so useless in breaking the fever that has gripped the party throughout the Obama era.

In his book Do Not Ask What Good We Do, Robert Draper reported that leading Republicans met the night of President Obama’s inauguration and decided that their path to regaining power lay in opposing every bill that Obama put forward. The political strategy formulated by Washington Republicans was quickly subsumed within a larger flowering of reactionary ideology, flowing from tea-party devotees to highbrow conservative pundits and back: Barack Obama was undermining the basic fabric of the Constitution, threatening an imminent Greek-style collapse and choking out liberty itself.

Gerson and Wehner assail the historical and philosophical underpinnings of this whole line of thought. The Founders, they point out, were not proto-libertarians — the staunch ideological opponents of a flexible national government were actually the opponents of the Constitution. The Founders “would have little toleration for politicians who are committed to abstract theories even when they are at odds with the given world and the welfare of the polity.” They proceed to assail dogmatic opposition to any position for the state, arguing for a government role in furthering “the common good,” “equality of opportunity,” and even “ensure broad access to modern health care.”

Gerson and Wehner confine themselves to broad strokes, but Strain’s companion piece supplies plenty of details. Strain takes a machete to every nostrum of post-recessionary conservative thought: that the Federal Reserve must prioritize low inflation over faster growth; that short-term deficits must be slashed rather than increased; and that the best solution to high unemployment lies in implementing the same low-tax, low-regulation policies that conservatives favor all the time.

The common thread of both pieces is a call for a Republican Party that designs its platform as a response to observed real-world conditions, rather than waging an eternal war against the size of government regardless of any real-world effect. In the modern political context, this is a revolutionary manifesto. For five years, Republicans have defined their agenda as lower taxes and lower spending, disregarding any appeal to solve non-ideological problems, like unemployment or lack of access to health care. In the world imagined by Gerson, Wehner, and Strain, Republicans and Democrats might not care about the same list of problems, and they wouldn’t propose identical solutions. Republicans would still want a lower and more regressive tax code, more private provision of social goods, and so on. But compromise would become imaginable. President Obama would disagree with parts of Strain’s jobs agenda, but he would sign it into law in a heartbeat.

Yet, even while they demolish the philosophy and history undergirding tea-party Republicanism, they leave its political strategy intact. Conservative reformers have a persistent tic of signaling their partisan bona fides to suspicious Republicans by exaggerating their indictment of the Democrats. Wehner and Gerson assert, for instance, “The Obama years have set a high-water mark for the size and reach of the federal government, including a post-World War II record for federal spending as a percentage of gross domestic product at 25.2%.”

Well, yes. Spending surged to 25.2 percent of GDP for one year, when the economic crisis drove up the numerator (by automatically increasing the number of Americans eligible for public assistance) and drove down the denominator. Since then, government spending has quickly receded to levels lower than the Reagan era: 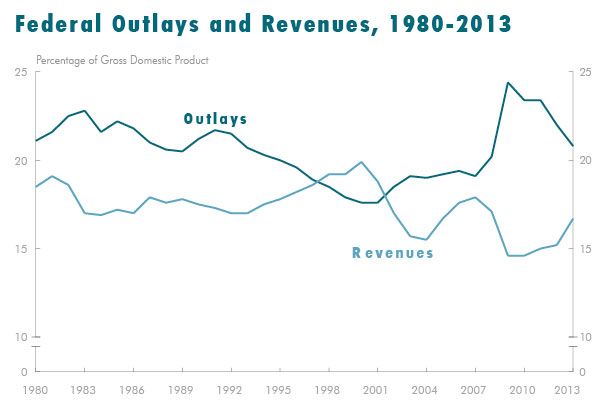 Perhaps deeming this measure inefficient, Gerson and Wehner proceed to argue that his campaign’s “Life of Julia” graphic, rather than some mid-level campaign staffer’s slightly clumsy attempt to demonstrate the practical benefits of several Obama initiatives, is actually the Rosetta Stone of Obama’s left-wing grandiosity.

It’s perfectly understandable that the Republican reformers don’t endorse Obama’s program. That’s why they’re Republican reformers, not converted Democrats. What’s more slippery is the selective parameters of their case. When they describe their idealized policies, they compare them favorably to actually existing Republican policies, or to actually existing Democratic policies. Both essays present this new GOP agenda as a sensible middle ground between Obama’s liberalism run amok and tea-party extremism.

What they refuse to do is compare actually existing Obama policies to actually existing Republican policies. The reason for their refusal is obvious: It would force them to forfeit their claim to partisan loyalty by defending the Democratic agenda. After all, if they consider broad access to medical care a worthy goal, isn’t Obamacare — while perhaps suboptimal — better than nothing (which is the plan Republicans have repeatedly voted for)? If they favor fiscal stimulus to reduce unemployment, even if they quibble with the particular design of the American Recovery and Reinvestment Act, isn’t it a radical improvement over the Republican program of fiscal anti-stimulus?

At this very moment, the Republican Party does not lack for an agenda toward the jobless, the poor, and the sick. It has an agenda: Republicans are denying Medicaid to 5 million poor Americans in states they control, proposing $40 billion in cuts to food stamps, and cutting off unemployment benefits to workers who can’t find jobs. Obama can’t pass innovative new plans to help the unfortunate because he is fighting Republican proposals to punish them.

Obama’s goal from the outset of his presidency has been to identify Republicans who are able to define their goals in pragmatic terms, split them off from the far right, and negotiate compromises with them. This method requires, among other things, a moderate Republican wing that is able not only to define differences with the far right but to repudiate and break from the party’s total opposition strategy.

As an exercise in long-term intra-party positioning, the reformers’ caution may be correct. Perhaps they need to mete out their heterodoxy with caution, so they can remain comfortably enough within their party tent and gain the ear of the next Republican presidential nominee. But in the meantime, they’re giving up any chance to stop their party from doing a great deal of harm.