Mawwiage… mawwiage is what brings us together today. Photo: Twentieth Century Fox

In his speech on poverty last week, Marco Rubio held up marriage as the primary cure for that which afflicts the poor. “The truth is, the greatest tool to lift children and families from poverty is one that decreases the probability of child poverty by 82%,” said Rubio. “But it isn’t a government spending program. It’s called marriage.” To be sure, Rubio is not married to marriage as the greatest tool of upward mobility – later in the speech, he asserted, “We have the single greatest engine of upward mobility in human history at our disposal: the American free enterprise system.” (If you have a problem with there being two greatest tools in human history for lifting people out of poverty, you’re probably not a Rubio voter in the first place.)

Still, even though Rubio is two-timing marriage with the free market, he does seem to love it as much as the free market, which seems to be a real sign of its progression into a first-tier conservative value. A second and more barometrically accurate sign of the same is a Wall Street Journal op-ed by former Bush press secretary Ari Fleischer, headlined, “How to Fight Income Inequality: Get Married,” sanctifying the role of marriage as official Republican party-line response to poverty and inequality.

The conservative analysis of marriage is not ridiculous. Marriage may in fact be the single issue where the conservative analysis has the most power. The rapid growth of divorce and unwed motherhood has produced a huge increase in the proportion of American children being raised by a single parent, a vast social experiment with measurably harmful effects on children.

Twenty years ago, Dan Quayle castigated the CBS sitcom Murphy Brown for glamorizing single motherhood, and was widely derided by liberals. But all the premises of Quayle’s jeremiad were largely correct and have been borne out: Single motherhood has risen and its effects have been harmful. What’s more, I argued in a 2012 essay, Hollywood really does promote social liberalism, and the promotion really does change the mind of its audience. A new paper finds that the popular MTV show 16 and Pregnant reduced teen pregnancy – this provides an example of Hollywood promoting traditional values rather than its usual liberal values, but serves to reinforce the power of popular culture to change minds.

Yet the question hovering over the conservative defense of marriage is, so what? If the roots of the decline in marriage lie in a cultural sea change, what role does public policy have in reversing it, save for speeches hectoring Murphy Brown and her descendants? Liberals have a policy agenda that tries to accommodate the decline of marriage. Policies like expanded family leave, child care, and pre-kindergarten education would make it easier for single parents to work while ensuring their children receive decent care.

Conservatives oppose those policies because they involve more government and accept the decline of the two-parent household. What they have in place is … very little.

Rubio at least gestures in the direction of a pro-marriage policy by proposing to change the Earned Income Tax Credit. The credit subsidized low-income workers of modest means; Rubio would make it more generous for low-income married couples, and more stingy for single parents. It’s questionable whether Rubio’s policy would actually do much to encourage marriage, and it’s certain it would have enormously noxious side effects, by impoverishing single parents and their children. But at least there is a policy with a plausible working theory behind it: The government will make it easier to be a married parent, and harder to be a single parent, thus, hopefully, incentivizing the former over the latter.

That is more than can be said about Fleischer’s op-ed, which embraces marriage for no reason other than as a cudgel against any policy to reduce inequality. In his op-ed, Fleischer rattles off a series of facts showing that marriage contributes to well-being: “Children who grow up in a home with married parents have an easier time becoming educated, wealthy and successful … One of the differences between the haves and the have-nots is that the haves tend to marry and give birth, in that order … Marriage inequality is a substantial reason why income inequality exists.”

Note the careful phrases in those passages: easier, one of the differences, a substantial reason. That is true. Having two parents is a factor in the well-being of children. One can debate the degree to which the absence of marriage results from a lack of economic opportunities versus the degree to which it causes them. Liberals emphasize one interpretation, conservatives the other.

But even if we assume the correlation runs entirely in the direction asserted by conservatives, there is no way to read the data and conclude that marriage amounts to the entire economic gap, or anywhere close. To take one example, an adult mother is more than twice as likely to be poor if she grew up poor but with two parents than if she grew up non-poor with a single parent: 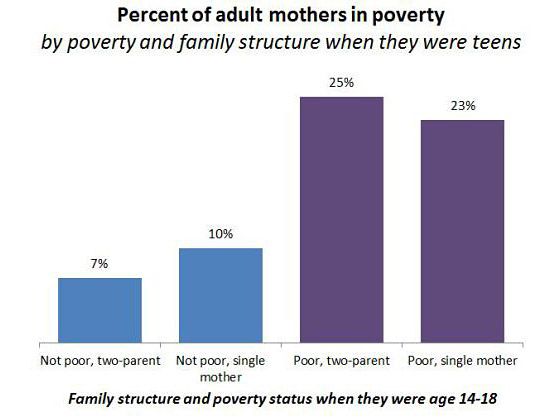 Yet, after citing the contribution of marriage to economic inequality, Fleischer executes an incredible, and incredibly revealing, pivot:

Rather than focusing on initiatives that might address this issue, President Obama, as well as Massachusetts Sen. Elizabeth Warren and New York City’s new mayor, Bill de Blasio, believe that the income gap can be closed by increasing taxes on the better-off and transferring the money to the poor.

Here is the point at which Fleischer has ceased to merely extoll the benefits of marriage and begun using marriage as a reason to oppose any economic transfer to help the poor. Three things stand out in this remarkable sentence. First, of course the income gap can be reduced by increasing taxes on the better-off and transferring the money to the poor. The United States transfers less money from the rich to the poor through taxes and spending than nearly any other advanced country. Fleischer, of course, doesn’t want to transfer more, but it can certainly be done.

Second, he presents the choice between promoting marriage and reducing income inequality as incompatible. We should not reduce economic inequality because we must promote marriage!

Third, and most amazing, Fleischer castigates Democrats for failing to promote “initiatives that might address” marriage, but he fails to mention what such initiatives might be. His column does not contain a single marriage-promoting policy. He does not even bother to go through the pretense of urging somebody to think about the issue and come up with a solution. I can’t quote Fleischer not providing a solution because you can’t quote something nonexistent, but please do read the entire thing. There’s nothing. The entire role of marriage in Fleischer’s argument is as an exercise in “Hey, look over there!” And this, surely, is the spirit in which Republicans can most enthusiastically take up the new fascination with marriage and inequality.

+Comments Leave a Comment
Marriage Is the Republican Answer to Inequality