In his State of the Union address tomorrow night, President Obama will announce that some of the largest firms in the United States have signed a pledge not to discriminate in hiring against the long-term unemployed, reports The Wall Street Journal. This is an interesting and creative response to the most vexing repercussion of the economic crisis: millions of workers who have lost their jobs and cannot find work precisely because they have don’t have it.

The crisis of mass unemployment can be thought of as two problems, one of which is normal, and the other of which is not. The normal problem is simply a standard, albeit very large, recession. The basic policy response is for the government to stimulate demand through low interest rates and fiscal stimulus to create more jobs. Since congressional Republicans (and deficit scolds) are imposing contractionary fiscal policy, Obama has no viable fiscal solution.

There is, however, a second and more unusual aspect to the economic crisis. Even the jobs that are appearing are unavailable to the long-term unemployed. A series of studies have found that employers simply won’t consider candidates who have been out of work for six months or more. One widely circulated experiment found that being out of work for a long time is more harmful to one’s job prospects than even a lack of relevant experience. 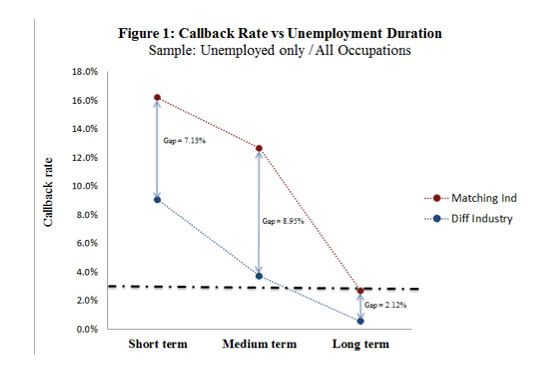 Is this rational? Do job skills become useless after six months? Probably not. Employers are simply using long-term unemployment as a heuristic, to weed out what they see as the weakest candidates. But this shortcut traps the unemployed in a cycle they cannot escape: The longer they’re unemployed, the progressively harder it becomes to acquire a job.

What Obama is trying to do in the State of the Union speech is to create a new kind of social norm in hiring. He’s arguing that employers should not let themselves use this kind of shortcut, and that more careful consideration can actually open up a wider pool of available talent. The administration has boiled down its recommendations to a series of best practices to avoid this form of discrimination. For instance:

This isn’t going to revolutionize the job market. And it’s not as good as getting Congress to pass, say, a new infrastructure bill. But discrimination against the long-term unemployed is a kind of cultural problem in and of itself. And precisely, because it is a cultural problem, it’s the sort of thing a high-profile speech combined with concerted jawboning with corporate leaders has a hope of actually changing.