Maybe getting up and into work this morning was miserable — it’s a mess, everywhere, thanks to this polar vortex thing — but consider tempering your whining, because these people had a really terrible night: Some 500 people on three Amtrak trains were stuck overnight in Who Knows Where, Illinois, owing to the weather. According to the AP, the trains got stuck around 3 p.m. local time on Monday, and were not rescued until this morning, around 6 a.m. Needless to say, it was miserable.

“The conditions is cold, we’re wearing coats,” one woman onboard told ABC. “And my husband is a diabetic. He hasn’t had any food all day.” Oh, and: “The bathrooms are flooded. The sinks are full with water and the toilets are flooded.”

(In Amtrak’s telling, “We do have some folks that are sheltering in place out there on the train. They are being well taken care of. There are supplies, there’s food, there’s power on the train.” So, yeah, NBD.)

It was almost 8 a.m. in Chicago before the first busload of saved passengers reached Union Station. In this instance, complaining on Twitter was not only acceptable, but necessary:

Stuck on a train in BFE for the last 2 hours because of a 12 foot snow drift. Lovely. Also our rescue train just got stuck. #nothappy

Been stuck on a train for about 12 hrs. It's been horrible. Amtrak needs to step their game up.

People getting arrested, smoking weed and stealing the conductors phone. This has been an eventful Amtrak ride.

Update: they just told us to stay in our seats cuz they're gonna rock the train back and forth #shittingmypants

Update: someone is sobbing hysterically and it is NOT helping

Update: I will be suing Amtrak

OMG I HAVE CRACKERS🙌

Rail service is now screwed up across the country, including the Northeast Corridor. The LIRR, NJ Transit, and a few subway lines are all experiencing delays, to say nothing of the icy roads.

Made it to the isle of Manhattan on an icy train after 28 hrs. Thanks @Amtrak for somehow getting us out of Chicago. pic.twitter.com/jNktasMqrB

It’s currently about 5 degrees in New York City, and while schools are open, the Office of Emergency Management is warning of “life-threatening wind chill … hypothermia, frostbite and other serious health problems.” (Do you have frostbite? Check this handy chart!) It’s getting better but barely: Tonight will max out at around 10 degrees.

As usual, life is worse in the Midwest, where entire cities are closed down, but worth noting for New Yorkers is that the weather system is moving toward us. 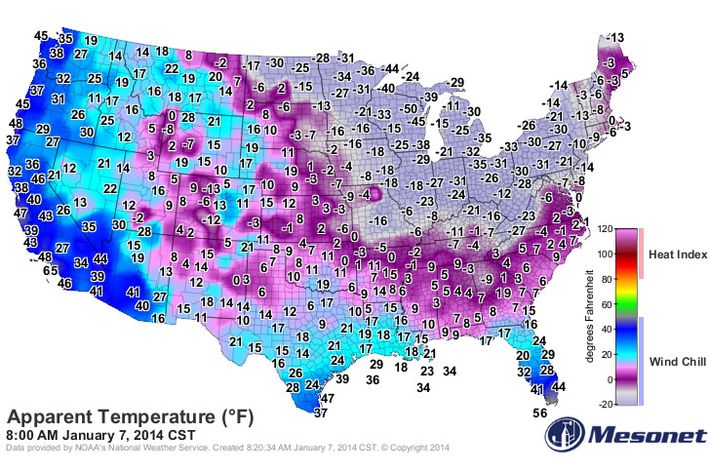 Update, 4 p.m.: Congratulations, New York City, on hitting double-digits! It’s about 13 degrees this afternoon, with Wedesday set to warm up to the mid-twenties.

But AccuWeather has good news:

Reprieve is on the way from the frigid air and the Polar Vortex that has briefly brought life-threatening conditions to approximately 240 million people in the United States and southern Canada this week.

Both will depart during the second half of this week, and a far-reaching January thaw will begin.

In the meantime, there’s not much to do but make your own fun: