Her eyes are so cold. Photo: Jin Lee/Bloomberg/Getty Images

Do not be fooled by the balmy 55-degree temperatures in New York City this morning — it’s about to get way worse. The nationwide “polar vortex,” plus what is known in some ridiculous corners as Winter Storm Ion, is about to make everyone miserable. By lunchtime, it’ll be in the high thirties (rain is likely), according to the forecast, then it’ll be freezing, and by tonight, single digits. That’s about a 50-degree drop during the course of a single day. It could be worse.

You could be in North Dakota: 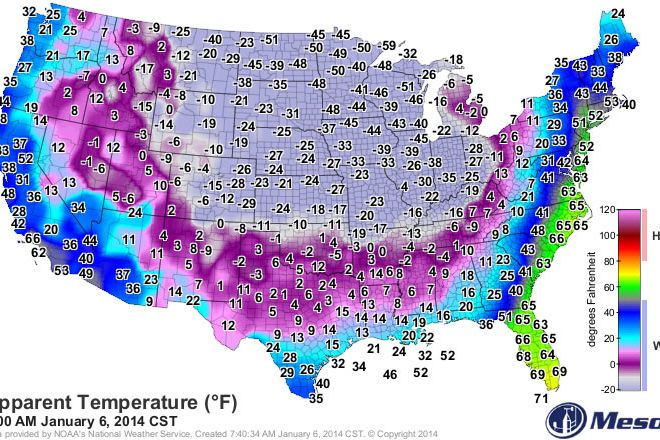 Check out this pic of Michigan from space. Wow! #snow #winter #puremichigan pic.twitter.com/N2sLd2XMMf

Last night, an Amtrak train from Detroit to Chicago froze in Kalamazoo, delaying passengers, who at least had heat, for nine hours:

@cenelson08 Feel free to use my tweets! I didn't get pics on train but did snap a few of exterior when we arrived. pic.twitter.com/Whkvp2uMl1

To illustrate just how insane it is out there, watch what happens when meteorologist Eric Holthaus throws a pot of boiling water into the Wisconsin air, where the wind chill is down to -51 degrees (spoiler: it magically turns into snow):

As is, the city is facing a wind-chill advisory, a dense-fog advisory, a wind advisory, and an all-around “hazardous weather outlook,” in the terminology of the National Weather Service. (Tri-state area, beware: “WIND CHILL VALUES … AS LOW AS 20 BELOW ZERO IN ORANGE … PUTNAM AND WESTERN PASSAIC COUNTIES … AND 15 BELOW ELSEWHERE.”) Already this morning, the subway was delayed as a result of weather, with the 1, 2, 3, 4, 5, 6, 7, A, C, E, B, D, F, and M trains affected.

Freezing temperatures are expected in every state except Hawaii on Monday or Tuesday. Yes, even Florida, where 60 degrees is considered bone-chilling. The good news: By Wednesday night in New York, “near steady temperature in the lower 20s.” Paradise, basically.

Update, 3:30 p.m.: As promised, temperatures have started to dive, and the consequences of not being able to go outside are reverberating.

For instance, air travel: “JetBlue announced Monday that operations at Boston, Newark, JFK and LaGuardia airports will be stopped entirely at 5 p.m. in an effort to catch up with dozens of weather-related delays and cancellations. Operations will begin to ramp up again at 10 a.m. Tuesday and the airline expects to be fully operational by 3 p.m. Tuesday.” American Airlines has also canceled more than 900 flights.

Meanwhile, Chicago, where schools will remain closed through tomorrow, looks a bit like outer space:

And the people look thrilled:

A ‘Polar Vortex’ Is About to Freeze the Country

+Comments Leave a Comment
Polar Vortex Will Ruin Your Day

THE FEED
8 mins ago
what we know
what we know
Gunman Kills At Least 20, Including 18 Children, at Texas Elementary School
By Intelligencer Staff
An 18-year-old gunman targeted Robb Elementary School in the town of Uvalde, which is west of San Antonio. The gunman is dead.
4:00 p.m.
2022 midterms
2022 midterms
Republicans May Have Sabotaged Their Best Chance to Beat Whitmer
By Matt Stieb
Five GOP candidates for governor in Michigan — including the top two contenders — faked signatures to get their names on the ballot.
3:17 p.m.
adam neumann
adam neumann
Adam Neumann’s New Business Plan
By Kevin T. Dugan
The former WeWork CEO wants to get rich(er) by helping corporations appear more environmentally sustainable than they really are.