People of the Internet, please stand by. Your fun, flirty, fleeting photos from Senator Rand Paul will soon be delivered via Snapchat, the teenybopper temporary-image-sharing app of which the U.S. senator and 51-year-old man is now a member. “For daily updates & behind-the-scenes footage follow: senatorrandpaul. I’m sending my first snap tonight,” Paul tweeted on Wednesday. According to Politico’s Mike Allen, who had the exclusive on Paul’s new social-media presence, the senator “learned about Snapchat by reading about its growing influence and running into people around the country who use it.”

Presumably to make the point that it’s not so weird for Paul to join, Allen notes that brands such as the New Orleans Saints, New York Jets, Taco Bell, and Acura are also using Snapchat. But so what? The Wire contends that Snapchat won’t make Paul cool, and that’s probably right. As with parents on Facebook, it’ll just help make Snapchat lame. 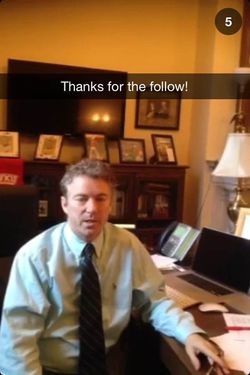 +Comments Leave a Comment
Rand Paul Has a Snapchat for You, He Hopes