“When has the left ever cared about facts,” moans Conn Carroll, in a column titled “Obamacare’s Cost Control Failures.” I take his implication to be that Carroll does care about facts, though the facts themselves do not support this conclusion.

A few days ago, Carroll wrote a column asserting, “in Massachusetts … all of Obamneycare’s cost containment claims have been exposed as complete frauds.” He then asked me on Twitter to consider this point (“if ACA [the Affordable Care Act] fails to control costs, like it’s failing in Mass, is it still a success?”). I replied that, in fact, none of the cost controls in Obamacare have been used in Massachusetts at all.

Carroll’s latest column is a reply of sorts. I say “of sorts” because he does not link to or mention my piece about him. Carroll rounds up a handful of analysts who believe that the cost controls in Obamacare are not yet proven successful. The context of the debate is that health-care cost growth has fallen dramatically in the last four years: 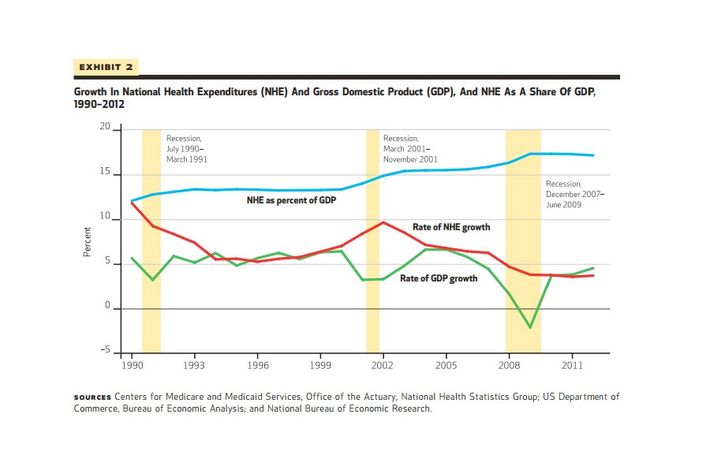 There is an active scholarly debate about the degree to which the various cost reforms in Obamacare have caused this trend. Some of the skeptics cited by Carroll have cautiously attributed the slowdown to other factors, like the recession or the unrelated slowdown in prescription drug prices. Other analysts (whom Carroll does not acknowledge) are more optimistic. In a story last year, which Carroll does link, I cited some of that evidence — hospitals reporting efforts to reduce infections and other readmissions in response to new financial incentives, employers planning for the tax on expensive insurance by shopping for cheaper plans, the creation of coordinated care models.

I was careful to note that the evidence is early and provisional:

And health experts increasingly expect the reforms will bear fruit. “The ongoing slowdown in the health-care growth rate defies historical post-­recession patterns and is likely to be ­sustained,” concluded Price­water­house­Coopers in June. “It appears that the reforms will stick and health-care exchanges and other policies will bring competitive pressure to markets,” says Randall Ellis, a professor of health-care economics. “Although the proof for this point of view is not yet definitive,” reports the Health Affairs blog, “the depth and breadth of change suggest that significant transformation in the nation’s delivery system is under way.” Among health-care wonks, this is no longer a controversial assertion: The evidence thus far suggests Obamacare’s cost reforms are a staggering success.

Now look back at all the quotes in the last paragraph. Every one of them has qualifiers attached: likely, appears, not yet definitive. That, appropriately, is how people in the worlds of academia and economic forecasting express themselves. The future is uncertain by definition.

The evidence to date is as positive as it could be, but there’s only so much we can conclude from three years’ worth of data. If health-care costs had grown well above projections, rather than well below, I am confident that all conservatives would be citing this as evidence against the success of cost controls, and many of them would be holding it up as absolute proof. That kind of hackery is not something to emulate, though. The case for skepticism is entirely that it’s very early. We don’t know what will happen.

Carroll argues that Obamacare is failing its mission to reduce cost inflation because the total level of health spending has increased:

health spending was actually .1 percent higher between 2010 and 2012 thanks to the ACA.

And looking ahead, CMS predicts that Obamacare’s Medicaid and insurance subsidies are set to spike health spending by 6.1 percent in 2014.

Is there a spike in health-care costs projected for next year? Yes. Does this show that Obamacare has failed to bend the cost curve? Absolutely not.

The stated purpose of the law was to pair an expansion of health-insurance coverage with a gradual reduction in the per capita cost of health insurance. In 2010, the journal Health Affairs displayed how the law was supposed to change national health-care spending. The blue line was the pre-Obamacare status quo, and the red line represented the projected impact of the new law: 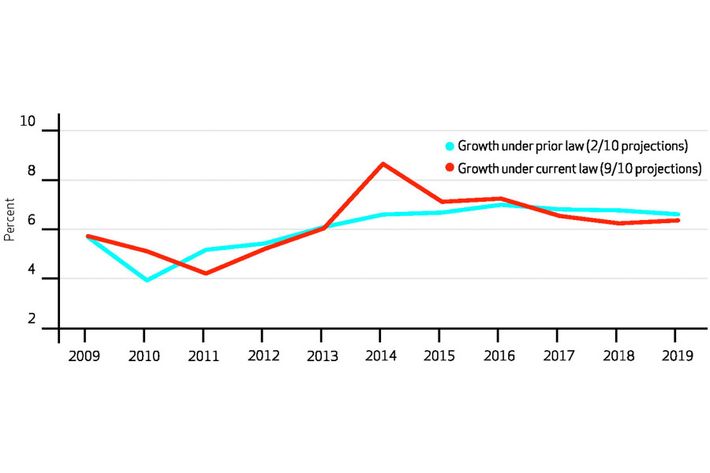 That spike in the red line represented the influx of millions of newly insured patients into the system. Carroll is pointing to the spike as proof the law’s cost controls have failed. The onetime spike is completely compatible with the law bending the cost curve down.

Indeed, what’s changed since 2010 is not the sudden appearance of a spike. It’s that costs have risen much, much more slowly than anticipated. The chart from 2010 projects costs rising over 6 percent a year. Instead they’ve risen by at or under 4 percent a year. Since the passage of Obamacare, the Congressional Budget Office has already reduced its ten-year cost estimates by several hundred billion dollars.

It’s possible the unexpectedly good early news is a pure fluke unrelated to Obamacare. But Carroll isn’t arguing for caution. He’s arguing that the facts have shown the cost reforms to have failed. He initially argued that the law’s cost reforms were in effect in Massachusetts, and were not in effect in the United States writ large. He is no longer defending these false claims, but he hasn’t bothered to correct them, either.

+Comments Leave a Comment
‘When Has the Left Ever Cared About Facts?’