Yesterday, the Congressional Budget Office issued a report weighing in on the Obama administration’s proposal to raise the minimum wage. The report carries political importance not because a minimum wage hike has a snowball’s chance in hell of passing alive through the Republican-controlled House of Representatives, but because Democrats have decided to use the highly popular proposal as a campaign message. The CBO concluded that raising the minimum wage to $10.10 would be a mixed blessing – it would lift incomes for 16.5 million low-wage workers, but also push about half a million out of the workforce altogether. As with the CBO’s recent analysis of Obamacare, the headline conclusion – “kills jobs” – is in this case accurate, and furnishes Republicans with a talking point of their own with which to push back.

Democrats immediately challenged the CBO’s conclusion that a higher minimum wage would reduce employment. Mike Konczal and Jared Bernstein argue that the CBO, which by design places itself in the center of the economic consensus, instead came down a bit to the right of center. Perhaps so, but the CBO certainly didn’t land very far from center, either. The vast majority of research finds that modest hikes in the minimum wage have little to no effect on employment. CBO went with “little” rather than “no.” This chart displays the findings of a huge survey of minimum wage studies. The results are clustered around zero impact, but the cluster is weighted a bit more heavily on the left side, indicating a small impact:

I’m unqualified to referee the academic debate. Whether or not it is precisely correct, the CBO report reflects the general state of the economic consensus on raising the minimum wage. It pushes up wages for the vast majority low income workers, while making a small percentage of low-wage jobs too costly to be worthwhile for employers. The trade-off as described by the CBO strikes me as eminently worthwhile.

I suppose that if you care a lot about making sure as many workers as possible have a job, however poorly paid, and don’t care very much about low-income workers earning higher wages, you could embrace this report as a case against a higher minimum wage. That’s the conclusion embraced by the Wall Street Journal editorial page, the National Review, and gleeful conservatives everywhere.

And yet if you did care so much about reducing unemployment that you were willing to suppress wages for millions of the most hard-pressed workers in order to squeeze every last bit of joblessness out of the market, what other elements of the Republican economic agenda make even the slightest bit of sense?

Another event that took place this week was the five-year anniversary of the American Recovery and Reinvestment Act, or the stimulus. Both parties marked the occasion by reiterating their long-held positions. Democrats believe the stimulus salvaged millions of jobs and prevented a full-scale depression. Republicans maintain it prolonged and worsened the crisis.

Since the outset of the Obama era, the GOP has formally committed itself to Austrian economics or some other intellectually amorphous defense of austerity. Higher spending cannot create jobs, Republicans say. And they have acted on this belief, using every bit of leverage at their disposal to clamp down on spending, and to block every proposal to stimulate the economy through infrastructure investment, temporary tax cuts, or any other Keynesian measure. Whatever the effects of the Party’s much-touted wave of economic reform, it has left the anti-Keynesian wall intact.

And yet the Congressional Budget Office, now brimming with conservative credibility, has spent the last five years issuing report after report assailing the Republican position. Republicans weeping for the half-million or so jobs that would be destroyed by a higher minimum wage would be shocked to learn that, according to the CBO, they have destroyed 200,000 jobs by blocking the extension of emergency unemployment benefits (which lift the incomes of destitute workers, creating higher demand). Likewise, the budget sequestration they have embraced as their cherished second-term Obama trophy has destroyed 900,000 jobs. What’s more, the CBO has maintained all along that the hated stimulus saved millions of jobs.

The CBO’s findings about the stimulus place it firmly in the center of the economic consensus. A recent panel of economists reflected this consensus: 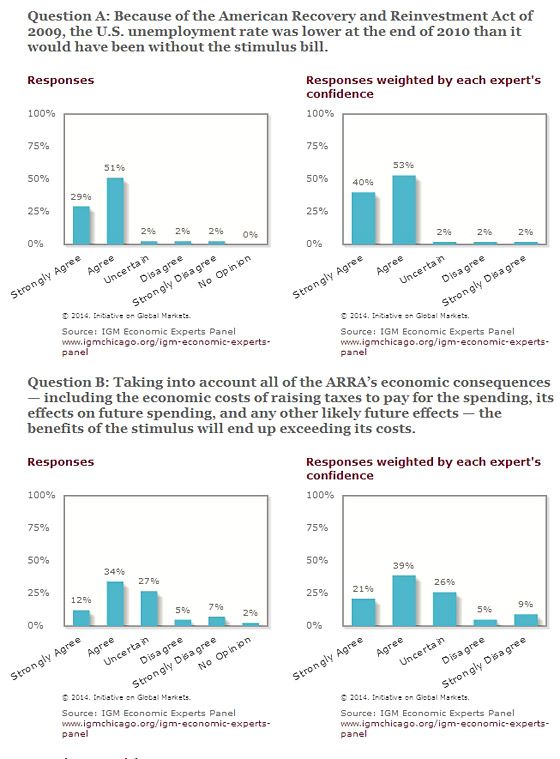 The Republican Party has remained insulated from any political liability as a result of its position. The economics profession in general, and the CBO in particular, have spent five years practically screaming at Republicans to lift their boot from the throat of the economy. Those screams have simply faded into the background as a continuous, dull roar. The CBO’s recent reports suggesting Obamacare and a higher minimum wage may have some (smaller) impact on employment have paradoxically broken through precisely because they have inverted the usual roles: The party accustomed to dismissing the CBO as Keynesian eggheads has received it joyously, while the party accustomed to heeding its findings has had to painfully spin.

If you are looking to make sense of all these debates, note that the CBO forecasts that the stimulus, minimum wage, and Obamacare all push up wages for low-income workers, albeit with some trade-offs. In every case, Republicans have deemed the trade-off to be unacceptable.

When (like with the minimum wage and Obamacare) the trade-off is higher unemployment, then higher unemployment is intolerable, even if Republicans are happy to accept it in other contexts (like stimulus). When the trade-off is higher deficits, then higher deficits are an unacceptable price to pay for lower unemployment, even if Republicans will pay it in other contexts (like making the Bush tax cuts permanent or rescinding pay-fors in Obamacare.) Some conservatives are suggesting a higher Earned Income Tax Credit as an alternative to a higher minimum wage, but the prospects of Republicans enacting that are laughable. And when you take all these positions together, the party’s economic priorities are perfectly clear.

+Comments Leave a Comment
The CBO and the Bizarre, Partisan Jobs Debate

THE FEED
5/13/2021
nyc mayoral race
nyc mayoral race
Who Won the First NYC Mayoral Debate?
By Matt Stieb
Several candidates and one pivotal issue managed to rise above the Zoom grid.
5/13/2021
the economy
the economy
3 Reasons April’s Inflation Will Probably Be Temporary
By Eric Levitz
Price rises were concentrated in sectors heavily impacted by the pandemic.
5/13/2021
the national interest
the national interest
Spies Somehow Failed to Get Trump Officials to Call Him Stupid on Hidden Camera
By Jonathan Chait
Imagine being unable to get somebody to volunteer the most common opinion in America.

5/13/2021
politics
politics
Marjorie Taylor Greene Hassled AOC Inside the Capitol
By Nia Prater
The Georgia congresswoman followed her out of the House chamber, saying she supported “terrorist” groups and questioning her refusal to debate her.
5/13/2021
mlb
mlb
New York Yankees Somehow Have 8 COVID Cases in Vaccinated Staff
By Matt Stieb
The team’s breakthrough rate is orders of magnitude higher than the U.S. population, in which 0.008 of those fully vaccinated have contracted COVID.
5/13/2021
polls
polls
Polling the Midterms Is Going to Be Risky Business
By Ed Kilgore
It’s hard to tell whether 2020 polling errors were about Trump, the pandemic, or something more basic and replicable.
5/13/2021
covid
covid
CDC Says Fully Vaccinated People Basically Don’t Need to Wear Masks
By Paola Rosa-Aquino
The agency finally updates guidance, with a few caveats, after ample evidence that vaccines are effective against transmission of the coronavirus.
5/13/2021
politics
politics
Andrew Yang’s Rivals Accuse Him of Cheating … on a Pop Quiz
By David Freedlander
Hours before the first mayoral debate, campaigns sling mud over the Times test he aced and they didn’t.
5/13/2021

Oh, wow. Cant wait to see the cleanup on this one.
—@zackfinknews
5/13/2021
explainer
explainer
What We Know About the Colonial Pipeline Shutdown
By Paola Rosa-Aquino and Chas Danner
The pipeline is now flowing as of 5 p.m. on Wednesday, though the company says it will take several days for supply to return to normal.
5/13/2021

Manchin to support measured voting reform in lieu of sweeping Democratic proposal
—ABC News
5/12/2021
crime
crime
What Happens Next After the Derek Chauvin Verdict
By Nia Prater
A judge ruled that there were several aggravating factors in the murder of George Floyd, which could mean a longer sentence for Derek Chauvin.
5/12/2021
politics
politics
Andrew Yang Attempts to Clean Up Controversy Over Pro-Israel Tweet
By Nia Prater
After drawing condemnation from the left and praise from some Republicans, the NYC mayoral candidate said his initial tweet was “overly simplistic.”
5/12/2021