Newly unredacted texts between New Jersey Governor Chris Christie’s enforcers, both since banished because of the George Washington Bridge Scandal, reveal a bizarre obsession with getting revenge via transportation delays. While the new messages don’t tell us anything more about the involvement of the governor’s office, they are basically bureaucratic fan fiction.

Six days after his former deputy chief of staff Bridget Anne Kelly’s “time for some traffic problems in Fort Lee” message, she was back at it with the governor’s Port Authority exec David Wildstein, sharing fantasies about what they’d do to others who’d pissed them off. Their excitement is palpable.

First, Wildstein, who has since turned on Christie, sent Kelly a photo of local Rabbi Mendy Carlebach, calling him the “Jewish Cid Wilson,” a reference to another New Jersey political figure. “I think this qualifies as some sort of stalking,” responded Kelly. “You are too much.”

“You are really so funny,” she added.

“And he has officially pissed me off,” said Wildstein. “We cannot cause traffic problems in front of his house, can we?” Kelly offered.

“Flights to Tel Aviv all mysteriously delayed,” he joked. 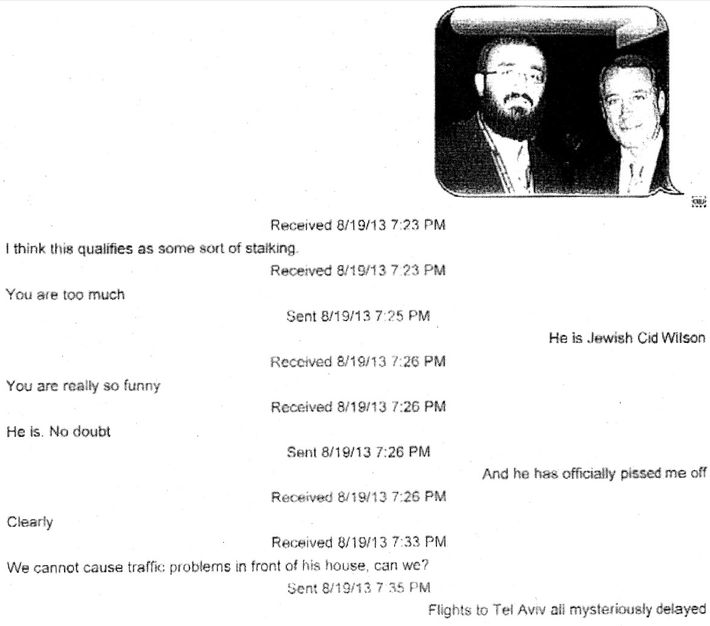 “I am clueless,” the rabbi told the New York Times today of what he did to get on their bad side, denying any “bad interactions.” This is New Jersey politics.

Elsewhere in the now-public messages, as noted by Business Insider’s Hunter Walker, is an exchange between Wildstein and Christie’s Deputy Executive Director of the Port Authority, Bill Baroni, about the growing press interest in the Fort Lee lane closures. Baroni assures Wildstein that one of the governor’s communications people, Maria Comella, “didn’t think much of the story. Said Nobody paying attention. “Bridget same,” said Wildstein.

“What did general want?” asked Wildstein. No explicit word on who the “general” is — the rest of the back-and-forth remains redacted. 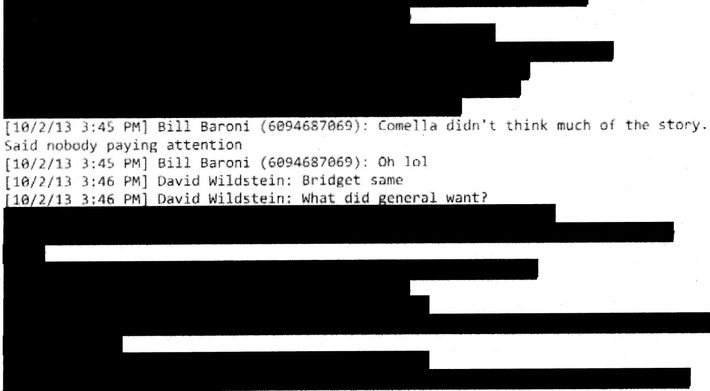 The Bergen County Record has more from the latest batch, including the involvement of yet another friend from Christie’s childhood (Wildstein and the governor go way back):

“Local ft lee traffic disaster,” Michaels wrote to Wildstein at 8:39 p.m. on Sept. 10, the second day of the lane closures.

Michaels and his brother were childhood friends of Christie, and like Wildstein, they all grew up in Livingston.

And more intimate moments from inside Team Christie:

A message released for the first time also shows that Bill Stepien, Christie’s former campaign manager, wrote to Wildstein on Oct. 1 in an apparent reference to Port Authority Executive Director Pat Foye after an internal agency email was leaked to the press. Foye, who was appointed by New York Gov. Andrew Cuomo, reversed the lane closures in the email and called them abusive and potentially illegal.

“Holy shit, who does he think he is, Capt. America?” Stepien wrote to Wildstein on the same day the email surfaced publicly.

As the heat picked up from the press in November, however, Baroni wondered to Wildstein, “Are we being fired?” 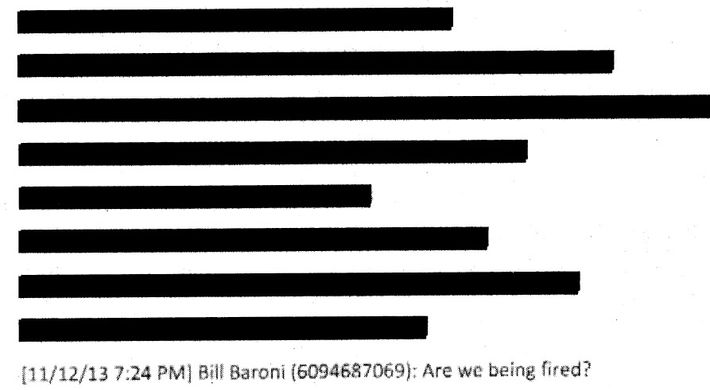 THE FEED
3:44 p.m.
student loans
student loans
The War on Student-Debt Forgiveness Begins
By Sarah Jones
Republican-led states sue over Biden’s plan to free millions of people.
3:01 p.m.
early and often
early and often
MAGA Candidate in Ohio Keeps Lying About Military Record
By Matt Stieb
J.R. Majewski says he was a combat veteran who left the Air Force because of a brawl, but records show a much less noble career.
2:25 p.m.
tremendous content
tremendous content
Bonkers Revelations From Maggie Haberman’s Trump Book, Ranked
By Margaret Hartmann
If you want more information on Trump being weird with toilets and belittling Jared Kushner, Confidence Man has you covered.

2:10 p.m.
russia
russia
The Mysterious Attack on Two Major Gas Pipelines for Europe
By Kevin T. Dugan
What do we know about the apparent sabotage of Russia’s Nord Stream 1 and Nord Stream 2 deep under the Baltic Sea?
1:23 p.m.
sports
sports
Aaron Judge Could be the Crossover Star Baseball Desperately Needs
By Ross Barkan
There’s nothing like a home-run chase to get normal people interested in the sport again.
11:33 a.m.
what we know
what we know
Ian Downgraded to Tropical Storm As Florida Tries to Recover: Latest Updates
By Intelligencer Staff
One of the strongest storms in memory barrels into the densely populated Gulf Coast, bringing with it a massive storm surge.
10:03 a.m.
the national interest
the national interest
Republican House Majority Will Try to Melt Down Global Economy
By Jonathan Chait
Democrats need to sabotageproof the government while they still can.
9:28 a.m.
court appearances
court appearances
Elon Musk Deleted Messages and 3 Other Takeaways From the Latest Court Hearing
By Kevin T. Dugan
“They point to something that’s been destroyed,” said the judge of the missing text messages.
8:00 a.m.
at home in asian america
at home in asian america
Confessions of an Asian Diversity Hire
By Anonymous
“It’s not like they put a sign on your desk that reads ‘Diversity Hire.’ You just know.”
9/28/2022
the gaffe machine
the gaffe machine
Joe Biden Asks About Whereabouts of Congresswoman Who Died
By Matt Stieb
The president was looking for Representative Jackie Walorski during a White House speech — the congresswoman was killed in a car crash two months ago.
9/28/2022
2022 midterms
2022 midterms
Pennsylvania’s Doug Mastriano May Be 2022’s Worst Candidate
By Ed Kilgore
The Republican extremist and incompetent campaigner can become governor only if things get weird in November.
9/28/2022
announcements
announcements
Introducing Reread: Real Estate Mania, a New Newsletter Miniseries
By The Editors
Classic stories of the next hot neighborhood, the renovation that seemingly never ends, and the living situation that’s really too good to be true.
9/28/2022
2022 midterms
2022 midterms
Get Used to Close Elections With Huge Consequences
By Ed Kilgore
We may have entered a new era of political gridlock in which swing voters are scarce and evenly matched parties clash again and again.
9/28/2022
games
games
Brett Favre Was Always Pretty Awful
By Will Leitch
Thanks to his legion of defenders, the ex-QB thought he could get away with anything. An egregious scandal in Mississippi shows there are limits.
9/28/2022
tremendous content
tremendous content
The Fetterman Campaign Should Just Hire Dr. Oz
By Margaret Hartmann
Oz created a new slogan for his opponent, saying his hoodies show that “he’s kicking authority in the balls.”
9/28/2022
crime
crime
Inside the Ransomware Gangs That Extort Hospitals
By Renee Dudley and Daniel Golden
They shut down patient care and put lives at risk. Would the pandemic finally slow them down?
9/27/2022
early and often
early and often
Will Any Republicans Jump Into Trump’s 2024 Snake Pit?
By Ed Kilgore
A lot of Republicans might be tempted to take on a weakened Trump in the primaries, but they’ll remember how he treated his 2016 rivals.
9/27/2022
the city politic
the city politic
The Growing Cover-up of Rikers Island Deaths
By Matt Stieb
The head of the city’s jails told aides to keep a dying man off his “department’s count,” according to the New York Times.
9/27/2022
just asking questions
just asking questions
Is the Fed’s Cure for Inflation Worse Than the Disease?
By Benjamin Hart
Economic analyst Ryan Sweet on the tricky balance Jerome Powell is trying to strike and how Europe’s woes could spread to America.
9/27/2022
early and often
early and often
‘It Was All a Hoax’: Migrant Sent to Martha’s Vineyard by DeSantis Speaks
By Paula Aceves
A Venezuelan migrant on his mysterious, terrifying journey to Martha’s Vineyard as a political prop of Ron DeSantis.
9/27/2022
hurricane season
hurricane season
Tampa Could Be a Bull’s-eye for Hurricane Ian
By Matt Stieb
The quickly intensifying hurricane could bring storm surges of up to ten feet to the low-lying Tampa metro.
9/27/2022
early and often
early and often
If You Really Love Democracy, You Can’t Love the U.S. Senate
By Ed Kilgore
Mitch McConnell and Kyrsten Sinema are big on respecting the Senate as an institution, but valuing democracy means working to minimize its impact.
9/27/2022
at home in asian america
at home in asian america
For Domestic Workers, the Asian Class Divide Begins at Home
As told to Arya Sundaram
Five nannies from the Philippines, Nepal, and China open up about what it’s like to work for their Asian American employers.
9/26/2022
space
space
NASA Just Hit an Asteroid to See If It Could
By Chas Danner
Take that, floating rock.
9/26/2022
early and often
early and often
McConnell Seeks Revenge on Manchin for Inflation Reduction Act
By Ed Kilgore
Sheer spite, not energy policy, is motivating a Republican effort to kill Manchin’s energy-permitting bill.