As if his life weren’t colorful enough already, the man charged with getting kids into college at the elite, high-pressure prep school Horace Mann has been accused of misbehaving like an evil teenager. Canh Oxelson, once a famous Tiger Woods impersonator, was charged with aggravated harassment, with a bonus restraining order, for allegedly threatening to send naked photos of his ex-girlfriend to her bosses, the New York Post reports. According to the complaint, he texted the woman explicit images he’d saved, along with the messages “Good luck loser” and “Can’t wait for folks to see this one.”

The criminal charges are just the latest chapter in quite the bio. Oxelson, 42, was airlifted as a child out of Saigon in 1975, as part of “Operation Babylift,” the Post reports. He went on to become a NCAA swimming champion, as well as a Harvard alum, and the admissions officer at University of Pennsylvania, before being hired by Horace Mann in 2011. (The school magazine featured him here.) 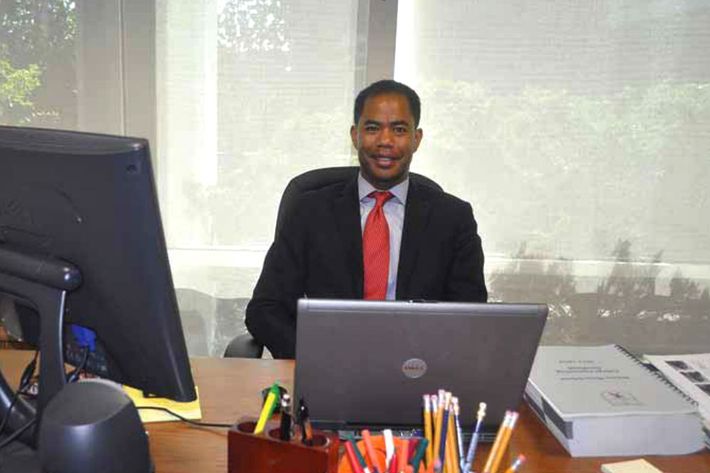 But most notable of all, he made a living pretending to be Tiger Woods. “Who does Canh Oxelson charge as much as $3,000 to impersonate at corporate golf outings?” Trivial Pursuit asked in its 2003 Genus edition. Called the “world’s premiere [sic] Tiger Woods impersonator,” Oxelson said in 2011, “I went to grad school at Harvard and I paid for a lot of it by doing this lookalike work.” The media loved it:

“After twelve years of doing this, I have hundreds of crazy stories but two of the most amusing involved women: At an event in New Jersey, a young woman once asked me to sign her breast. I didn’t,” he said in a 2010 interview. “And at a Palm Springs corporate event, a woman whispered in my ear that she’d been having Tiger Woods fantasies…”

But not unlike what happened to Tiger, sex has ruined everything. “The Head of School has directed Mr. Oxelson to work from home and refrain from coming to campus until further notice,” a Horace Mann spokesperson told the Post in light of the recent arrest. “Mr. Oxelson denies all of the charges in the complaint,” his lawyer said. “The evidence at trial will show that the allegations are not true.”

It’s terrible press nonetheless from a school that doesn’t need any more of it. Horace Mann has been the focus of increased media scrutiny since decades of sexual abuse at the hands of teachers was revealed in 2012. Last year, when it turned out someone from the school community was trying to sabotage students’ college applications, Oxelson was supposed to be the calming voice, writing to parents, “In 20 years of college admissions, I have never witnessed anything so disrespectful. For a student to have worked so hard for so many years, only to see those efforts jeopardized by an act of sabotage is absolutely unconscionable.”