Wow, okay, has everybody recovered from that opening ceremony? What a production! Oh, wait, you didn’t get to spend your Friday afternoon watching a pirated stream of the live broadcast? Well, let’s talk about what you missed. It was a lot! Aside from a couple of too-slick pre-produced films, one that took us through Russian culture via the Cyrillic alphabet and another that showed us a bit of history, the overall ceremony was all pageantry, patriotism, and fireworks. Oh, and athletes.

One interesting twist of timing had the athletes parade into the stadium after about a twenty-minute warm-up show. Nobody’s missing this shindig! The whole thing started with the aforementioned Cyrillic video: 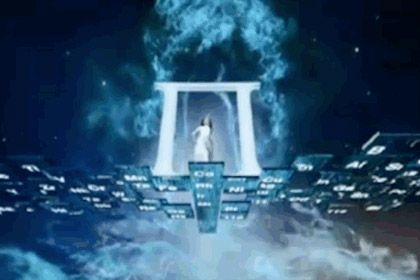 Then the first of many fireworks: 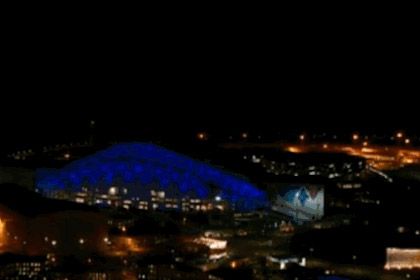 And then the show started, with a little girl dangling from a kite string, flying through a cloud-suspended landscape presumably meant to depict the great Russian homeland but looked an awful lot like a scene from Final Fantasy: 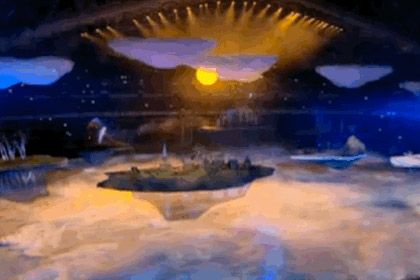 Finally, a dance routine led up to the first dramatic crescendo as a cluster of snowflakes morphed into the Olympic rings. But wouldn’t you know it, one of them went on the fritz (this probably wouldn’t have been as big a deal if #SochiProblems weren’t already a going concern on Twitter): 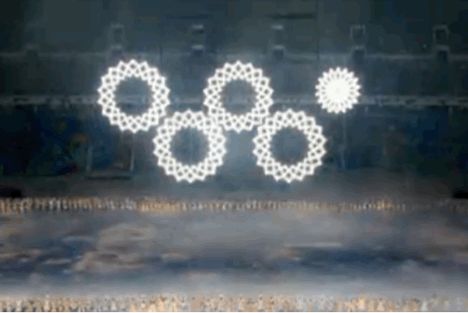 Another #SochiProblems moment (though far less obvious) came shortly thereafter, as a legitimately awesome-looking Russian flag made of people wearing glow clothes began to “wave.” All together now! 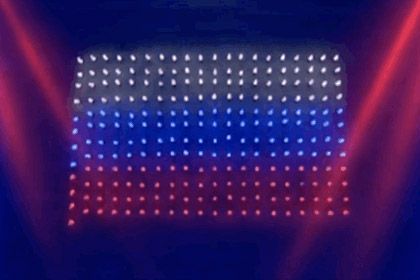 Then it was time for the athletes to parade in, most wearing snow clothes, coats, and sweaters. At least Bermuda’s tiny delegation was honest about the 50-degree weather. Also, note the Hunger Games Capital City outfits on the Russian hostesses: 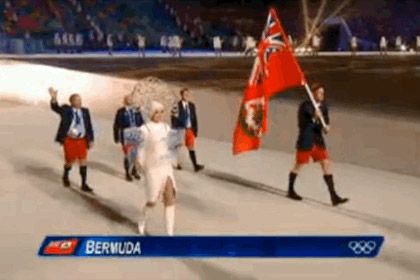 Germany came in wearing these rainbow jackets, which cannot possibly have been an accident in gay-unfriendly Russia. 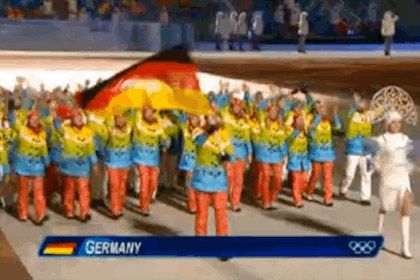 Oh yeah, USA time! Those sweaters look kind of sharp, right? Right? Fun fact: The teams entered in Cyrillic alphabet order, not Roman, so it was impossible (for us, anyway) to predict which team was coming next. 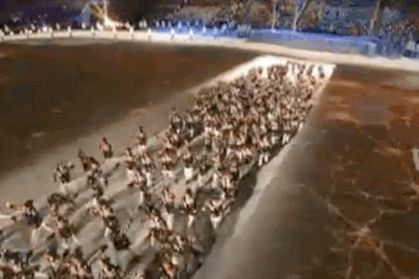 Finally, Mother Russia strode in to Daft Punk’s “Harder, Better, Faster, Stronger,” wearing these extremely fancy furry coats. Look, even Papa Putin got into it! (If you can call stiffly clapping along “getting into it,” which I think you kind of have to here): 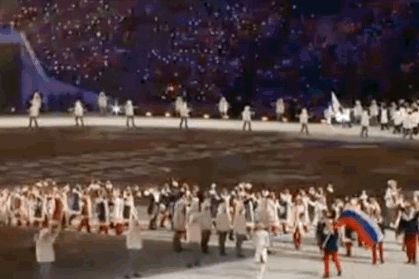 Oh, right, these games have mascots. Gigantic, animatronic mascots with creepy eyes. What the hell? 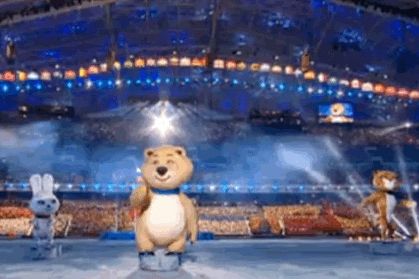 Next up, a gigantic flying troika made of light, which looked amazing. It helps to know that this is a major symbol of Russia, so we’re not dealing with any random horse fandom here. 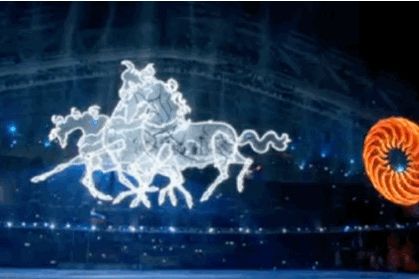 Then it was on to the medieval carnival. Very colorful and quite acrobatic: 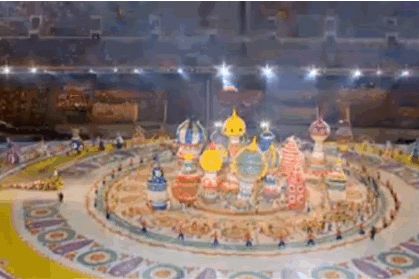 One particularly cool effect was the 3-D ocean and “ships” projected onto the floor to symbolize Peter the Great Russia’s imperial ambitions of yore. You’ve got to have a navy if you’re going to make that work. 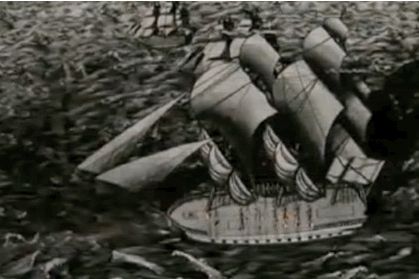 Then, in classic Russian fashion, we got a bit of ballet, culminating in Natasha’s dance scene from Leo Tolstoy’s War and Peace: 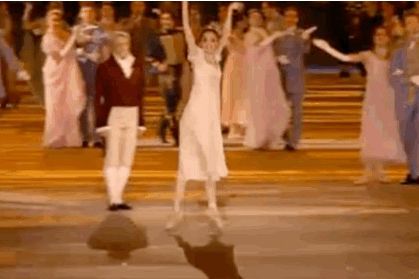 After that, it was on to the post-czar Russia with the revolution of 1917 and the rise of industrialization. A gigantic train soared above the arena floor, trailing geometric shapes and girders of the constructivist art movement, as an army of workers and industrial machines crawled across the floor: 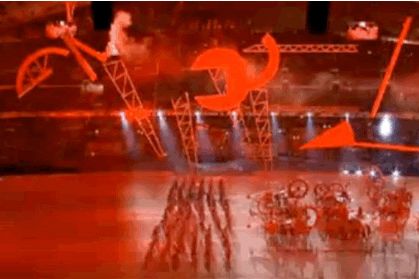 They sure didn’t spend much time on World War II: 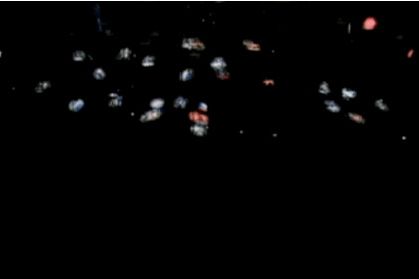 The mid-century was a lot of fun to look at, but wow, that airborne hammer and sickle are big! 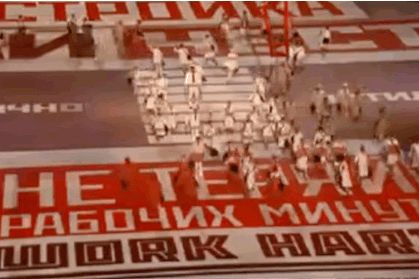 After a bit of speechifying and the Olympic anthem, we got some more pageantry, as lit-up skaters simulated Olympic events: 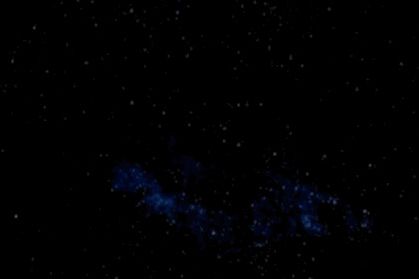 And finally, finally, it was time to light the cauldron. Who should bring the flame into the arena but tennis star Maria Sharapova? There was a rumor that Putin’s supposed girlfriend, Alina Kabayeva, would be lighting the torch, but in the end that didn’t happen (though she did carry it for a bit). 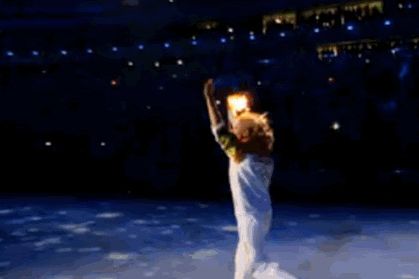 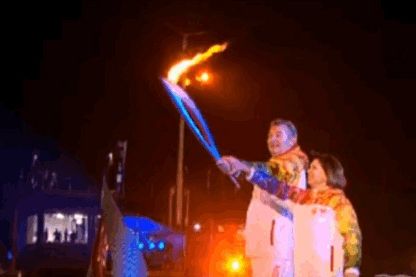 Oh, and as a bonus, check out the video of the Russian Ministry of Internal Affairs choir performing Daft Punk’s “Get Lucky” before the ceremony. It didn’t make the broadcast we watched but NBC captured it.

+Comments Leave a Comment
Relive the Opening Ceremonies Before They Start