Karl Rove is most famous for being architect of one of the worst presidencies in American history and then a Superpac strategist/delusional Romney campaign-night dead-ender. I’m a Rove junkie, and just as a snobbish fan of any popular band must have some obscure album he finds superior to the band’s most popular work, the Rove career function I find most delightful and rewarding is his work as a Wall Street Journal op-ed columnist. This is the medium that truly pulls back the curtain on Rove’s fascinating combination of insularity from facts outside the conservative pseudo-news bubble, delusional optimism, and utter lack of self-awareness. The Journal column is a weekly gift to amateur Rove psychoanalysts everywhere.

Today’s column begins with Rove’s bizarre belief that the health exchanges in Obamacare are a “single-payer” system, reflecting his apparent confusion about what this term means. (The single-payer in a single-payer system is the government, not the insurance companies in the exchanges.) But the main point is the Orwellian proposition that “Mr. Obama’s pattern is to act, or fail to act, in a way that will leave his successor with a boatload of troubles.” What kind of president would bequeath a boatload of troubles to his successor? Oh, the irresponsibility. The first count in Rove’s indictment is the budget deficit, which “was equal to roughly 40% of GDP when Mr. Obama took office. At last year’s end it was 72% of GDP.” One possible cause of this deficit might be the over-trillion-dollar annual deficit, that one George W. Bush handed over when he left office, along with the massive economic collapse.

Rove’s column goes on to express very strong views on the need for fiscal responsibility:

Then there’s Medicare, whose Hospital Insurance Trust Fund will go bankrupt in 2026. For five years, Mr. Obama has failed to offer a plan to restore Medicare’s fiscal health as he is required by the law establishing Medicare Part D. When Medicare goes belly-up, he will be out of office.

The Congressional Budget Office projects the Affordable Care Act will reduce deficits by more than a trillion dollars in its second decade. Yes, the Hospital Insurance Trust Fund is expected to reach insolvency by 2026, but when Bush left office, that projected insolvency date was nine years earlier. Meanwhile, Medicare’s projected spending has fallen by nearly $600 billion since the passage of Obamacare: 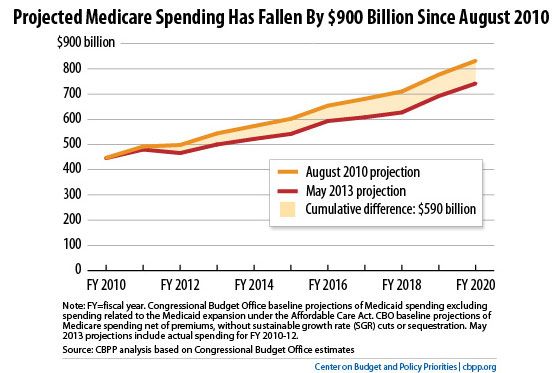 You can plausibly argue that these changes, combined with other cuts to long-term deficits, including partial expiration of the Bush tax cuts, don’t go far enough. But Rove is trying to make the case that Obama’s policies made the long-term budget outlook worse, which is false.

You know whose policies made the long-term outlook way, way worse? Yes, of course you do. Literally the entire Bush agenda – tax cuts, new domestic spending, major expansions of the military — was financed by debt. Rove tries to paint Bush as fiscally responsible because Obama has “failed to offer a plan to restore Medicare’s fiscal health as he is required by the law establishing Medicare Part D.”

That sentence is really the best. The point of the column is that Obama is terrible for leaving deficits to his successor. Rove is supporting this charge by citing a law his president passed, that created a major new debt-financed entitlement that Obama inherited. And he’s presenting this as Obama’s irresponsibility because the debt-financed entitlement Bush passed required the next president to come up with a law solving Medicare’s problems. And because Obama has alleviated but not completely solved Medicare’s problems, this shows that Obama has sloughed problems off onto the future. What a slacker, Obama is, sloughing off problems onto his successor rather than solve them as the president who came before him required him by law to do.

This leads us to the most Rove-ian paragraph in the column, and possibly in the entire history of the Rove oeuvre:

From the record number of Americans on food stamps to the worst labor-force participation rate since the 1970s to rising political polarization to retreating U.S. power overseas and increasing Middle East chaos and violence, Mr. Obama’s successor—Republican or Democratic—will inherit a mess.

What kind of president would leave his successor with a bad economy and a violent Middle East?