It’s pretty much miserable everywhere. While California suffers through its drought issues, the East Coast is being punished by yet another winter storm, including “significant – crippling – ice totals from Atlanta eastward along the I-20 corridor,” according to the National Weather Service. The Southeast, not used to this sort of thing, is really struggling: At least seven deaths have been reported, thousands of flights have been canceled, and 300,000 customers and rising are without power. Some areas in the Carolinas are expecting 18 inches of accumulated snow.

Update: As Wednesday evening creeps in, cities like Raleigh and Atlanta have already been paralyzed by the storm. In Georgia alone, 119,000 people have lost electricity, with problems extending west to Texas and Mississippi.

Roads are either abandoned, like The Walking Dead plus snow, or overrun with traffic:

It's not a zombie movie: Atlanta crippled by snow and ice http://t.co/H1oeGtQD3u pic.twitter.com/nmPaSF6yUm 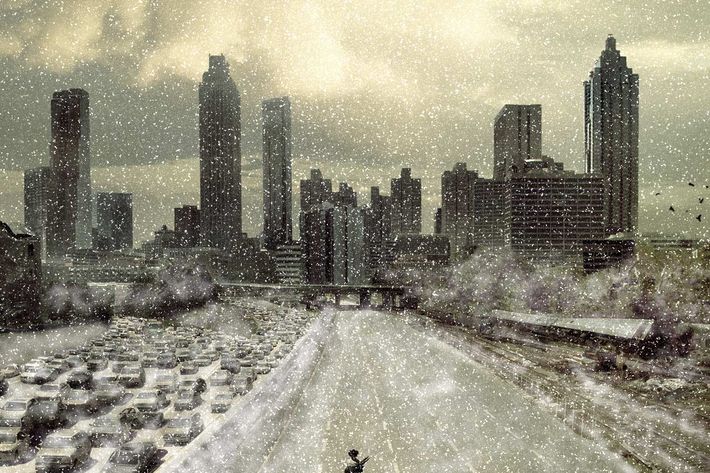 Preparations are makeshift at best:

Good Samaritans! RT @Jto68 Out here giving people rides let me know if anyone you know is stranded on Garrett road pic.twitter.com/dJWKzUdbSU

And it’s coming for us. New York, by this point, is used to this winter, but that doesn’t make it suck any less. The latest forecasts are getting worse:

NY1 tried to have some fun with the rapidly approaching storm, at least:

Here's your radar pic.Storm is more than 500 miles away still. Hits on Thursday pic.twitter.com/1kxdEVN94o

Wow rough crowd in twitter land tonight. Must be the weather. This radar pic any better ? pic.twitter.com/xjana1klj2

But as we approach Thursday, it gets less fun: Some current forecasts predict at least ten inches of snow starting tonight around 2 a.m. (The National Weather Service says eight to ten inches now.) And this one has stamina — the winter storm warming stretches from midnight until 6 a.m. on Friday. Temperatures will hover around freezing, and the already treacherous black ice will likely get a fresh coat. NYC is just seven inches of snow short of four feet for the season. Something tells us we’ll get there. 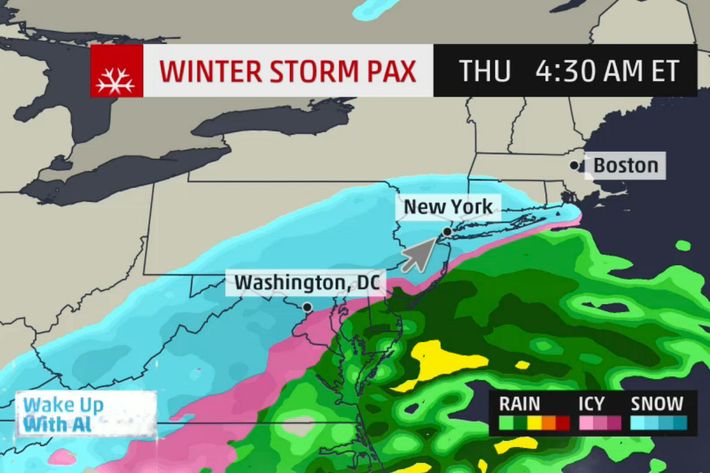