The shameful liberal bias that resulted in the outpouring of recognition for 12 Years a Slave has been well-documented by a handful of freedom-loving dissidents against the racial correctness of the Obama era. James Bowman of the American Spectator:

“If ever in slavery’s 250-year history in North America there were a kind master or a contented slave, as in the nature of things there must have been, here and there, we may be sure that Mr McQueen does not want us to hear about it.”

“Up front, there was the slavery from over a century ago (“Twelve Years a Slave”–read my review) and the never-ending cries of racism that justify Obamaphones, Obamacare, welfare, minority set-asides, affirmative action, and every other form of reparations now plaguing America. Race merchantry lives on at Oscar.”

But all these forms of liberal bias — myopic focus on the bad parts of slavery without any corresponding attention to the good parts, white guilt, and race merchantry – have a long pedigree. Long enough, indeed, to date back to the era of slavery itself. 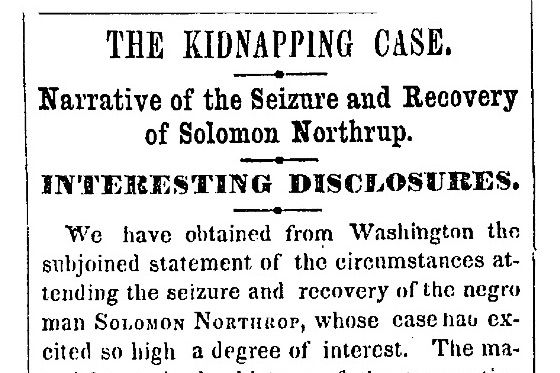 The Times’s account selectively frames the story to highlight the plight of Northrup, not hard-pressed job creators like Edwin Epps. Then in the middle of the account, it plunks this outrageous bit of editorializing:

It is all but justice to say that the authorities of Avoyelles, and indeed at New Orleans, rendered all the assistance in their power to secure the establishment of the freedom of this unfortunate man, who had been snatched so villainously from the land of freedom, and compelled to undergo sufferings almost inconceivable in this land of heathenism, where slavery exists with features more revolting than those described in “Uncle Tom’s Cabin.” …

He was sometimes compelled to perform acts revolting to humanity, and outrageous in the highest degree.

Talk about race merchantry! The North, lectures the Grey Lady, is “the land of freedom,” and the South a “land of heathenism.” Yes, the New York Times has been sneering at red-state America for 160 years.

12 Years a Slave and the Obama Era