The policy debate around health care is as intractable as ever. But, unnoticed amidst the partisan spin in the wake of the Florida congressional special election, the two parties are converging about the politics of health care. For much of the last four years, Democrats believed Obamacare would help them, and Republicans believed it would pose a fatal liability. Now they both believe the same thing. Democrats and Republicans alike grasp that Republicans have won the public relations war over Obamacare, and they have lost the public relations war over repealing Obamacare.

A new Bloomberg poll finds that 51 percent of Americans would keep the Affordable Care Act in place with “small modifications,” against 34 percent who favor repeal, and 13 percent who would make no changes at all. In his column today, Karl Rove makes two very telling concessions toward this consensus. First, he admits that Democrat Alex Sink managed to make Obamacare repeal a political liability:

Ms. Sink pummeled Mr. Jolly as wanting to “totally repeal ObamaCare instead of working in a bipartisan way to fix it,” to cite the language tested by her pollster.

And second, he notes that Republican David Jolly escaped that liability by promising unspecified alternative reforms:

Now, if they agree on what the public wants, why don’t they give it to them? Mainly because what the public wants is amorphous and probably impossible. People want to change it because news stories have emphasized the botched rollout and difficulties with implementation, and because both parties are promising to fix it. Many Americans are also unaware that most of the provisions of the law are already in effect: 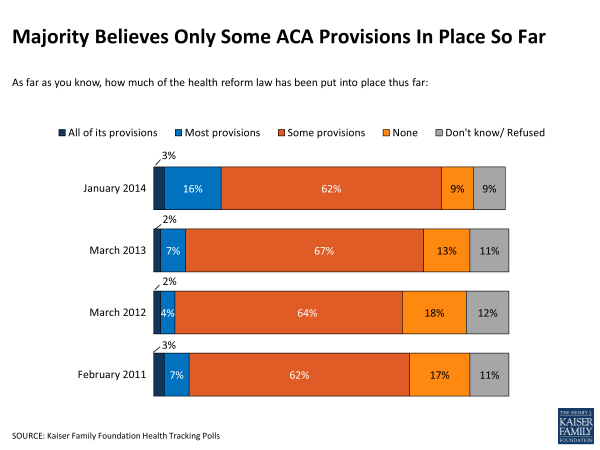 And they like all those provisions, except the individual mandate: 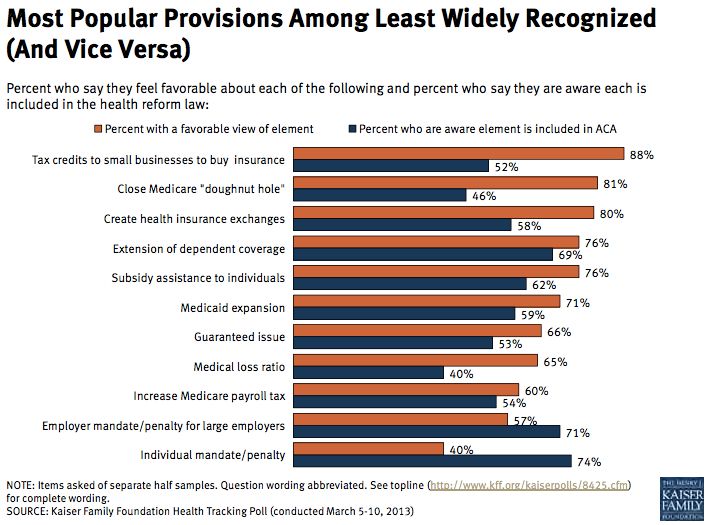 A “keep and fix” solution that polls well, then, would probably involve eliminating the individual mandate and keeping everything else. But the reason the mandate is there is because it’s hard to make the other parts work without it.

Now return to newly elected Representative Jolly, who took care to distance himself from repeal and cackle and instead promise vague alternative reforms. House Republicans promised earlier this year to vote on a unified alternative plan, but have slowly backed away from this promise. Yesterday, Paul Ryan appeared on William Bennett’s radio show and confirmed that “replacing” Obamacare still means voting on a mishmash of different message bills:

There are a lot of folks and many of us are working on various alternatives. There are good conservatives who just have various different ways of putting an alternative out there. So what I look at is, it’s not just one singular alternative that we have right now, it’s five or six, but in all of those alternatives there are a lot of common policies and themes and what you’ll see the House doing is passing individual reforms — you know one a week — on these common themes, these common policies we agree to, because we’re not going to say, look here is our big, you know, Republican version of Obamacare, here is what we should have done in the first place and we’ll do it step-by-step and then if you want to look at what a comprehensive alternative looks like, there are a lot of people who are offering those visions.

This isn’t a problem of simple disorganization. The lack of a single alternative bill is the entire key to making this work. It allows Republicans to avoid being pinned down to the trade-offs inherent in any proposal. Simply repealing Obamacare is really unpopular, so they don’t want to be for that. So they need to be for something, but any particular alternative is going to have unpopular stuff in it – bills that will raise taxes on people with employer-sponsored insurance, or let insurance companies jack up prices on people with preexisting conditions, or charge more to women, and on and on. Having a bunch of alternative plans lets candidates pick and choose whatever pieces of any given alternative they want to emphasize at any time without advocating the whole.

The public likes keeping the parts of Obamacare where they get money, and opposes the parts where they pay money. In other words, Obamacare, politically, is becoming like just about every other government program.

+Comments Leave a Comment
Democrats and Republicans Agree on Obamacare