Last week, with days until the launch of his new ESPN-owned FiveThirtyEight data-journalism super-site, stats god Nate Silver said he was “75 or 80 percent ready” to go live, just enough in his estimation. “It’s like playing poker for no money — you can learn some elements of strategy,” he explained of the behind-the-scenes prep, “but unless your neck is on the line, you’re not going get over that final 20 percent of tough stuff you have to learn.”

This afternoon, he played the hand he’d been holding close to the vest. The result is sleek — lots of white space, like its brother site, Grantland — and easy to navigate, well stocked with a carefully curated mix of the new FiveThirtyEight’s stated focuses: not just sports and politics, but science, economics, and the work-in-progress “life” section. Below, our first impressions, because why put something on the internet unless you want it to be judged prematurely.

Lead Story: “What the Fox Knows,” by Nate Silver, a 3,500-word opening salvo, with six charts, expanding upon what he told Daily Intelligencer last week about the site’s logo and philosophy:

The fox logo comes from a quote which was originally attributable to an obscure Greek poet: “The hedgehog knows one big thing and the fox knows many little things.” The idea being that we’re a lot of scrappy little nerds …

Most Nate Silver-ish Opinion in Nate Silver’s Introductory “Manifesto”: “This was and remains a tremendously overrated accomplishment … It wasn’t all that hard to figure out that President Obama, ahead in the overwhelming majority of nonpartisan polls in states such as Ohio, Pennsylvania, Nevada, Iowa and Wisconsin, was the favorite to win them, and was therefore the favorite to win the Electoral College.” —On predicting 50 out 50 states in the 2012 presidential election

Next in the Cross Hairs: Peggy Noonan. (“… wrote a blog post on the eve of the 2012 election that critiqued those of us who were ‘too busy looking at data on paper instead of what’s in front of us.’ Instead, ‘all the vibrations’ were right for a Romney victory, she wrote.”)

Least Surprising Personal Detail Revealed by Silver: “The books in my office — I have about 500 — are arranged by color.”

Number of Total Stories at Launch:

Top 5 Most Clickable Headlines for a General Audience:
“The Quest to Count City-Dwelling Rats”
“Toilet Seat Covers: To Use or Not to Use”
“Sex, Drugs And Guns: America’s Underground Economies”
“British Teeth Aren’t That Bad (American Teeth Are Far Worse)”
“Holy $&*#! The Pope And Accidental Cursing”

Top 5 Least Clickable Headlines for a General Audience:
“Reviewing the Peer-Review Process”
“The Most Underreported Piece of Obama’s Budget”
“The Smell of Data in the Morning”
“Finally, a Formula For Decoding Health News”
“What Is Driving Growth in Government Spending?”

Best Interactive Graphic: NCAA Tournament Predictions, a forecasting model that calculates the chance of each team advancing to each round.

Least Believable Headline, Anecdotally: “This Winter Wasn’t the Coldest, But It Was One of the Most Miserable”

Best Bio Omission: Silver, who leaves out his three years at the New York Times, which did not end on the best terms.

Least Necessary Use of Stats: “Parsing Is Such Sweet Sorrow”

Five hundred years after Shakespeare wrote it, we can now say that “Romeo and Juliet” has the wrong name. Perhaps the play should be called “Juliet and Her Nurse,” which isn’t nearly as sexy, or “Romeo and Benvolio,” which has a whole different connotation.

I discovered this by writing a computer program to count how many lines each pair of characters in “Romeo and Juliet” spoke to each other … I wanted Romeo and Juliet to end up together — if they couldn’t in the play, at least they could in my analysis — but the math paid no heed to my desires.

Welcome to the world, nerds! 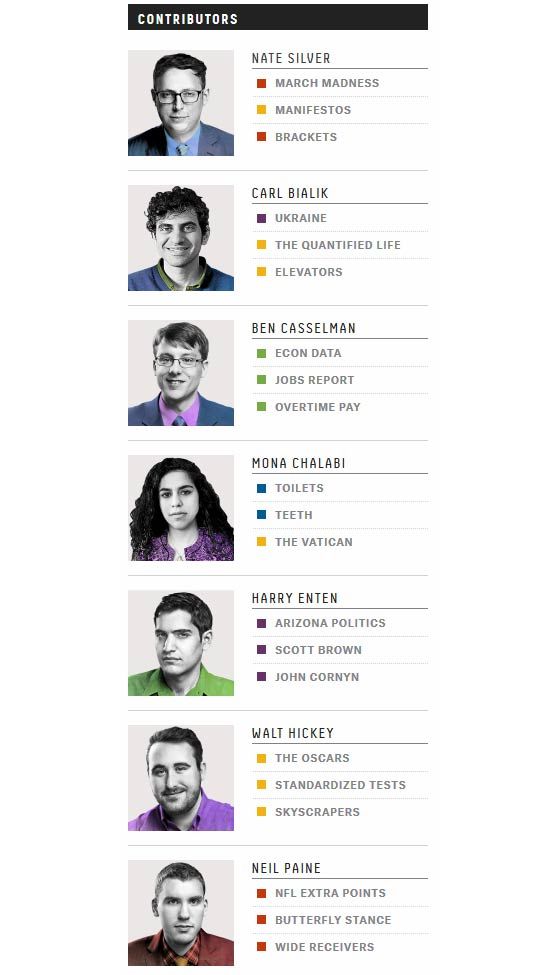