President Obama, trying desperately to reach America’s young people ahead of the March 31 Affordable Care Act deadline, has had a busy week, appearing on Between Two Ferns, exploding his fist bumps, shopping at the Gap, and granting interviews to Ryan Seacrest. But he’ll never shake his fatherly vibes. On the radio today, the president fought back against critics of his fashion sense, insisting his family “thought for a dad, I displayed reasonably good taste” during his midtown retail excursion, in which he bought cardigans for Michelle and the girls.

As for his own wardrobe, “I’ve been unfairly maligned about my jeans,” Obama told Seacrest. That’s not quite true, as a quick look back proves — he’s been pretty fairly maligned.

“The truth is, generally I look very sharp in jeans,” said the president this morning. “There was one episode like four years ago in which I was wearing some loose jeans mainly because I was out on the pitcher’s mound and I didn’t want to feel confined while I was pitching, and I think I’ve paid my penance for that. I got whacked pretty good. Since that time, my jeans fit very well.”

But the historical record shows less of a progression than an inconsistent assortment of disappointing denim. None, in our estimation, look especially “sharp.” And that’s okay! Presumably he has more important things to worry about, but then there’s no need to be defensive.

At an earlier first pitch, in 2005, Obama went reasonably slim and a tad dark:

And here’s the offending pair he mentioned, from 2009:

More than dad jeans, even — those are mom jeans, light in wash and spacious in the butt.

“I’m a little frumpy,” he admitted afterward. “Those jeans are comfortable, and for those of you who want your president to look great in his tight jeans, I’m sorry — I’m not the guy.”

Unfortunately, it wasn’t just to leave room for his wind-up motion. In a non-sporty context, Obama still prefered a looser fit and questionable wash. Also from 2009:

And then there are the outliers, like this snugger, lighter pair from the same year (it could just be the angle):

In 2010, things got really bad, with added mandals. How’s the leader of the free world rocking sandals with jeans?

But back to baggy and sandals in January of 2013:

Late last year, he did improve a bit, pairing a dark wash with the old tuck-and-belt:

And here he is in December, looking downright Dad Respectable:

In all, the looks, if not sharp, are age appropriate. He is a 52-year-old man who mostly wears suits and should probably not be wearing skinnier pants anyway, for the good of the nation and his circulation. Not to metion, for someone of his stature, even the worst jeans are better than the indignity of shorts. 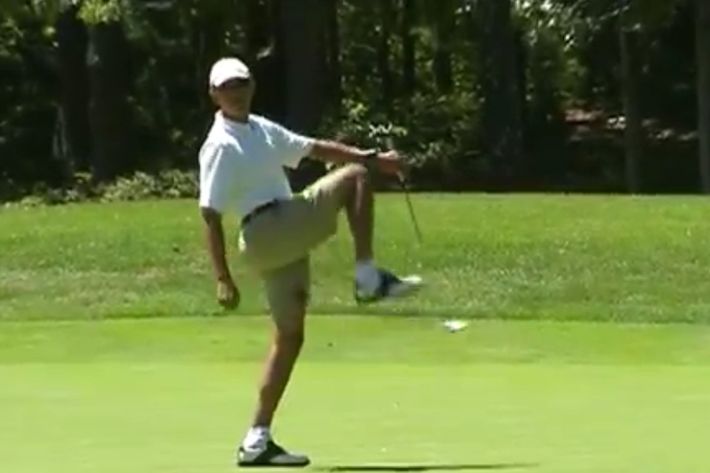 THE FEED
11 mins ago
the national interest
the national interest
What Is Really Unprecedented Is Trump’s Criminality
By Jonathan Chait
Republicans are angry at the FBI, but they choose to yoke themselves to a flagrant crook.
12:37 p.m.
early and often
early and often
Republicans Go to the Mattresses to Defend Trump From the Feds
By Ed Kilgore
The gestures of loyalty to Trump and fury at law enforcement by leading Republicans with no idea of the raid’s purpose or findings are revealing.
11:49 a.m.
goat
goat
Serena Williams Announces Her Retirement From Tennis
By Claire Lampen
In a Vogue essay, she says she plans to step away from the sport after the U.S. Open wraps next month.

11:22 a.m.
what we know
what we know
Trump Says the FBI Raided Mar-a-Lago and Broke Into His Safe
By Intelligencer Staff
Federal agents were searching for evidence that Trump has classified information that he took home from the White House.
10:00 a.m.
the city politic
the city politic
Yuh-Line Niou on Her Especially Personal Run for Congress
By Nia Prater
From representation to disability policy, she says there’s a common theme: Courage.
9:30 a.m.
games
games
The Mets Are Having an Extremely Un-Mets Season
By Will Leitch
They’re overachieving their way to the playoffs — and having a great time doing it.
9:00 a.m.
what is elon musk?
what is elon musk?
Musk and Trump and a Little Steve Jobs
By Chris Lee
The characterological origins of Tony Stark.
8:00 a.m.
what is elon musk?
what is elon musk?
Elon’s Biggest Boondoggle
By Alissa Walker
Why did the world’s richest man spend the past five years trying to sell cities a hole in the ground?
6:05 a.m.
the power trip
the power trip
What’s in Trump’s Safe the FBI Raided?
By Olivia Nuzzi
Former aides consider the contents of the vault at Mar-a-Lago.
8/8/2022
unsolved mysteries
unsolved mysteries
The Bodies Keep Piling Up at Lake Mead
By Chas Danner
Four sets of human remains have now been discovered in the rapidly receding reservoir since May.
8/8/2022
early and often
early and often
Will Democrats’ Sudden Legislative Success Matter in the Midterms?
By Ed Kilgore
With the passage of the Inflation Reduction Act and gas prices dropping, Democrats’ odds of success in November’s elections are looking up.
8/8/2022
early and often
early and often
Photos of Trump Notes in Toilet Were Better Left to the Imagination
By Margaret Hartmann
Reporters were so preoccupied with whether they could find these pictures that they didn’t stop to think if they should.
8/8/2022
crime
crime
Police Have a Lead in Killings of Muslim Men in Albuquerque
By Benjamin Hart
At least three Muslim immigrants have been ambushed and killed in recent weeks, terrifying the local community.
8/8/2022
early and often
early and often
The GOP Is the Party of Insulin-Gouging
By Ross Barkan
In their quest for zero-sum victories — and Democratic defeats — Republicans are incapable of tackling popular issues that would benefit them.
8/8/2022
the city politic
the city politic
Carlina Rivera on What Democrats Get Wrong About Latino Voters
By Nia Prater
A daughter of the Lower East Side runs to represent the district where she grew up.
8/8/2022
early and often
early and often
Senate Democrats Finally Get Their Big Climate, Health Care, and Tax Bill Done
By Chas Danner
An overview of what’s in the Inflation Reduction Act and what last-minute changes were made.
8/8/2022
2022 midterms
2022 midterms
The GOP’s Glut of Rookie Candidates Could Mean Lots of Costly Mistakes
By Ed Kilgore
Experience in politics isn’t everything. But the GOP’s unusually large number of first-time candidates could mean midterms trouble down the road.
8/8/2022
early and often
early and often
The Biden Age Is Hitting Its Stride
By Errol Louis
The debate over how old the president is and whether he should run again is a distraction from how much he has already accomplished.
8/8/2022
what is elon musk?
what is elon musk?
What Is Elon Musk?
By Lane Brown
And how is it possible that he could emerge from his Twitter debacle more culturally dominant than ever?
8/7/2022
plagued
plagued
What Is Going on With America’s COVID Booster Plan?
By Chas Danner
The Biden administration wants to reboot the U.S. booster drive with reformulated vaccines this fall. Here’s what we know.
8/7/2022
early and often
early and often
Arizona Has Become a Paradise for Election Deniers
By Ed Kilgore
Promoters of Trump’s election fables swept four major statewide Republican primaries. The GOP could pay a price in November.
8/7/2022
early and often
early and often
All the Juicy Gossip From Jared Kushner’s Book
By Margaret Hartmann
Breaking History, the forthcoming memoir from the former First Son-in-Law/top Trump adviser, is brimming with dirt, jabs, and score settling.
8/5/2022
conspiracist series
conspiracist series
Sandy Hook Parents Awarded Another $45 Million of Alex Jones’s Money
By Matt Stieb
The Infowars founder has had an expensive week in court, and there are still two more trials to go against other Sandy Hook victims’ families.
8/5/2022
early and often
early and often
The Drama-Lover’s Guide to the New Trump Books
By Margaret Hartmann
Love gossip but not enough to actually read the new batch of Trump books? Here are all the juicy, disturbing, and darkly amusing tidbits you missed.
8/5/2022
the money game
the money game
Elon Musk Is ‘Sick of Stuff Like This’: 8 Takeaways to His Response to Twitter
By Kevin T. Dugan
The Tesla CEO has presented his response trying to get out of buying the company, but more questions linger over his chances of success.