A tragically large number of left-wing Westerners in the 20th century deluded themselves about the horrors of Soviet communism. As awful and unforgivable as it was, the process by which they made themselves into dupes was at least explicable: They loved socialism, and one country in the world was implementing socialism, so they persuaded themselves, and for a while, it was working.

Today’s Russia dupes are a smaller, more pathetic lot. Above all they are just plain weirder, because they lack a clear ideological motive for their stoogery. Soviet Russia not only commanded a vast propaganda network, but embodied a doctrine with international appeal (and which had originated outside of Russia). Vladimir Putin’s Russia follows no model except Russian nationalism. To the extent it employs a non-nationalist philosophy, its main idea is that gays have weakened Europe. And yet the dupes still come.

The most prominent intellectual apologist for Putin is Stephen F. Cohen, Princeton professor, Russologist for the left-wing Nation. Cohen is a septuagenarian, old-school leftist who has carried on the mental habits of decades of anti-anti-communism seamlessly into a new career of anti-anti-Putinism. The Cohen method is to pick away at every indictment of the Russian regime without directly associating himself with its various atrocities. Is Putin persecuting gays? Well, Cohen wants us to know that various Ukrainians nationalists dislike gays, too. And also Barack Obama’s claim to snub Sochi because of gay rights is probably not on the level. Is Putin bullying and killing journalists? Eh, says Cohen, “Every time a journalist breaks a leg, they say the Kremlin did it.” Accidents happen.

The primary hub of Russian propaganda in the West is Russia Today, an English-language Kremlin-funded propaganda outlet. Joe Pompeo reported last fall how RT has actually acquired a devoted following in the West, in part through relentless viral YouTube sharing of its reports. Cohen, of course, appears regularly on RT. (Is RT biased? Well, he says, so is CNN: “I’m highly suspicious about the narrative I’m getting on CNN. It seems to be the flip side of RT.”) 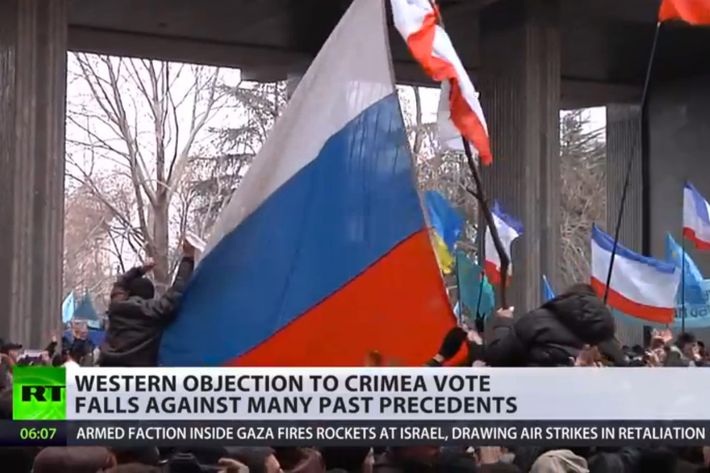 Here is another small, sad case of a prospective Russia dupe. Jamie Kirchick, a hawkish American reporter and activist who surprised RT by protesting Russia’s treatment of gays on air, later helped coordinate the on-air resignation of RT’s Liz Wahl. In response, Kevin Gosztola, a writer for the left-wing site FireDogLake, called Kirchick and threatened to expose him for a story Gosztola hoped would run in First Look Media, Glenn Greenwald’s new media organization. (First Look denied having commissioned the story.) Gosztola was a man inflamed with anger that a journalist would make Russia look bad. In a message on Kirchick’s phone, he sputtered, “And, you know, you like to ‘fuck with the Russians’ and we’re going to respond to that and let people know where you’re coming from as you have worked with Liz Wahl to expose what you call a propaganda network.” Gosztola was brimming with indignation at the not-very-mysterious motives of a journalist exposing RT as a Russian-propaganda network, and not at all upset about the underlying fact that RT is a Russian-propaganda network.

Rosie Gray has a deeply reported piece on the cadre of young American journalists. Their motives appear to be a mix of careerism, naïveté, and utter incuriousity. The modal career arc of an American RT reporter appears to be an ambitious but not terribly bright 20-something aspiring journalist who, faced with the alternative of grim local-news reportage, leaps at the chance to make two or three times the pay while covering world affairs, sort of. It’s the sort of reward that dims one’s incentive to perform due diligence into just who is signing your paycheck, and why. “I saw a job posting,” a former RT America reporter tells Gray, “and figured why not,” in one of the more hilarious uses of “why not” you will ever see. (I’ll launch my journalism career by being a mouthpiece for an authoritarian regime. What could go wrong?)

But the central appeal of RT is to leftists, libertarians, conspiracy theorists, and other marginalized groups. The main thematic work of RT is to paint the West in the worst possible light, as decadent, corrupt, and failing – the Cohen method of defense-by-implication. RT’s deep coverage of the Occupy protests and harsh coverage of American politics and life in general offers a platform to critics who are denied respectful treatment in the U.S. media. They are bound, above all, by a desire to get on television.

The demise of communism has left a void in the place where socialist fervor once animated the Soviet dupes. In the absence of any positive motivating force, Putin’s Russia, which has positioned itself as America’s main rival, has sponged up whatever motley collection of outsiders it can find. Russia is not the vessel for their ideological fantasies, but merely a placeholder for their accumulated discontent.