“Are we in a bubble?” is the evergreen topic of tech punditry – the equivalent of the political commentariat’s nonstop speculation about whether Hillary Clinton will run in 2016. Tech writers theorize about bubbles for lots of reasons: because they’re bored, because it gets clicks, because they’re annoyed by Silicon Valley hubris, because they remember 1999, because they see stamping out hype as being in the public interest, and because they want to be seen as prescient if a bubble does pop.

With all this speculating, it can be a little hard to remember what the actual arguments are. So here is a refresher, for help in formulating your very own opinion on today’s tech bubble or lack thereof.

Yes, This Is a Tech Bubble

Why they’re so certain: I mean, look around. Money-losing start-ups are going public at billion-dollar valuations. Apps with no revenue are turning down outrageous buyout offers, and stock prices are outpacing earnings by the biggest amount since 1999. Harvard MBAs are flocking to Silicon Valley. Venture capitalists are chasing Bitcoin start-ups and throwing money at their local coffee shops. Companies are using meaningless “vanity metrics” to prop up their numbers. For God’s sake, Candy Crush held an IPO. Is this an image of a stable, rational tech sector?

What could prove them wrong: Nothing, basically. If a bubble fails to pop this year, they’ll simply push their projections back to next year. Each new billion-dollar IPO will serve as proof of a further inflating of the bubble, and the doomsaying will only grow louder. The fun thing about forecasting market crashes is that it will always come true eventually.

Most-cited chart: This one, of the tech-heavy NASDAQ index, which shows that stocks are nearly back to their 2000 levels.

No, This Isn’t a Tech Bubble

Why they’re so certain: Sure, there’s some silliness in Silicon Valley right now. But if you look under the hood, the fundamentals of the tech sector are much stronger than they were in 1999. Companies are more mature, many have robust revenue streams, and the ones that don’t have tons and tons of users. Three billion people are connected to the internet now – about ten times as many as in 1999 – and that means the overall pie available for tech companies is much, much bigger. What we’re seeing now isn’t a temporary explosion in dot-coms – it’s the fundamental realignment of the global economy, and the dawn of a new information age that will see old-line incumbents replaced by tech disrupters in every industry in the world.

Moreover, thanks to regulations that have narrowed the IPO pipeline, fewer of today’s tech companies are publicly traded than in 1999, meaning that even if there is a bubble and it does pop, the losses will mostly be contained to the Silicon Valley investor class, and won’t spread to the general public like they did the last time. In other words, there is no Pets.com phenomenon this time around.

And Candy Crush? Candy Crush is profitable. That’s a lot more than you can say about Twitter.

What could prove them wrong: A bubble pop, or, at least, the collapse of one or more giant technology companies (Facebook, Google, Apple) that would lead to the failures of others.

Most-cited chart: This one (via Quartz), which shows that the number of tech companies going public is still much smaller today than it was at the height of the first dot-com boom. 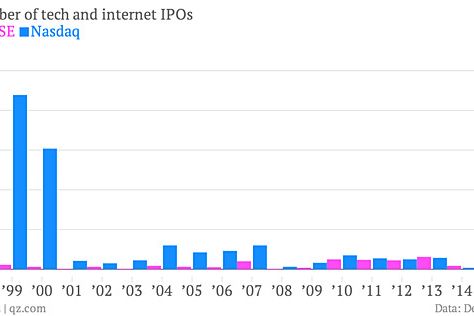 Is anyone in the middle?

Yes. A growing number of people think that while some private tech valuations may be out of line with reality, the overall industry rests on much firmer ground than it did in 1999, and the underlying causes of the boom are different this time around. The Wall Street Journal, among others, has taken this view, and it’s probably the right one.

But what fun is nuance? Rock-solid certainty is the oxygen of the bubble-speculation ecosystem. So read up, form your own binary opinion, and get to doomsaying or cheerleading, as you see fit.

THE FEED
23 mins ago
just asking questions
just asking questions
What Fresh Hell Is the New Bird-Flu Outbreak?
By Benjamin Hart
Epidemiologist Katelyn Jetelina on how to think about the virus’s recent worrying trajectory.
10:55 a.m.
poll position
poll position
Biden Is Trump (When It Comes to Popularity)
By Ed Kilgore
Biden hopes tonight’s State of the Union address will sway voters, but there’s growing evidence that opinions of any president are hard to move.
10:29 a.m.
early and often
early and often
Trump Wants to Divide Republicans and Conquer DeSantis
By Ed Kilgore
Nikki Haley is no threat to Trump, who would prefer a large field to muddy the track in his real primary race against Florida‘s governor.

9:12 a.m.
what we know
what we know
Horrifying Scenes of Quake Damage From Turkey, Syria Emerge
By Chas Danner
The powerful earthquakes have flattened thousands of buildings in the region, and the death toll continues to mount.
9:00 a.m.
foreign interests
foreign interests
Trump Is Too Tough on Balloons to Be Antiwar
By Eric Levitz
The ex-president is simultaneously slamming Biden for insufficient toughness on China and casting himself as a peace candidate.
8:00 a.m.
the city politic
the city politic
Are Eric Adams’s Big Plans for the City Still Too Small?
By Errol Louis
As he enters his second year in office, Adams is sticking with his grind-it-out approach to governing.
2/6/2023
what we know
what we know
U.S. Recovery of Alleged Spy Balloon Continues: Updates
By Chas Danner
China claimed on Monday that a second similar balloon seen over Latin America last week was also just a wayward civilian craft.
2/6/2023
tremendous content
tremendous content
Don Jr. Is Ready to Laugh About the ‘Trump Baby’ Balloon
By Margaret Hartmann
While the Chinese spy balloon is no more, its cranky little brother is getting pampered by the Museum of London, giving Trump’s son a chuckle.
2/6/2023
substation attacks
substation attacks
A Pair of Nazis Allegedly Wanted to Blow Up the Baltimore Grid
By Matt Stieb
The alleged plot is part of a surge in far-right extremists looking to take out the electrical grid.
2/6/2023
ftx fallout
ftx fallout
FTX Even Had a Woo-Woo Life Coach
By Matt Stieb
Sam Bankman-Fried hired his own psychiatrist to coach staffers about “happiness” and to encourage them to go on dates.
2/6/2023
the talented mr. santos
the talented mr. santos
Here’s Every Single Lie Told by George Santos
By Matt Stieb
Navigating the many exaggerations and falsehoods of New York’s newest representative.
2/6/2023
the national interest
the national interest
Michael Lind, Case Study in the Perils of Discourse-Poisoning
By Jonathan Chait
How an intellectual talks himself into believing the GOP is the left-wing party.
2/6/2023
just asking questions
just asking questions
Should a 13-Year-Old Have Bariatric Surgery?
By Benjamin Hart
Sandra Hassink on what the new pediatric obesity guidelines she co-wrote do and don’t say.
2/6/2023
the economy
the economy
America’s Labor Shortages Are Good, Actually
By Eric Levitz
The upside of longer lines and faltering customer service.
2/5/2023
early and often
early and often
Has Pete Buttigieg’s Dream Job Turned Into a Nightmare?
By Ed Kilgore
It turns out Transportation secretary won’t be a quick and easy layover on the way to higher office for Mayor Pete.
2/4/2023
early and often
early and often
The Democrat Who Could Take Down Kyrsten Sinema
By Ben Jacobs
Ruben Gallego will try to fulfill the left’s dreams by challenging Arizona’s newly independent U.S. senator.
2/3/2023
early and often
early and often
House Republicans’ Assault-Weapon Pins Aren’t Just a Taunt
By Ed Kilgore
Owning the libs may be an added bonus, but Second Amendment absolutists clearly intend them as a threat against those who challenge gun rights.
2/3/2023
creature capers
creature capers
The Hunt Is on to Find the Dallas Zoo Bandit
By Matt Stieb
A suspect was arrested after police received a tip that the alleged bandit was visiting the aquarium.
2/3/2023
just asking questions
just asking questions
What Could a Chinese Spy Balloon Over the U.S. Do, Exactly?
By Matt Stieb
Arms-control expert Jeffrey Lewis examines whether the Chinese spy ship over the West is an accident or a geopolitical middle finger.
2/3/2023
poll position
poll position
Trump’s Lead in 2024 Polls May Be Thinner Than We Thought
By Ed Kilgore
The ex-president looks weaker against Ron DeSantis and other likely Republican rivals in the polls that were most reliable last year.
2/3/2023
tremendous content
tremendous content
Trump Knows How to End Ukraine War ‘Immediately,’ But It’s a Secret
By Margaret Hartmann
Trump revealed there’s something he could say that would “guarantee” that the fighting ends now. Sadly, he won’t tell unless we reelect him.
2/3/2023
horrible bosses
horrible bosses
Working for George Santos Is As Crazy As It Sounds
By Matt Stieb
A former aide recorded his conversation with the congressman as he was getting fired. Santos wasn’t all that nice about it.
2/3/2023
crime
crime
New Jersey Councilwoman Shot and Killed Outside Her Home
By Nia Prater
Eunice Dwumfour, a 30-year-old member of the Sayreville Borough Council, was found shot dead on Wednesday night.
2/3/2023
the economy
the economy
The Fed Can Stop Choking the Economy Now
By Eric Levitz
The statistical and moral case for easing up on the interest-rate hikes.
2/3/2023
2024 presidential election
2024 presidential election
What on Earth Are These 2024 Long Shots Thinking?
By Ed Kilgore
It’s not inconceivable that someone like Nikki Haley could become a contender. But don’t count out sheer ego as motivation.