If you want to be happier at work, quit your big-bank job and work at a hedge fund, preferably one that will pay you more than $1 million a year.

Easy, right? Maybe not, but that’s the conclusion of a new study by Wall Street recruiting firm Options Group, which surveyed roughly 1,000 workers in finance and technology and found a high correlation between working at smaller, less-regulated firms and job satisfaction.

The study, from which preliminary results were provided exclusively to Intelligencer, allows us to peer inside the psyches of those working inside the world’s biggest banks, hedge funds, and private-equity firms, as well as tech firms like Google and IBM. Their answers tell a familiar story: Among financial and tech workers, compensation matters most, upward mobility is important, and the greatest satisfaction is found among those making the most money. The crash of 2008 resulted in lower pay and more rules for bankers, and made jobs on the buy side (private equity and hedge funds, which generally pay more and are more loosely regulated) look more attractive.

But there are some surprising findings, too. In particular, look at how survey respondents answered a question about their own job satisfaction. Those coddled, enthusiastic tech workers? Turns out they’re about as happy in their jobs as bankers. 48 percent of tech workers said they agreed with the statement I am satisfied with my job, compared to 45 percent at banks and private-equity firms. The happiest group was hedge-fund workers, 62 percent of whom were satisfied in their seats. 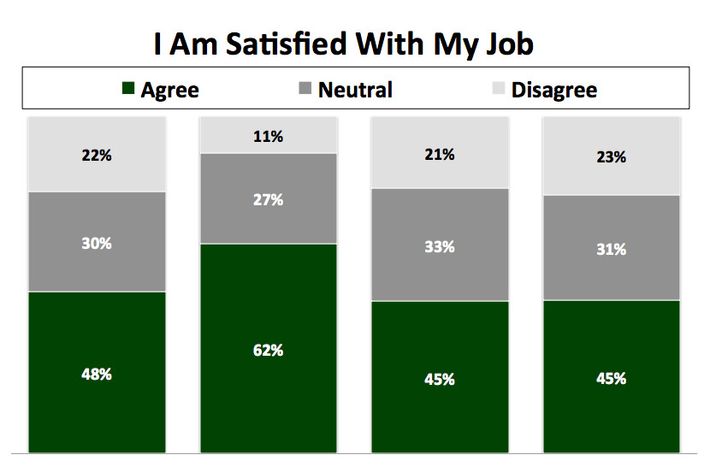 Accordingly, fewer hedge-fund workers are looking to leave their jobs – just 32 percent, compared to half of bankers. 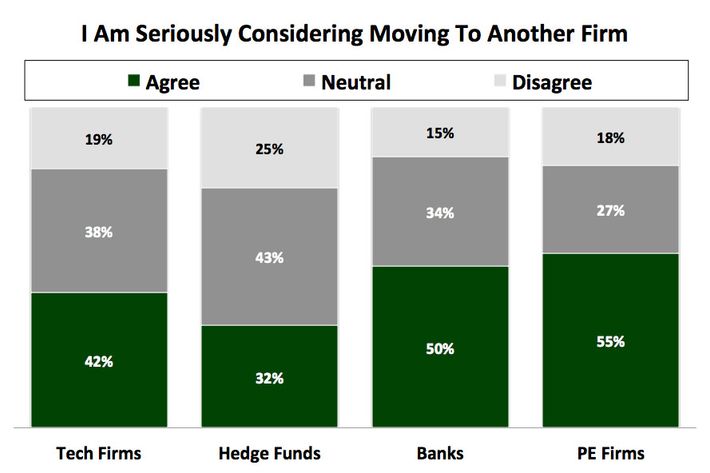 In general, people in tech are paid less than people in finance, but they seem happier with the amounts they get. 42 percent of tech workers agreed with the statement I was compensated fairly for 2013, compared with just 22 and 23 percent at banks and private-equity firms, respectively. 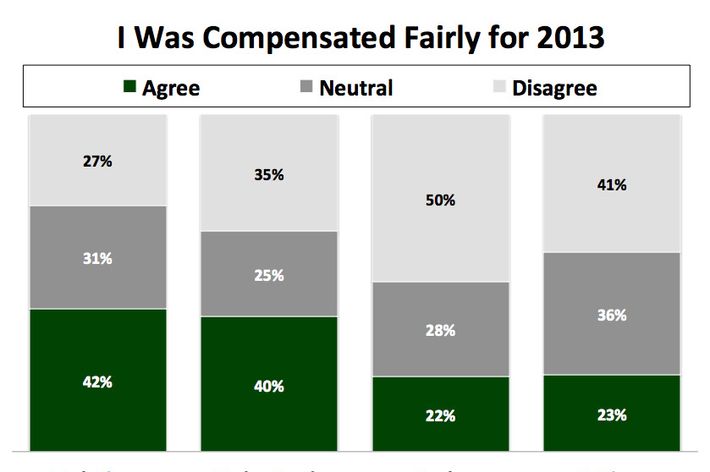 The biggest determinant of satisfaction among these workers, though, was money. Slice the survey data another way, and it becomes clear that no matter where they work, respondents who were paid more than $1 million a year reported being substantially more satisfied with their jobs and compensation (surprise!) than workers being paid less than $100,000 a year. 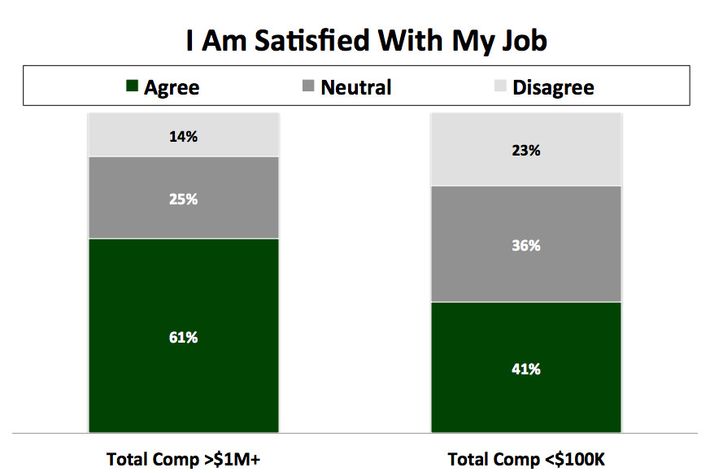 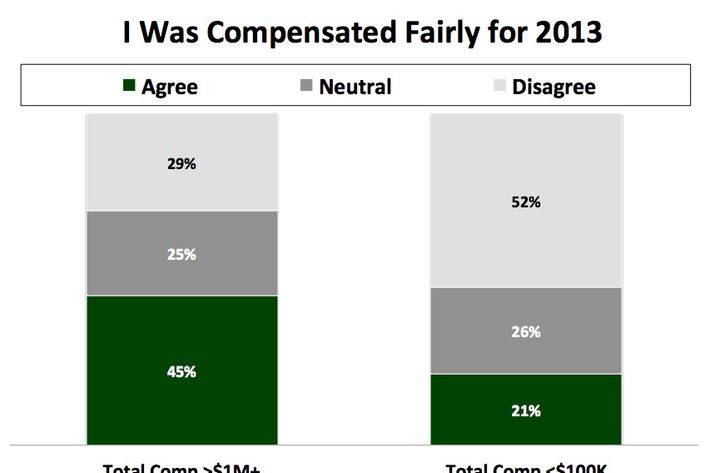 Looking at these charts, it’s clear that the one percent has its own one percent, and that the .01 percent feel like winners relative to their own peers who are making less for similar work.

It’s also clear that the “hedonic treadmill,” a social-psychology phenomenon in which desires rise relative to incomes, applies to people on Wall Street and in tech. Nearly everyone working in finance or tech is rich, objectively speaking, with incomes that put them in the top 5 or 10 percent of all earners nationwide. But there’s always a reason to feel poor – the guy in the next seat is making five times more than you, the woman you used to work with who went to a hedge fund gets better perks and a bigger bonus now. This is the stuff golden handcuffs are made of – the feeling that, if you could just stick around for a few more years, make a little more money in your cushy finance or tech job, the happiness boost would be worth the grind.

There are some humanizing details among the data in Options Group’s survey. Namely, when you dig into the details, it turns out that a lot of high-earning finance and tech workers want the same things from their jobs as the rest of us – upward mobility, good benefits, weekends off. (Granted, some of their needs are more exotic – among the replies to a survey question about desired benefits were “country club membership,” “martini Fridays,” and “first-class air travel.”) Mostly, the data still seem to be confirming that despite recovering bonus levels, bankers and other Wall Street workers still aren’t altogether happy.

It turns out that there might be some truth to the upward ambitions of young Wall Streeters – since working at a hedge fund does increase job satisfaction, and since hedge-fund workers are generally hired from banks and private-equity firms, it may make sense to keep toiling away in the hopes of a buy-side promotion. Still, it doesn’t sound like a fun row to hoe.

“I wish my firm would stop sucking,” wrote one U.S. banker on the survey, in response to a question about which extra benefits were most desirable. “It’s a miserable place to work.”

+Comments Leave a Comment
To Be Happy, Work at a Hedge Fund

THE FEED
12:33 a.m.
trump taxes
trump taxes
Criminal Investigation Into Trump Org Aimed at ‘Flipping’ Longtime CFO: Report
By Matt Stieb
The ex-president who speaks like a mob boss is reportedly being investigated like one.
3/3/2021
qanon
qanon
House Cancels Thursday Session After Warning of ‘Possible’ Militia Attack
By Matt Stieb
After Capitol Police told lawmakers of a potential attack on the complex by Trump supporters, the House wrapped up a Thursday vote on Wednesday night.
3/3/2021
coronavirus
coronavirus
Can Businesses Require Masks After States Lift Their Mandates?
By Matt Stieb
The end of most pandemic restrictions in Texas and Mississippi predict the challenges all states will face as reopening occurs this year.

3/3/2021
stimulus checks
stimulus checks
Will We Get a Third Round of Stimulus Checks?
By Ed Kilgore
The House has already approved Biden’s plan, which includes the third checks. If all goes well, the president should sign the bill by March 14.
3/3/2021
politics
politics
Will Trump Dump Pence If He Runs in 2024?
By Ed Kilgore
There are reports Trump won’t forgive Pence his one moment of independence. A fresh start could also give us the spectacle of a Trump-Trump ticket.
3/3/2021
Ronny Jackson Harassed Staff, Drank on Duty As White House Doctor, Report Finds
By Nia Prater
Jackson, who is now a Republican congressman, denied the scathing findings in the Pentagon inspector general’s report.
3/3/2021
the coronavirus
the coronavirus
Smaller New York Performance Spaces Allowed to Open at Limited Capacity
By Jackson McHenry
Venues would max out at 100 people indoors or 200 outdoors.
3/3/2021
stimulus checks
stimulus checks
Moderate Democrats Strip Stimulus Checks From 12 Million Voters for No Reason
By Eric Levitz
By narrowing eligibility for COVID relief payments, Senate Democrats will save a negligible amount of money at a high political cost.
3/3/2021
the national interest
the national interest
I Read Mike Pence’s Blueprint for Permanent Authoritarian Rule
By Jonathan Chait
Change the voting rules so mobs aren’t needed again.
3/3/2021
politics
politics
Cuomo Says He’s ‘Embarrassed’ About Sexual-Harassment Claims, But Won’t Resign
By Nia Prater
The governor apologized again for making people “feel uncomfortable” but insisted he “never touched anyone inappropriately.”
3/3/2021
the republican party
the republican party
The GOP’s Establishment Is More Populist Than Its Trumpists
By Eric Levitz
House Republicans are more staunchly pro-Trump — and anti-minimum-wage hikes – than Mitch McConnell is.
3/3/2021

The head of the D.C. National Guard testified that if not for “unusual” Pentagon restrictions on January 6, he could have had 150 soldiers at the Capitol in 20 minutes

The commanding general of the D.C. National Guard told lawmakers Wednesday how restrictions the Pentagon placed on him in the run-up to the Capitol riot prevented him from more quickly sending forces to help quell the violence.

Maj. Gen. William J. Walker said he did not receive approval to change the D.C. Guard’s mission and send his forces to the Capitol on Jan. 6 until three hours and 19 minutes after he first received an emotional call from the Capitol Police chief requesting urgent backup.

Walker described the Pentagon’s restrictions as “unusual,” noting that he did not have such limitations last summer, when the D.C. Guard was tasked with responding to local racial-justice protests after the killing of George Floyd.

D.C. Guard chief says ‘unusual’ restrictions slowed deployment of backup during Capitol riot
—WaPo
3/3/2021
politics
politics
Will Democrats Act Like the Party of Voting Rights or Not?
By Ed Kilgore
The conservative Supreme Court and GOP are set to do even more damage unless they’re stopped.
3/3/2021
the jab
the jab
The Vaccine Selfie: Encouraged at Javits, Tolerated at Medgar Evers
By Willy Blackmore
Don’t let the ‘no photography allowed’ signs confuse you.
3/3/2021
the national interest
the national interest
Zero COVID Risk Is the Wrong Standard
By Jonathan Chait
The fallacy of complete safety.
3/3/2021

How Capitol Police are preparing for Trump’s fake inauguration day

The United States Capitol Police said it has beefed up security on Capitol Hill this week due to “concerning information and intelligence” related to March 4, the date that far-right conspiracy theorists believe former President Donald Trump will return to power.

US Capitol Police beef up security for March 4 amid concerns over QAnon conspiracy theory
—ABC News
3/3/2021
the group portrait
the group portrait
Working Wave After Wave at Elmhurst Hospital
By Anna Silman
Approaching 365 days in the early epicenter of the pandemic.
3/3/2021
2020 hindsight
2020 hindsight
David Shor on Why Trump Was Good for the GOP — and How Dems Can Win in 2022
By Eric Levitz
The data scientist shares his latest theories on why Democrats lost Hispanic support in 2020 and what the party must do to avoid disaster in 2022.
3/2/2021
politics
politics
Biden to Pull Neera Tanden’s Nomination
By Ed Kilgore
Undone by mean tweets.
3/2/2021
jailbreak
jailbreak
Americans Who Masterminded Carlos Ghosn’s Escape Now in Japanese Custody
By Eve Peyser
U.S. special forces veteran and his son spirited the ex-Nissan CEO out of Tokyo while he was awaiting trial.
3/2/2021
covid-19
covid-19
The U.S. Vaccination Effort Is Speeding Up — Fast
By Paola Rosa-Aquino
Supplies are booming, and the number of shots in arms is skyrocketing.
3/2/2021
obits
obits
From Fighting Racism to Playing the Power Game, Vernon Jordan Was Hard to Beat
By Ed Kilgore
He was the living link between the civil-rights movement and political and corporate elites for decades.
3/2/2021
scandals
scandals
Everyone Who Has Called for Governor Cuomo to Resign
By Nia Prater
As the scandal over COVID policies is compounded by harassment allegations, a growing number of elected officials say he must resign or be impeached.
3/2/2021
the national interest
the national interest
Mitt Romney’s Former Aide Thinks He’s Gone Soft on the Poor
By Jonathan Chait
We handle problems all the time without dealing with their root causes.
3/2/2021
downfalls
downfalls
Cuomo’s Biggest Political Problem? ‘Everybody Hates Him.’
By David Freedlander
Even the governor’s allies concede that — with his political life in the balance — his usual tricks and tactics aren’t working.
3/2/2021
minimum wage increase
minimum wage increase
Democrats Courted Fight for $15. The Movement Wants Them to Deliver.
By Sarah Jones
“Stop trying to play nicey-nice in the sandbox.”
3/2/2021

Vernon E. Jordan Jr. never held elective office, was never a member of the Cabinet and never even worked for the federal government. He was a lawyer who rarely appeared in court, a corporate kingmaker who was not a registered lobbyist, a political strategist who did not direct a campaign.

Yet Mr. Jordan was, for years, one of the most influential figures in Washington. With a commanding presence, personal charm and an inviolable sense of discretion, he had a rare combination of talents that made him the confidant of presidents, congressional leaders, business executives and civil rights figures.

Mr. Jordan was the consummate Washington power broker, reaching the peak of his quiet authority during the 1990s, when he was, with the possible exception of Hillary Clinton, President Bill Clinton’s closest adviser. He had Clinton’s ear through two terms as president, including the most challenging moments, when Clinton faced an investigation and impeachment for a relationship with a White House intern.

“The last thing he’d ever do is betray a friendship,” Clinton said in 1996. “It’s good to have a friend like that.”

Mr. Jordan died March 1 at his home in Washington. He was 85. The death was confirmed by his daughter, Vickee Jordan. She declined to state the cause.