CNN’s coverage of Malaysia Airlines Flight 370 has reached such astounding stupidity in the past five weeks that it accomplished something previously unimaginable: uniting Bill O’Reilly and Rachel Maddow on the same side of an issue. Both cable news hosts think their counterparts at CNN should shut up about the missing plane — not that Jeff Zucker cares. CNN’s ratings are through the roof, and if it takes blind speculation or goofy props to maintain those numbers, then — dammit! — that’s what viewers will get. It’s been 39 days since Flight 370 disappeared, and we still know little about what happened, but CNN keeps talking, and in doing so, embarrassing itself. Here are the network’s worst moments:

The “Supernatural” Hypothesis: More than any other anchor, Don Lemon has turned himself into a punchline during CNN’s incessant Flight 370 coverage (Wolf Blitzer was already there). Lemon’s first worst moment came nine days after the plane disappeared, when he “just put it out there” that maybe something “supernatural” happened.

The Black Hole Hypothesis: A few days later, Lemon showed that he hadn’t learned his lesson by asking a former U.S. Department of Transportation inspector general if a black hole might have sucked the plane out of the sky.

Not a Plane, a Simulator: In late March, the network tried like hell to rent a real Boeing-777 to supplement its coverage. It failed and settled for a flight simulator in Canada that it’s desperately hoarding to keep other networks away. 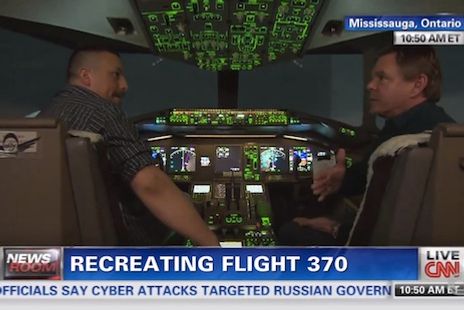 The Toy: CNN’s attempt to produce an actual Boeing seems a lot less ridiculous when you see how silly Don Lemon looks playing with a toy plane at his desk. 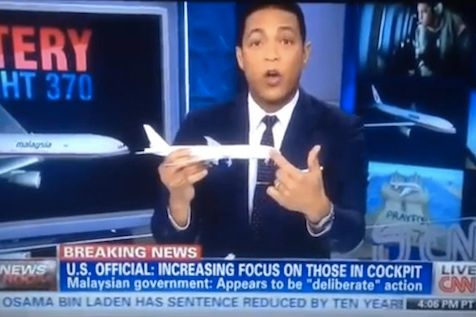 The Countdown Clock: At one point, CNN presented this countdown clock showing that only 17 days remained until the plane’s black-box battery died, making its recovery nearly impossible. Ignoring the New Year’s-ification of a human tragedy, it was impossible to know the precise time at which the battery would die. The clock was nonsense.

Trash Talk: In his second bit bashing CNN for blathering about Flight 370, Jon Stewart gathered together a dozen or so examples of talking heads speculating about stuff floating in the ocean. It was almost always trash, which of course, led to a CNN obsession with sea trash.

“Breaking”: Thirty one days into the mystery and CNN reports on this bit of “breaking news”: “Families Frustrated by Media Coverage.” 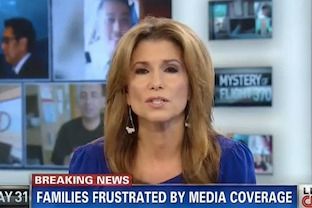 A Confession: The final embarrassing CNN incident didn’t happen on air. In a March 17 New York Times article about the networks’ coverage of the flight, an executive anonymously “acknowledged this was not really a story where reporters have been able to advance the known facts much.” But, as of this writing, CNN is still going.

THE FEED
7:04 p.m.
birtherism
birtherism
Trump Revives Racist Birther Conspiracy for Kamala Harris
By Matt Stieb
“I heard it today that she doesn’t meet the requirements,” Trump said of a vice-presidential nominee who was born in Oakland, California.
5:54 p.m.
labor
labor
Bill de Blasio Is Picking a Fight He Might Not Be Able to Win
By Sarah Jones
The mayor wants to reopen school buildings whether teachers like it or not.
5:12 p.m.
vision 2020
vision 2020
How Trump Is Trying to Ensure an Early Election Night Lead
By Ed Kilgore
Trump’s demonization of voting by mail has convinced his fans to vote in person, which could skew the early returns and lead to a contested election.

5:08 p.m.
vision 2020
vision 2020
All the Juicy Details About Joe Biden’s Vice Presidential Selection Process
By Matt Stieb
Whitmer reportedly attempted to drop out of the vetting process, which involved a team of as many as 15 attorneys scouring the candidates’ pasts.
4:40 p.m.
vision 2020
vision 2020
Supreme Court Lets Rhode Island Relax Voting by Mail Requirements
By Ed Kilgore
After refusing to require accommodations for voting in a pandemic, the Court did allow states to do so themselves.
2:47 p.m.
foreign interests
foreign interests
UAE Strikes Peace Deal With Israel, Sells Out Palestinians
By Eric Levitz
In exchange for a promise that Israel won’t immediately illegally annex the Jordan Valley, Abu Dhabi normalized relations with the Jewish state.
2:19 p.m.
coronavirus stimulus
coronavirus stimulus
Stimulus Talks Likely Dead Until September
By Ed Kilgore
Republicans won’t budge on the overall scope and cost of the package, and Democrats feel like they have all the leverage. So nothing’s shaking now.
12:14 p.m.
covid-19
covid-19
The Coronavirus Was Found on Frozen Chicken Wings
By Erica Schwiegershausen
Chinese authorities say the meat was imported from Brazil.
11:45 a.m.
vision 2020
vision 2020
Trump Admits He’s Starving the Postal Service to Sabotage Voting by Mail
By Ed Kilgore
Trump is tampering with the November election in plain sight by trying to inhibit perfectly legal voting by mail and plotting to contest a defeat.
10:50 a.m.
the economy
the economy
As Big Business Feasts on Cheap Credit, Small Firms Starve
By Eric Levitz
And Congress isn’t coming to the little guys’ rescue anytime soon.
10:42 a.m.

Steep personnel cuts could be coming to NYC municipal employees

“If you’re going to keep cutting and keep cutting, it has to at some point reach personnel. It’s just pure logic of budgets, and it’s very sad logic. I don’t like it one bit, and I want to avert this at all costs. So that 22,000 number is painfully real,” he said.

De Blasio has been hoping for a multi-billion dollar federal aid package to bail out the city after the coronavirus pandemic decimated its bottom line. But he acknowledged Wednesday that “appears to be dead now.”

This qualifies as good news now

U.S. jobless claims come in at 963,000. First week in months they’ve been below a million. @BloombergRadio
—@nhageradio
9:45 a.m.
pandemic prescriptions
pandemic prescriptions
The European Cities Using the Pandemic As a Cure for Airbnb
By Vincent Bevins
With tourism at a low ebb, Lisbon, Barcelona, and other cities are moving to bring balance back to their housing market.
9:28 a.m.

Yet another grim milestone

On Wednesday, the country reported its highest number of deaths in a single day since mid-May, at nearly 1,500. The country has now seen its seven-day average of newly reported deaths remain above 1,000 for 17 consecutive days.

… In the letters, “Kim describes the bond between the two leaders as out of a ‘fantasy film,’ as the two leaders engage in an extraordinary diplomatic minuet,” according to a description of the book posted on Amazon.

After complaints from President Trump that he can’t wash his “beautiful hair properly” due to “drip, drip, drip” shower heads, the Trump administration is *formally* moving to roll back shower head regulations set in 1992 by Pres. George HW Bush.https://t.co/HbXpOpQf5O
—@SteveKopack
8/12/2020
ghislaine maxwell
ghislaine maxwell
Ghislaine Maxwell Complains About Conditions in Brooklyn Jail
By Benjamin Hart
Following the suicide of Jeffrey Epstein, guards are apparently not taking any chances with his alleged fixer.
8/12/2020
coronavirus stimulus
coronavirus stimulus
Will We Get a Second Round of COVID-19 Stimulus Checks?
By Ed Kilgore
Dems called for another round of $1,200 checks, and now the GOP is proposing something similar. But the timing is iffy and negotiations are complex.
8/12/2020

NEW- Kanye West met with Jared Kushner last weekend in CO, as West continues with an effort he has indicated is aimed to harm Biden. https://t.co/DsVj58HrnS
—@maggieNYT
8/12/2020
police reform
police reform
The Window for Major Police Reform May Be Closing
By Zak Cheney-Rice
The superficial consensus in polls demonstrating that the public supports police reform hides deeper issues.
8/12/2020
intelligencer chats
intelligencer chats
What Kamala Harris Brings to the Ticket
By Jonathan Chait and Benjamin Hart
Her flawed campaign also showcased many of her strengths — like going on offense.
8/12/2020

Grim economic outlook for the U.K.

The U.K. recorded a steeper second-quarter contraction than its peers, a performance that means it suffered the worst economic hit from the coronavirus in Europe as well as reporting the highest death toll.

The economy is already recovering as restrictions on daily life ease and workers trickle back to factories and offices, recent data show, but Bank of England officials have warned that it could take until the end of 2021 to regain the ground lost during the pandemic.

U.K. gross domestic product shrank 20.4% in the second quarter, equivalent to an annualized rate of 59.8%, the country’s statistics agency said Wednesday. Over the same period, the U.S. and Germany lost around 10% of their output, with Italy losing 12%, France 14% and Spain 19%.

U.K. Economy Shrinks by More Than Any Other Rich Country
—WSJ
8/12/2020
vision 2020
vision 2020
Election Funding Is Being Held Hostage in Stimulus Standoff
By Ed Kilgore
We are drifting toward a general election that could crash state and local election systems, and it’s looking like Republicans are fine with that.
8/12/2020