It’s been nearly 50 years since New York enacted the law that protects its landmarks, and the Museum of the City of New York’s “Saving Place” exhibition looks back on that record of rescue. The most self-evident work has been done: Old, precious buildings soldier on under legal protection, and all five boroughs are daubed with historic districts where construction is severely restricted. Decisions by the Landmarks Preservation Commission are regularly met with outrage, but New York is no longer divided into preservationists and everyone else.

Yet even as the celebrations get going, the American Folk Art Museum sits on death row. New debates, over quirky youngish buildings tailored for highly specific use, are trickier than the old. This city is full of adaptable architecture—sugar factories that become condos, sweatshops turned into tech-start-up offices, synagogues made into theaters. Still, Elizabeth Diller, one of the designers of MoMA’s next incarnation, has referred to the Folk Art building as “bespoke” architecture, meaning that the architects Tod Williams and Billie Tsien fitted it so artfully to their client’s needs that it won’t meet anyone else’s.

Time isn’t always kind to innovative design. When occupants move on or functions fade, refined, idiosyncratic buildings become vulnerable. With no consensus about their architectural importance, they can be hard to defend; cumulatively, they provide an antidote to the march of generic efficiency. Consider these six buildings, some of which have been at the center of recent landmarking fights, ­others of which may be in the future. What would you try to save, and why?

Saved By Its Own Idealism
The derelict symbol of global diplomacy needed new everything.
The United Nations may be an icon, but since it’s not technically in the city, or even in the U.S., it can’t be landmarked. And the obvious way to deal with the narrow, cramped, beat-up Secretariat Building (and its low-rise neighbors) was to tear it down. The U.N.’s Vatican-like aversion to change—plus a desire to avoid the international arguments that a new structure would foment—may be what saved it, leading to a $2.1 billion renovation that involved entirely new glass-curtain walls. The Conference Center and General Assembly Building are being restored with similar reverence.
Status: Under Meticulous Renovation 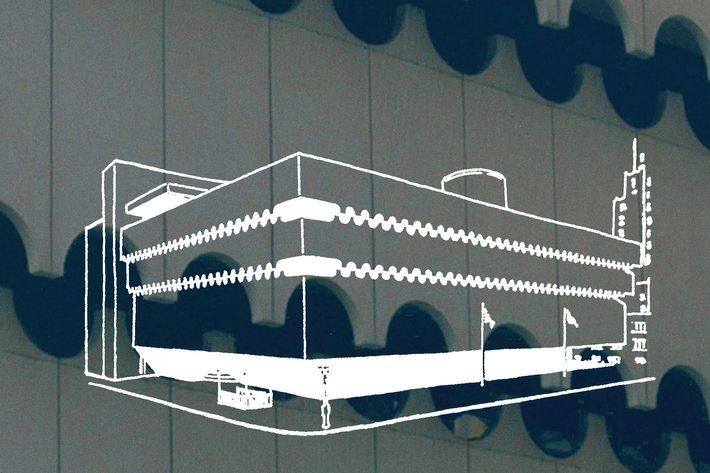 O’Toole Building, by Albert Ledner:
The Accidental Survivor
A Village symbol was sacrificed to a developer but redeemed by bankruptcy.
Built in 1964 for the National Maritime Union, the “Overbite Building” later became the heart of St. Vincent’s Hospital and an icon of the struggle against AIDS. In 2008, the broke hospital’s administrators decided that the building had to go to make way for a larger complex. St. Vincent’s went under before the deal could be consummated, leaving the O’Toole Building in preservation purgatory. Now it’s being reborn as an emergency medical center, its architectural identity crisply restored. Chalk this one up to luck.
Status: Saved and Restored 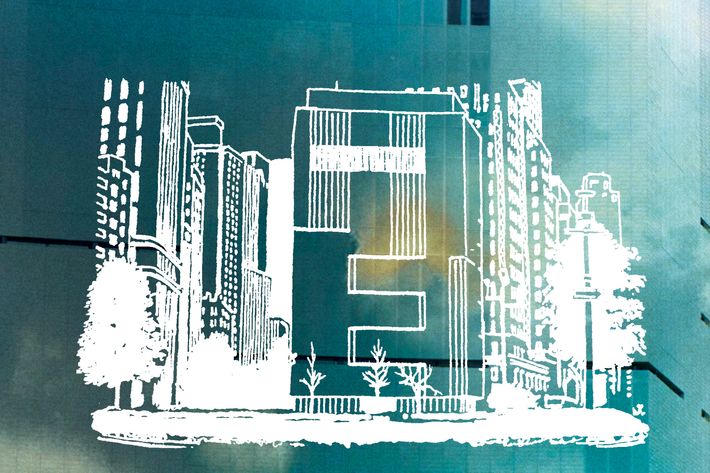 2 Columbus Circle, by Edward Durell Stone:
Hated Too Quickly, Loved Too Late
Its defenders defeated, the late-modern oddball was stripped and reskinned.
When Huntington Hartford’s Gallery of Modern Art opened in 1964, the Times’ Ada Louise Huxtable memorably ridiculed it as a “die-cut Venetian palazzo on lollipops.” Her successor Herbert Muschamp later pinpointed its pre-Stonewall gay life (“The bar poured the swingin’est Singapore sling in town,” he wrote). The gallery closed after just five years, and the building grew seedy. By the 1990s, despite growing support, the Landmarks Preservation Commission refused to even discuss protecting it. In 2005, the Museum of Arts and Design plowed through opposition and gave it a gut renovation and a new façade.
Status: Heavily Altered 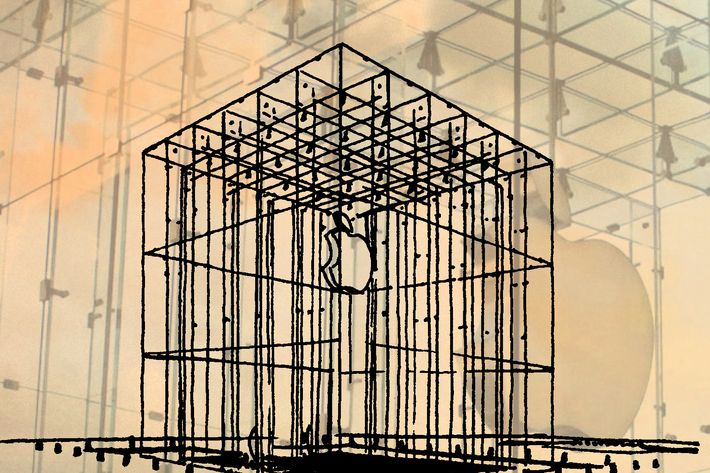 Fifth Avenue Apple Store, by Bohlin Cywinski Jackson:
The Building As Brand
Ultimate minimalism, but would another business ever want an Apple hand-me-down?
The glass cube that opened in 2006 accomplishes a staggering number of architectural tasks. It places a giant Apple logo in a display case, evokes the beloved Power Mac G4, translates a corporate design aesthetic to huge scale, and redeems the GM Building’s grim sunken plaza. In 2011, the pioneering assemblage of 90 sheets of glass was replaced by an even more transparent structure of only 15 pieces. But those qualities are exactly the ones that might make a future tenant balk—especially since one of those immense panes reportedly cost $450,000 to replace when a snowblower shattered it in January.
Status: Unthreatened (For Now) 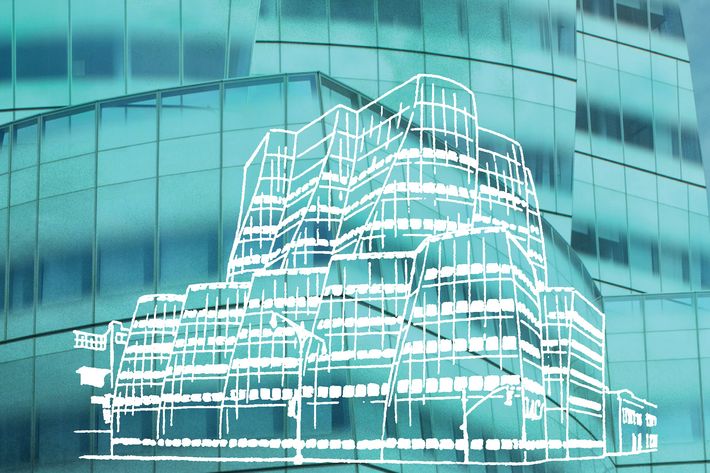 IAC Building, by Frank Gehry:
One Man’s Fantasy
A media mogul’s seat of power may be difficult to sell.
The billowing white-glass schooner anchored at the western edge of Chelsea was commissioned by IAC chief Barry Diller, who has a thing for boats. In an orthogonal city, it dares to wobble and wave. Sure, the interior spaces can be arrestingly odd, but the building carries a message about the company’s defiance of conventional wisdom. However, if IAC’s empire should crumble, Diller retire, or tech get square, who will cherish Gehry’s folly? Glass-curtain walls get old, and future owners may flinch at the appalling expense of replacing all those custom-curved, fritted panes.
Status: Safe Today, But Who Knows? 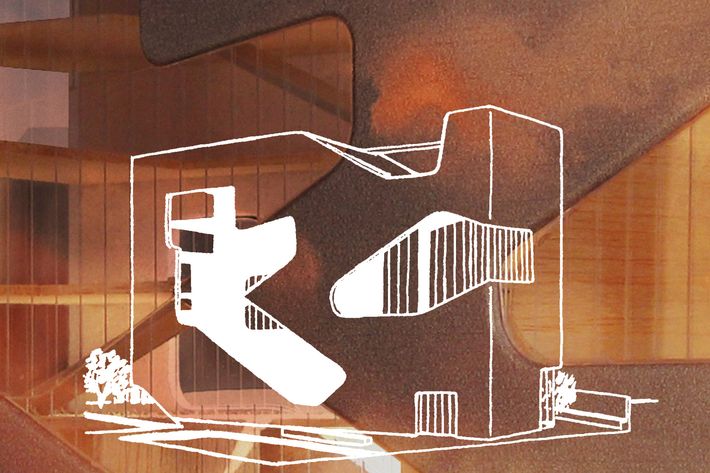 Queens Public Library, by Steven Holl:
A Built-in Identity Crisis
With the public library’s function in flux, a new building could be obsolete even before it’s finished.
Holl’s effusive branch library at Hunters Point isn’t even built yet, and already it seems ­brilliant—and possibly doomed by a wayward budget. The original design with its seemingly hand-carved openings is as much flexible public space as it is book repository. The process for public building being a tortured one, the architecture could go all stolid by the time it’s built, and the conventional wisdom on book spaces is likely to have changed by then, too. Like Eero Saarinen’s TWA terminal at JFK, it could end up as a charmer that doesn’t fit future needs.
Status: Still Unbuilt; ­Potentially Compromised

*This article appeared in the April 21, 2014 issue of New York Magazine.

+Comments Leave a Comment
Davidson on the Tricky Landmark Debates

THE FEED
5:39 p.m.
view from the bunker
view from the bunker
Andrew Cuomo’s Last Play to Hold Onto Power
By David Freedlander
“He is not resigning,” said one ally. “It is just not in his nature to ever do that.”
5:05 p.m.
covid-19
covid-19
What About a Booster Shot Now?
By Paola Rosa-Aquino
With Delta circulating, the question of whether more shots are needed has taken on new urgency. Here’s what we know.
4:23 p.m.
eviction moratorium
eviction moratorium
Conservatives Are Freaking Out About the Eviction Moratorium
By Ed Kilgore
One National Review writer encouraged civil disobedience as a response to Biden’s move.

3:16 p.m.
politics
politics
What Cori Bush Taught the Left
By Zak Cheney-Rice
To move the Democrats, you have to humiliate them.
2:28 p.m.
politics
politics
Trump Nearly Enlisted the Justice Department in His Coup Scheme
By Ed Kilgore
A high-ranking DOJ official wanted to urge GOP legislators to steal Biden’s win, but colleagues rebuffed him. Next time we might not be so lucky.
1:17 p.m.
tokyo olympics
tokyo olympics
Why Can’t the U.S. Men’s Relay Team Pass a Baton Correctly?
By David Gendelman
It crashed out of the Olympics by once again failing at a seemingly simple task.
12:55 p.m.
politics
politics
The Most Powerful Labor Leader in America Has Died
By Sarah Jones
AFL-CIO president Richard Trumka passed away unexpectedly, in a blow to organized labor at a critical time.
12:34 p.m.
the national interest
the national interest
Why Mitch McConnell Is Giving Joe Biden a Bipartisan Infrastructure Win
By Jonathan Chait
I thought Republicans would kill it. Here’s what I got wrong.
12:20 p.m.
explainer
explainer
What to Know About the Cuomo Investigations and Possible Impeachment
By Chas Danner and Nia Prater
The governor is still the subject of multiple state and federal investigations. Here’s where the probes stand, and how impeachment could play out.
11:51 a.m.

A Delta Variant silver lining: more people are getting vaccinated

Thursday just in: +864K doses reported administered over yesterdays total, including 585K newly vaccinated. Highest single day numbers in over a month! Unlike prior waves, we have safe and effective vaccines that can minimize the impacts of COVID-19. Let’s get everyone protected!
—@cyrusshahpar46
11:30 a.m.
evictions
evictions
The Best Thing About the New Eviction Moratorium Is More Time to Get Rent Relief
By Caroline Spivack
But the CDC order will only apply while COVID rates are high.
11:15 a.m.
sports!
sports!
The Best Things We’ve Seen at the Olympics So Far
By Claire Lampen and Mia Mercado
A swim coach horny for gold, teens shredding the skateboarding category, and more.
8:42 a.m.
politics
politics
Cuomo Faces Several New Criminal Probes Over Sexual Harassment
By Nia Prater
DAs from Albany, Manhattan, Westchester, and Nassau requested info from the AG’s office following the release of its report on the governor.
8:00 a.m.
politics
politics
What Is Kyrsten Sinema’s Deal?
By Tom Zoellner
The senator from Arizona puzzles and irks her fellow Democrats in equal measure.
7:00 a.m.
politics
politics
How Is Andrew Cuomo Still Here?
By Rebecca Traister
A shocking new report is a test of his ability to bend reality to his will.
8/4/2021
nyc
nyc
New York City’s Vaccine Mandates Are Working
By Matt Stieb
Vaccinations have increased significantly since Mayor de Blasio announced that city employees must prove they signed up for a shot.
8/4/2021
politics
politics
Andrew Cuomo Didn’t Act Alone
By Ross Barkan
His inner circle enabled him. They should go down with their leader.
8/4/2021
federal rental assistance
federal rental assistance
Stalled Rent Relief Is a Glimpse Into the Flaws of Federal Aid Distribution
By Ed Kilgore
The failure to speedily deliver $47 billion in aid to renters shows the flaws of routing benefits through fragmented state and federal programs.
8/4/2021
intelligencer chats
intelligencer chats
The Tokyo Olympics Haven’t Felt Like Must-See TV
By Jen Chaney and Benjamin Hart
Blame it on the time difference, the pandemic, the lack of a unifying star, or all of the above.
8/4/2021
politics
politics
Andrew Cuomo’s Big Gross Book of Touches
By Choire Sicha
If you thought the governor’s COVID memoir was bad, just take a look at this.
8/4/2021
politics
politics
Silly Season Arrives in Senate As Major Legislation Advances
By Ed Kilgore
Get ready for “messaging amendments” and “vote-a-ramas” as pointless debate precedes passage of the infrastructure bill and the budget resolution.
8/4/2021
politics
politics
Cuomo Faces Impeachment, Criminal Charges After Sexual-Harassment Report
By Justin Miller and Laura Nahmias
The governor is accused of preying on 11 women, retaliating against one, and breaking state and federal laws.
8/4/2021
the national interest
the national interest
Tucker Carlson Has Seen the Future, and It Is Fascist
By Jonathan Chait
An important marker on the Republican road to authoritarianism.
8/4/2021
explainer
explainer
What We Know About the Dangerous Delta Variant
By Chas Danner and Paola Rosa-Aquino
The more transmissible COVID strain now accounts for an estimated 93 percent of new cases in the U.S.
8/4/2021

Poll: 63% of New York voters say Cuomo should resign
—Axios
8/4/2021
mccloskeys
mccloskeys
Gun-Waving McCloskeys Get Pardoned
By Benjamin Hart
It’s nice to have sympathizers in high places.
8/3/2021
politics
politics
Nina Turner Learns the Hard Way That Democrats Like Joe Biden
By Ben Jacobs
The lefty hopeful blew a race for Congress when it turned into a referendum on her disdain for party leaders.