In this age of “Everything is a Hoax,” internet trolls are generally expected to be pathetic grown men with nothing better to do and/or something to sell. So when an alleged 14-year-old Dutch girl named Sarah got the attention of the world on Sunday by hinting at a terrorist attack in a tweet to American Airlines, the safe money was on a stunt, or at least a creepy impostor. Nope: Dutch police arrested a teenage girl in Rotterdam this morning.

The international incident started when Sarah, a.k.a. @QueenDemetriax_, sent @AmericanAir the message, “hello my name’s Ibrahim and I’m from Afghanistan. I’m part of Al Qaida and on June 1st I’m gonna do something really big bye.” The airline, as usual, promptly responded: “Sarah, we take these threats very seriously. Your IP address and details will be forwarded to security and the FBI.”

Sarah then melted down, but couldn’t help but be pleased by all the newfound attention. It was a real-time look into the troubled mind of a troll: 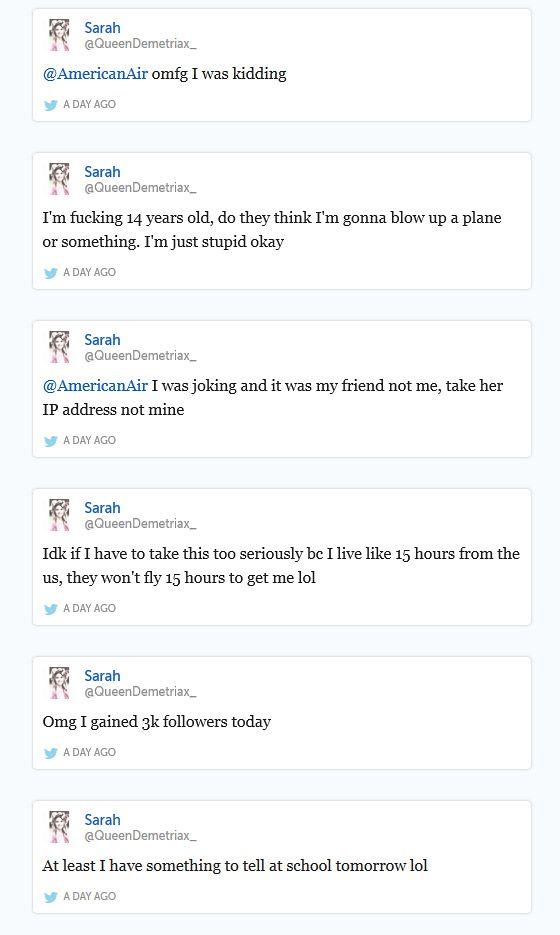 The entire saga is Storify-ed here.

“We’re not in a state that we can communicate any state of charges at this point,” police in the Netherlands told Business Insider in a statement. “We just thought it was necessary to bring this out mostly because of the fact that it caused a great deal of interest on the internet.” Sarah’s account has since been suspended, so she doesn’t even get to keep the followers.