It’s finally here: George W. Bush’s first solo show as a painter opens today at his presidential museum in Texas. Fittingly for the dynastic family, the world’s first look at the work comes via a Today show interview with his daughter, Jenna Bush Hager, who got a tour of gallery, which features 24 oil portraits of world leaders. First up, right through the door: father and son. 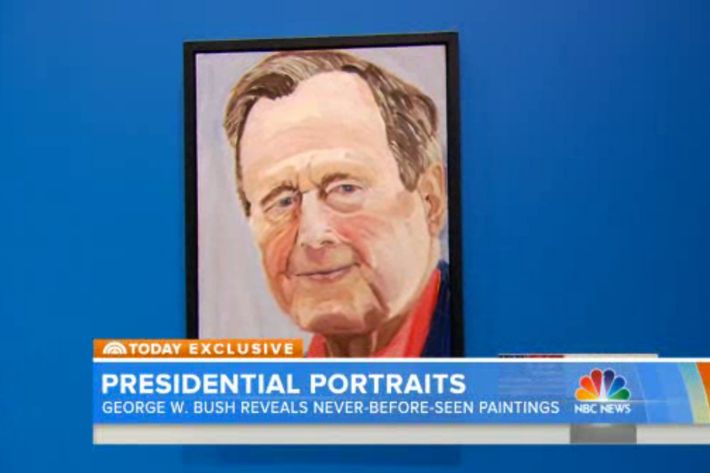 A teary-eyed W. talked of painting his father, “a gentle soul” and a “great listener,” but admitted he hasn’t shown the tribute to his parents. “I didn’t dare show it to him because then Mother would see it,” said the 43rd president of the United States. “And then of course — no telling what she would say.” 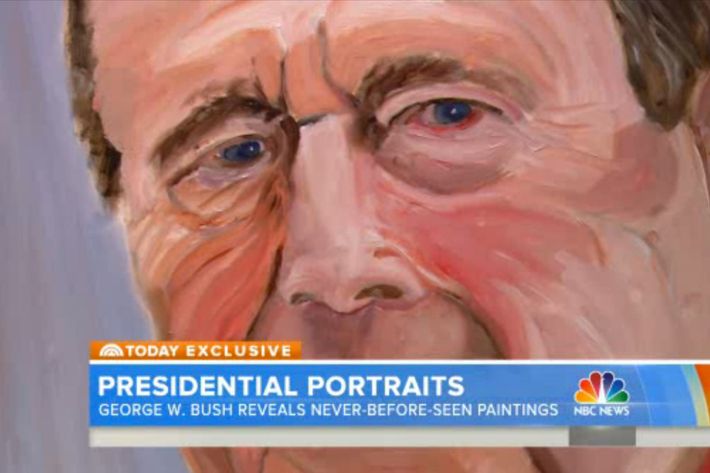 Other highlights include Bush’s diplomatic buddy Tony Blair. “I think I told Tony I was painting, and he brushed it off,” said Bush. “That was an art pun.” 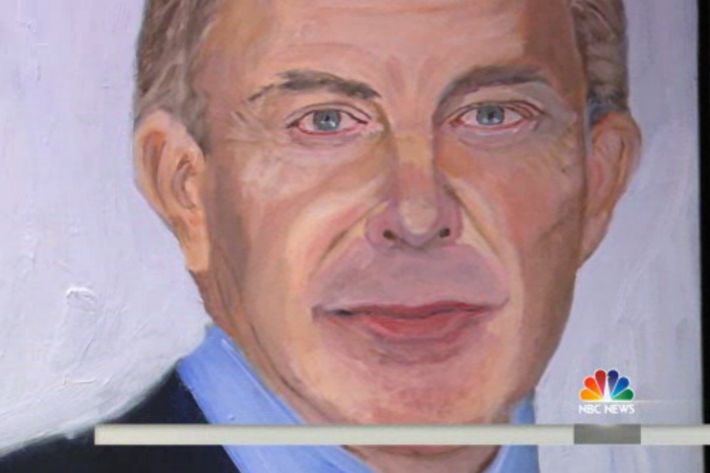 And Vladimir Putin, who probably thinks painting is for pansies (or whatever the more offensive Russian word for that is): 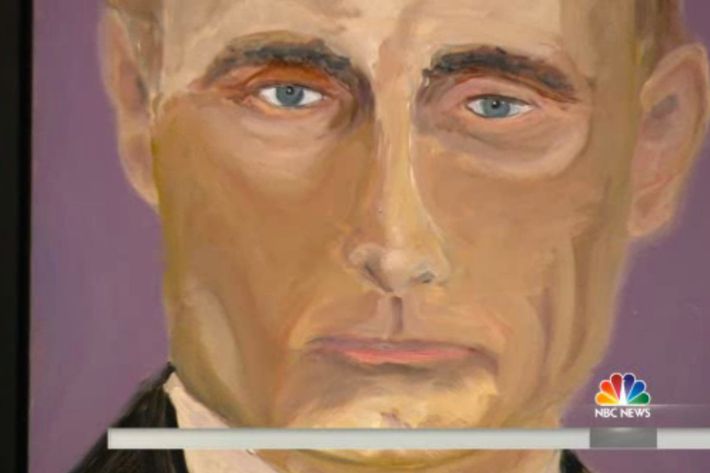 “I wanted to make sure that the last chapters of my life were full,” said Bush to his daughter. “Painting would occupy not only space but open my mind.”

But it all started with an iPad app called Penultimate. The early work: 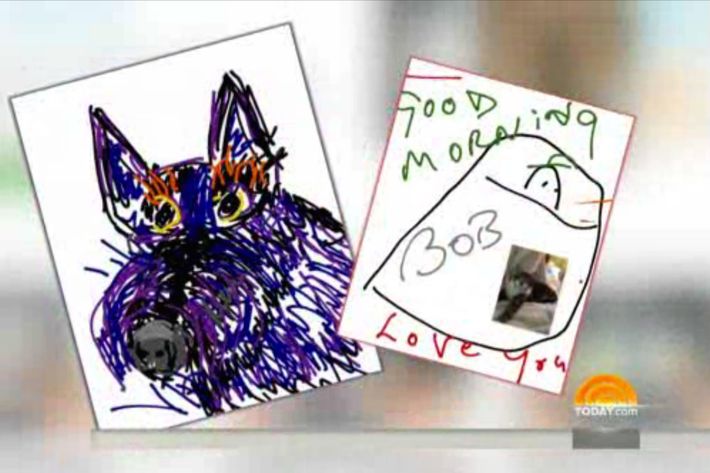 “There’s a Rembrandt stuck in this body,” Bush told the woman who would become his instructor, “and it’s your job to unleash it.” 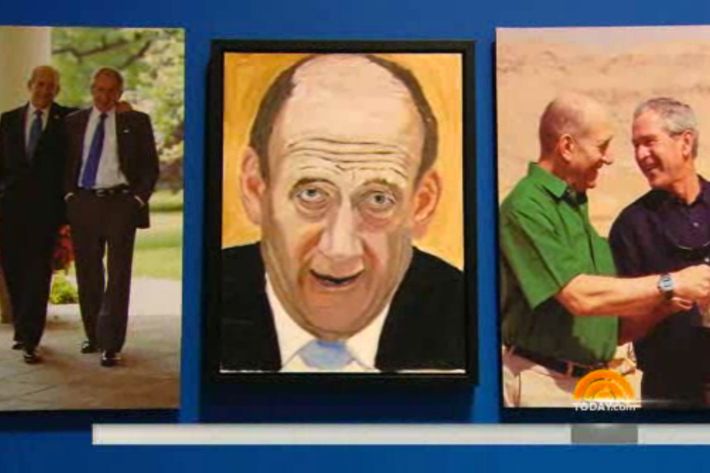 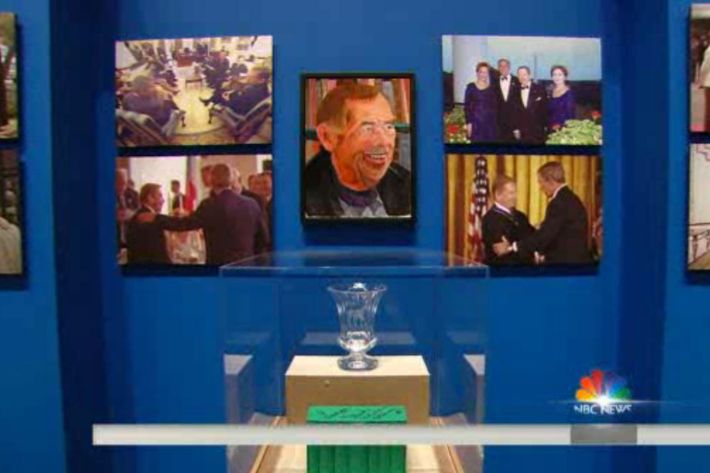 In addition to the portraits, Bush continues to work on landscapes: 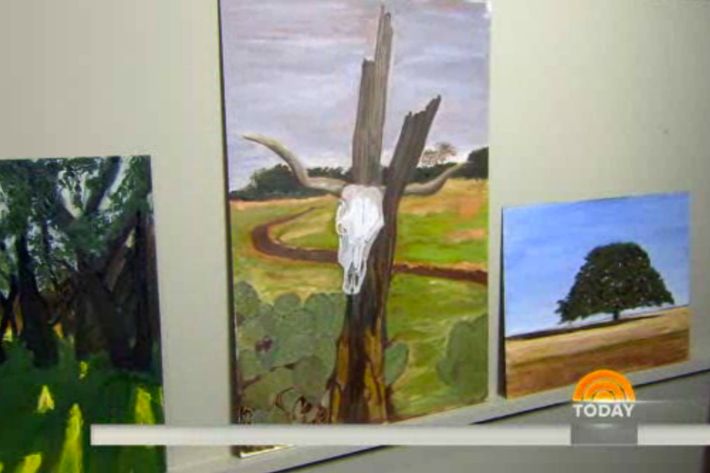 And, of course, his pets: 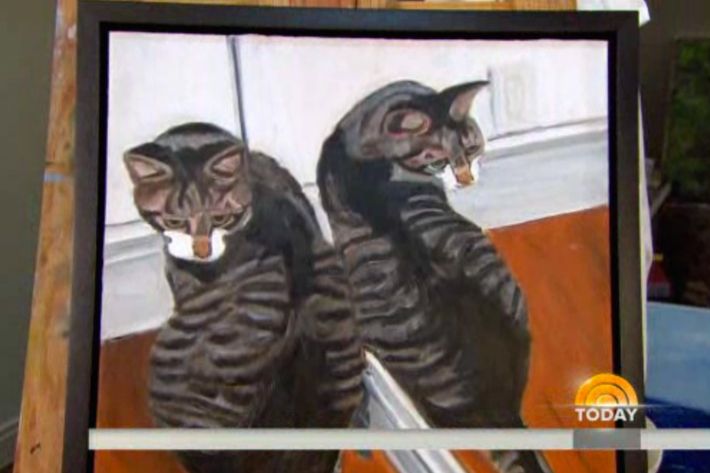 The one person we never see interpreted artistically: Laura, who appears cautiously amused. “Don’t paint your wife,” said the artist. Putin, he can handle; the women in his life, not so much.

A committee led by Michigan Republicans on Wednesday published an extraordinary debunking of voter fraud claims in the state, delivering a comprehensive rebuke to a litany of accusations about improprieties in the 2020 election and its aftermath.

The 55-page report, produced by a Michigan State Senate committee of three Republicans and one Democrat, is a systematic rebuttal to an array of false claims about the election from supporters of former President Donald J. Trump. The authors focus overwhelmingly on Michigan, but they also expose lies perpetuated about the vote-counting process in Georgia.

The report is unsparing in its criticism of those who have promoted false theories about the election. It debunks claims from Trump allies including Mike Lindell, the chief executive of MyPillow; Rudolph W. Giuliani, the former president’s lawyer; and Mr. Trump himself.

6/23/2021
the city politic
the city politic
The Mayor’s Race Isn’t (Quite) Decided Yet
By David Freedlander
Adams is still the overwhelming favorite — but at least one other candidate still has an outside chance.
6/23/2021
u.s. supreme court
u.s. supreme court
‘Cussing Cheerleader’ Wins in Supreme Court Free-Speech Case
By Ed Kilgore
The Court decided 8-1 that obscene student tirades made on social media are protected unless they disrupt public-school activities.
6/23/2021
voting rights
voting rights
Democrats’ Voting Rights Push Stalled. It Was Still Worth It.
By Ed Kilgore
The effort to enact the For the People Act was a smart investment that will pay off richly for Democrats.
6/23/2021
politics
politics
It Looks Like Buffalo Will Have a Socialist Mayor
By Sarah Jones
India Walton is likely to defeat incumbent Byron Brown in a major Democratic primary upset.
6/23/2021
the national interest
the national interest
Republicans Say Voting Protections Trample ‘States’ Rights.’ Uh-Oh.
By Jonathan Chait
The chilling future implications of a very old argument.
6/23/2021
politics
politics
Can Eric Adams Hold On to His Lead?
By Ben Jacobs
What the first results of the mayoral race mean for him and his opponents.
6/23/2021
georgia
georgia
Welcome to Georgia, Where Election ‘Integrity’ Goes to Die
By Zak Cheney-Rice
Brad Raffensperger’s incomprehensible position in the party of Trump.
6/23/2021
israel
israel
My Grandfather the Zionist
By Abraham Riesman
He helped build Jewish American support for Israel. What’s his legacy now?
6/22/2021
2022 midterms
2022 midterms
Will Young and Minority Voters Save Democrats in 2022?
By Ed Kilgore
With or without some help from Donald Trump, Democrats need to keep the voters who surged to the polls in 2018 and 2020 engaged.
6/22/2021
covid-19
covid-19
U.S. Falls Short of Biden’s July 4 Vaccination Goal
By Paola Rosa-Aquino
The White House tried to put a positive spin on the figures but admitted it will take a “few extra weeks” to fully vaccinate 70 percent of adults.
6/22/2021
voting rights
voting rights
Believe It or Not, Some States Are Making It Easier to Vote
By Ed Kilgore
Amid the outcry over Republican-led states restricting voting opportunities, some states are moving in the opposite direction.
6/22/2021
pivot
pivot
American Airlines Shouldn’t Have Been Bailed Out
By Intelligencer Staff
Despite getting billions in loans, the company furloughed thousands and is now contending with a worker shortage.
6/22/2021
covid-19
covid-19
Nursing-Home Deaths Increased Exponentially Last Year
By Sarah Jones
The toll of COVID is becoming clear.
6/22/2021
the national interest
the national interest
Kyrsten Sinema’s Filibuster Defense Is Factually Untrue
By Jonathan Chait
Moderate senator loves the supermajority requirement, doesn’t understand how it works.
6/22/2021
politics
politics
Why There Could Be No Winner on Election Night
By Nia Prater
New York City’s experiment in ranked-choice voting begins.
6/22/2021
nyc mayoral race
nyc mayoral race
Why Progressive New Yorkers Should Rank Yang Over Adams
By Eric Levitz
Vote for the unqualified cipher (as your fifth choice). It’s important.
6/22/2021
explainer
explainer
What We Know About the Dangerous COVID B.1.617.2 Delta Variant
By Chas Danner and Paola Rosa-Aquino
The more transmissible strain has spread to more than 90 countries, fueled numerous rapid outbreaks, and will likely become dominant in the U.S.
6/21/2021
pride month
pride month
Carl Nassib Is the NFL’s First Active Out Gay Player
By Bethy Squires
“I’ve been meaning to do this for a while, but I finally feel comfortable enough to get it off my chest.”
6/21/2021
games
games
The NCAA Looks Like a Dead Organization Walking
By Will Leitch
Justice Brett Kavanaugh, of all people, has stuck a dagger into college sports’ unjust business model.
6/21/2021
the city politic
the city politic
The Race for Mayor Has Gone Absolutely Berserk
By David Freedlander
Yang and Garcia team up. Adams cries victim. Wiley goes after them all.
6/21/2021
mayor's race
mayor's race
How Kathryn Garcia Campaigned in the Race’s Final Hours
By Ben Jacobs
She embraced her alliance with Andrew Yang — when she was talking to his voters.
6/21/2021
2022 midterms
2022 midterms
Anti-Government Extremist Ammon Bundy Joins Wild Governor’s Race in Idaho
By Ed Kilgore
Bundy and Lieutenant Governor Janice McGeachin could compete for the militia vote in a 2022 gubernatorial race that may not have an incumbent.
6/21/2021
nyc mayoral race
nyc mayoral race
Adams Likens Garcia-Yang Pact to Jim Crow
By Benjamin Hart and Nia Prater
According to the mayoral front-runner, the standard tactic of forming a strategic alliance is akin to voter suppression.