LOOK HOW HUGE WE ARE. WE HAVE SIGNS AND EVERYTHING. Photo: TIMOTHY A. CLARY/AFP/Getty Images

Counting tech workers in New York City must be a fascinating activity, because boy, do people keep doing it. In the last few years alone, at least a half-dozen groups have tried to categorize and count the various app-builders and screen-starers in the city’s tech industry, and they’ve come up with numbers all over the map. The Center for an Urban Future pegged the number at 52,900, or roughly a Yankee Stadium full of tech geeks. The Bloomberg Tech Summit put it at about five Yankee Stadiums – 262,000 jobs.

But a new report released yesterday tops them all in terms of boosterish enthusiasm. Like many of the reports that came before it, this one is filled with exaggerations, mathematical sleights of hand, and charts that make me think that while New York’s tech industry might be doing pretty well, its statistics industry has some catching up to do.

Here are four ways you can inflate your city’s tech population, if that’s your goal:

The new report [PDF], which was commissioned by the Association for a Better New York in conjunction with Google, Citigroup, and the New York Tech Meetup, claims that 291,000 jobs (six Yankee Stadiums!) are located in New York’s “tech ecosystem,” defined as all the jobs “that are enabled by, produce, or facilitate technology.” Most of these tech jobs aren’t even in tech proper – they’re at banks, insurance companies, hospitals, and other non-tech employers. And of the people who do actually work at tech firms, fewer than half are working in actual tech jobs inside those firms. Here’s the breakdown:

In defining tech, the report’s compilers have made New York’s tech industry a relatively meaningless category. For example, here are some of the occupational codes that are considered “tech” jobs:

Sure, you could argue that a HBO employee who edits Girls works in tech since she uses a computer to do her job. But then again, so does a Starbucks barista. Are baristas tech workers?

2. Fudge the scale on your charts.

There’s also some garden-variety chart silliness in the report. For example, here is a series of pie charts with a pretty misleading scale. (That little blue slice in the middle should be bigger than the entire leftmost pie!) If you just looked at the series and ignored the “not to scale” caveat in tiny print at the bottom, you might think that New York’s tech industry contains the same number of jobs as the rest of the city’s industries combined. Needless to say, you’d be wrong.

3. Optimize the formula for your city’s benefit. 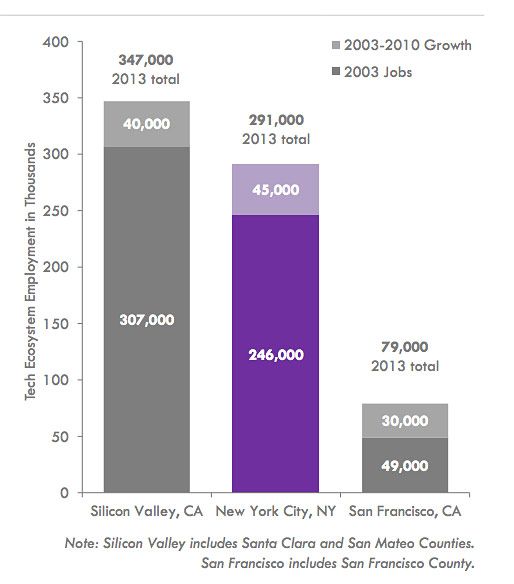 The report uses the same methods to count West Coast tech workers as it does in New York, meaning that all those Silicon Valley ad-sales and film-editing jobs get lumped in as well. Which would be fine, except that, well, Silicon Valley doesn’t have much of a film-editing industry. It turns out that in casting a wide net for tech workers, the report’s creators ended up creating a rubric that was optimized to make New York’s tech industry look as large as possible.

4. Ignore the measurements that really matter.

The truth is that the New York tech ecosystem, no matter how you define it, only “dwarfs” the West Coast tech scene in the sense that New York itself dwarfs the city of San Francisco, with a population ten times larger. On any other measure – tech workers per capita, venture capital dollars raised, private market valuations, billion-dollar exits – New York’s tech scene is a relative runt. And in no way does Silicon Alley compete with Silicon Valley when it comes to the most meaningful measure of tech growth: the amount of money pouring into tech start-ups in the region.

Here is a chart from last year’s MoneyTree/National Venture Capital Association report on venture capital funding. See that big bar? That’s Silicon Valley, whose tech companies attracted about four times as much money in 2013 as tech companies based in the New York metropolitan area, and did roughly three times as many deals. New York comes in third in the venture capital race, after New England and just ahead of L.A. 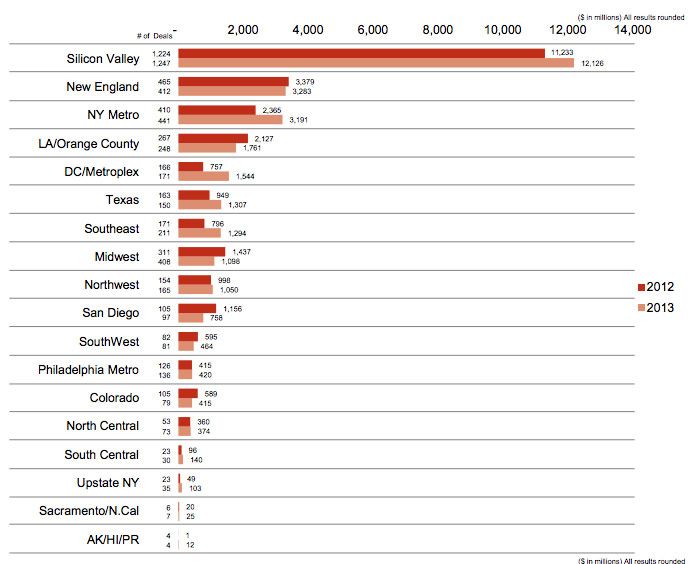 I’m not faulting New York for advertising its tech economy, or Google et al. for wanting to show the city’s emerging tech scene in its best light. And, to be fair, some of the faults with the new study are more related to the way the Bureau of Labor Statistics categorizes jobs in the first place than any mischief on the researchers’ parts. But more of the shortcomings spring from the same inferiority complex that has given rise to all of the other New York tech studies. Bottom line: If you have to brag about the size of your tech scene, it probably isn’t all that big.