I tried to assemble as much evidence as I could to bolster my magazine essay about racial politics, but there was one piece I couldn’t measure: my sense that the argument between Bill Maher and Bill Kristol reflected deeper beliefs among Republicans and Democrats across the country, that “every Obama supporter believes deep down, or sometimes right on the surface, that the furious opposition marshaled against the first black president is a reaction to his race.”

The polling firm YouGov has actually gone ahead and polled the exact language in my story, asking Americans if they believe “the furious opposition marshalled against the first black president is a reaction to his race.” 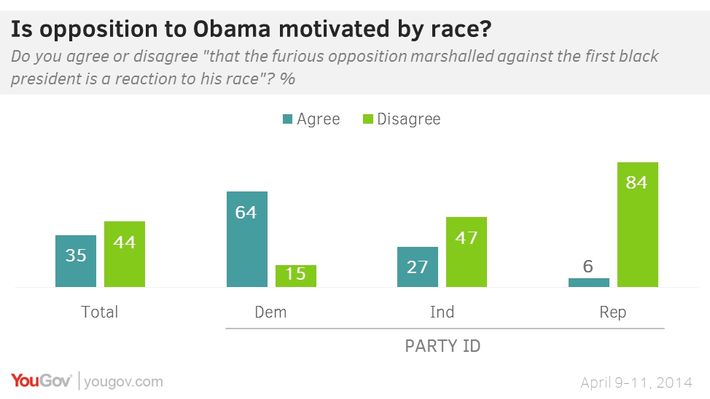 (I did not ask YouGov to do this poll; I found out about it when it appeared online.) It turns out Democrats agree, 64 percent-15 percent, while Republicans disagree, 84 percent-6 percent. Woo-hoo!

YouGov also provided an interesting racial breakdown. Some of my critics on the left have asserted that the article only describes the views of white people, which is false. It is true that the article describes a split in public opinion that runs along partisan rather than racial lines, and the reason is that white and nonwhite Democrats have come to share a fairly similar perspective. Sure enough, white and nonwhite Democrats report nearly identical levels of agreement: 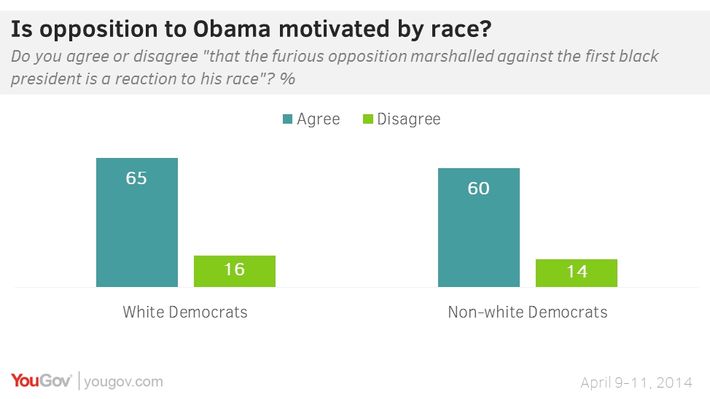