U.S. Secretary of Education Arne Duncan may perceive the much ado being made over this year’s New York state standardized tests as “drama and noise,” but the city’s school leaders and their constituents are fighting back.

Today, hundreds of slogan-toting principals, teachers, parents, and students took to the streets to protest what they say are flawed and ambiguous English language and arts tests administered last week to kids as young as third grade. (Math assessments are scheduled for the end of this month.) Elizabeth Phillips, principal of the much-beloved P.S. 321 in Park Slope, sounded a loud post-test alarm last Friday, calling on her school community to show their dissent. Now it’s spreading. 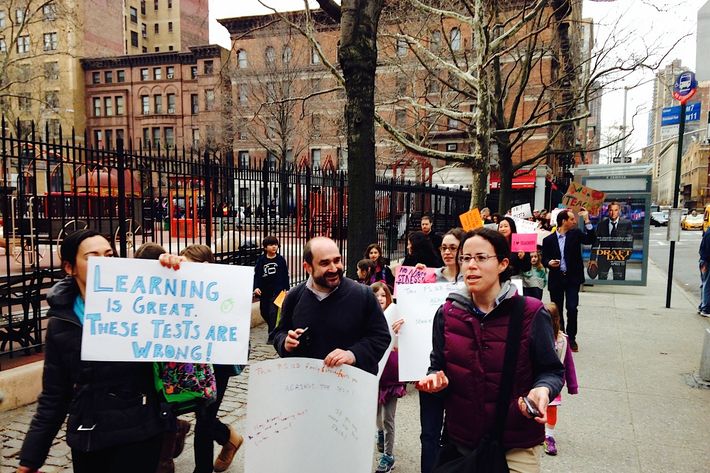 Worried Phillips would appear to be a lone voice — and the complaints would be easily overlooked — other principals are now following suit. “I thought, Go Liz, that’s great. But what really triggered the rest of us was having [her concerns] dismissed … as representing just a tiny fraction of families affected by the ELA,” says Adele Schroeter, the principal of P.S. 59 on East 56th Street, who helped rally colleagues in District 2. “I thought, just because the rest of us aren’t demonstrating doesn’t mean it’s okay.”

Monica Berry, the principal at P.S. 87 on the Upper West Side, says she was moved to join in after hearing that dozens of schools were formally mobilizing: “If silence is being interpreted as acceptance, then we needed to say something,” she says. “We’re the ones who’ve seen the tests. So it should come from within. We’re the ones who know.”

Last year’s exams, designed by Pearson, which has a $32 million contract with the state and were the first to adhere to Common Core requirements, garnered lots of heat for being overly long, riddled with product placement, and including confounding questions that, to many educators, were “inappropriately difficult.” 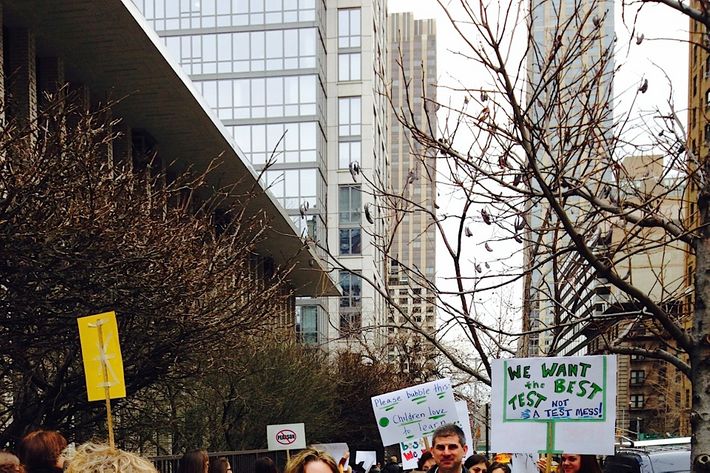 This year, says Schroeter, they’re even worse. “Last year, everyone was ready for it to be a fluke. People thought, okay, first year, first time out, it’s going to be a mess. And by the time this year rolls around, people thought, ‘Oh, they’ve had time to get it together and make a better assessment,” she says. “But it just wasn’t. You’re skimming through the booklet and going, ‘What? Wait a minute.’”

She said her teachers reported that students found the exams “demoralizing” and “frustrating.” Rather than evaluating reading comprehension skills, Jenny Bonnet, principal of P.S. 150 in Tribeca says they were “more [about] having [students] have to flip back and forth and look at structural things versus having a deep understanding of what the passage is about … When I first looked at the test, I was just in shock. I was having trouble with my fellow teachers — we sat around and tried to answer some of the questions — and I thought, This is ridiculous. I’m an adult, I should be able to answer these questions. If it’s hard for me, these poor kids — they must be incredibly confused.” 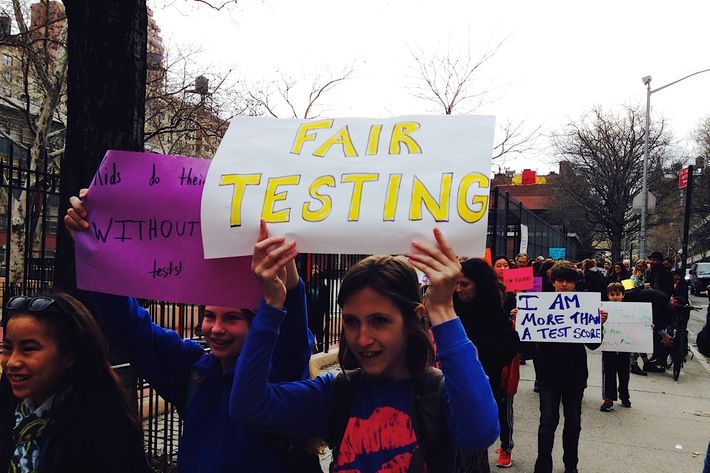 Principals and their staff can’t discuss specifics of the test because they’re barred from doing so by a “gag order” — another major concern. Neither teachers nor parents see the results in their entirety. The stakes are higher this year, too, because not only do results determine, in some cases, where kids can apply to middle schools, but they’re also linked to school and teacher evaluations. “The level of agitation is growing,” says Schroeter. “Not only were the expectations and the standards raised, and the tests made more difficult, the stakes attached to them became higher and higher.”

The end goal? Transparency, say its critics. And hopefully “more collaboration on designing a test that’s a little more reflective of the kind of instruction that’s really good,” says Schroeter. “The Common Core aspires to thoughtful stuff, but it needs to be thoughtfully applied. They’re not little graduate students, they’re 8.”

THE FEED
11:45 a.m.
what we know
what we know
Texas School-Shooting Investigation Descends Into a Mess
By Intelligencer Staff
Officials give contradictory statements and parents say they were ignored and arrested trying to save their children.
10:50 a.m.
the national interest
the national interest
Republicans Block Bill to Monitor Their Violent Allies
By Jonathan Chait
“Domestic extremists — hey, that’s us!”
8:00 a.m.
just asking questions
just asking questions
A Different Way to Prevent Mass Shootings
By Benjamin Hart
Talking with Mark Follman, whose new book explores how behavioral threat assessment could help a country paralyzed by gun violence.