Nobody does this to his car for fun alone. Photo: Justin Sullivan/Getty Images

Wired’s cover story this month is about the rise of the “sharing economy” — a Silicon Valley–invented term used to describe the basket of start-ups (Uber, Lyft, Airbnb, et al.) that allow users to rent their labor and belongings to strangers. Jason Tanz attributes the success of these start-ups to the invention of a “set of digi­tal tools that enable and encourage us to trust our fellow human beings,” such as bidirectional rating systems, background checks, frictionless payment systems, and platforms that encourage buyers and sellers to get to know each other face-to-face before doing business.

Tanz’s thesis isn’t wrong — these innovations have certainly made a difference. But it leaves out an important part of the story. Namely, the sharing economy has succeeded in large part because the real economy has been struggling.

A huge precondition for the sharing economy has been a depressed labor market, in which lots of people are trying to fill holes in their income by monetizing their stuff and their labor in creative ways. In many cases, people join the sharing economy because they’ve recently lost a full-time job and are piecing together income from several part-time gigs to replace it. In a few cases, it’s because the pricing structure of the sharing economy made their old jobs less profitable. (Like full-time taxi drivers who have switched to Lyft or Uber.) In almost every case, what compels people to open up their homes and cars to complete strangers is money, not trust.

To understand why the sharing economy is thriving now, it’s worth taking a look at how many full-time jobs have been replaced by part-time jobs since the recession of 2008: 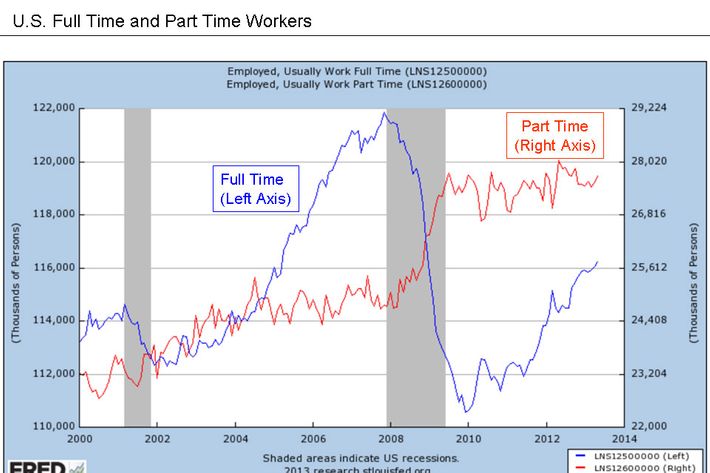 More telling is what’s happened to real wages, which have fallen for middle- and low-income people since the recession:

Add to this the fact that 3.7 million Americans are long-term unemployed (meaning they haven’t had a job in the last six months), and the rise of the sharing economy makes total sense. When wages fall and full-time jobs are hard to get, workers seek out flexible part-time gigs to sustain themselves while they look for something better.

As Sarah Kessler discovered in her Fast Company investigation, it’s hard to make it in the sharing economy. Many of the people renting out their labor and goods through these services will end up making a fraction of what they did at their full-time jobs, and having none of the benefits. Tanz writes that “in the sharing economy, the commerce feels almost secondary.” That may be true for the buyers, but it certainly isn’t true for the sellers, for whom these transactions are often an important source of income.

The title of Tanz’s story is “How Airbnb and Lyft Finally Got Americans to Trust Each Other.” But as Tanz himself notes, the data clearly show that Americans don’t trust each other: One survey, he says, “found that just 41 percent of respondents express ‘a great deal’ or ‘quite a bit’ of trust in the people they hire to work in their home, only 30 percent trust the cashiers who swipe their credit or debit card, and a mere 19 percent trust ‘people you meet when you are traveling away from home.’” So something else must be compelling people to exhibit what he calls “behaviors that would have seemed unthinkably foolhardy as recently as five years ago.” One plausible explanation is that people don’t have a choice: They have to get comfortable with the sharing economy because that’s where the money is.

A narrative about labor-market weakness isn’t as uplifting as one about strangers learning to trust enough other with the help of ride-sharing apps. But it’s a necessary piece of the puzzle. Tools that help people trust in the kindness of strangers might be the thing pushing hesitant sharing-economy participants over the threshold to adoption. But what’s getting them to the threshold in the first place is a damaged economy, and harmful public policy that has forced millions of people to look to odd jobs for sustenance.

+Comments Leave a Comment
The Sharing Economy Is About Desperation